This is a photograph of former Ohio State football hero Maurice Clarett's front seat, after he was arrested in a standoff with police in which he was first Tasered, then Maced because the Taser didn't work (he had on a bulletproof vest):

When you finna throw down on tha playa-hatahs, it's important to be lint-free.

I found this while bumping around in Ted Stevens' tubes. It's a mock-out of both Star Trek and those inspirational posters that have been around for a few decades now: 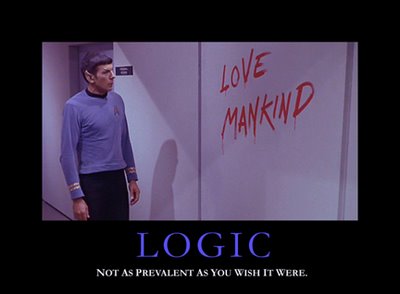 There are many more here.
Posted by PDiddie at Tuesday, August 15, 2006