The duopoly cognitive dissonance has been in full flower lately.  As Trump becomes more unhinged, as the Bernie Sanders/Alexandria Ocasio-Cortez wing of the Democratic Party ascends, the Old Guard feels more threatened, gets more paranoid, and moves closer toward former (?) Republicans like James Comey.  (Wasn't Comey the guy who did that thing with the letter that cost Hillary Clinton the election?)

Here's the Texas Progressive Alliance's roundup of blog posts and news from the week previous.

David Collins strongly advises those suffering from Trump Derangement Syndrome and Russophobia to avoid watering the tree of liberty with hyperbole.

Socratic Gadfly offers detailed thoughts on Robert Mueller's indictment of the GRU 12 and what it does and does not say.

As debate season for the 2016 elections begins to take shape, the Texas Tribune reports that Lupe Valdez has agreed to debate Greg Abbott -- just not on the date that Abbott said he would debate her.  (Abbott, like Rick Perry before him, prefers gubernatorial face-offs that compete with "Friday Night Lights" ... so that few Texans are paying attention.)  Progress Texas notes that Ted Cruz is ducking a debate with Beto O'Rourke in the most Cruz-ish way imaginable.

State Sen. Don Huffines got into a contentious Twitter back-and-forth with state Rep. Poncho Nevarez over the Texas voter/photo ID law and left us with the impression that the harshest, most punitive law of its kind in the US doesn't go far enough.  This is why some observers have concluded that Texas isn't just a non-voting state; it's actively an anti-voter state.

As the week-long trial on the Texas fetal burial law wrapped up, the federal judge who will rule in the case gave indications of three things he will decide upon.

In news of the most ironic, Texas Department of Health employees will be working in a new environment after the building in which they have been located was found to have intolerable amounts of mold.

The Texas Observer reports that the Trump administration is unlawfully mistreating immigrant children at every stage of its detention system, according to new court filings.  Which is a vast understatement of the abuse they are suffering. Seven Texas-based chambers of commerce, two pro-business consortiums and four prominent companies, including Southwest Airlines, filed a court brief asking a federal judge in Houston to reject Attorney General Ken Paxton's argument that the DACA program be ended.  They allege that damage to the Texas economy would amount to tens of thousands of jobs -- and hundreds of millions of dollars in tax revenues -- that would be lost if DREAMers' work status were revoked.

In the wake of the murders committed in Houston by a parolee who had removed his ankle monitor, Grits for Breakfast (and HPD chief Art Acevedo) asked the questions that challenged the conventional wisdom: are ankle monitors making anybody safer?

The discovery of human remains in Fort Bend County -- likely slaves and prisoners who worked on the sugar plantations there in the late 1800s -- made national and international news ... but was not news to one local activist. Neil at We Must Act Right Now posted about confrontation and civility in our politics and society.

Harry Hamid sees something missing from her writing.

And The Rag Blog -- and Threadgill's World Headquarters in Austin -- invites you to Thorne Dreyer's birthday party on August 1. 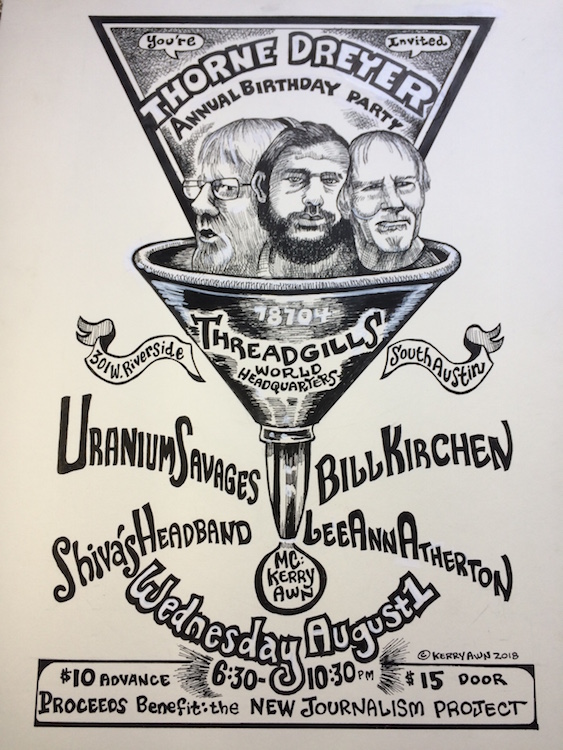