A message from Move to Amend. 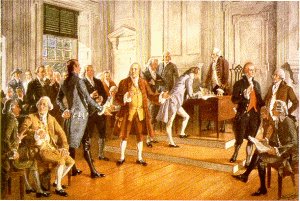 Breaking from the tyranny of the British Empire was an important victory. Most of us have seen the paintings of the Founding Fathers in that historic moment, and heard stories about how our country came to be.

But there’s a problem with those paintings and stories: there are a lot of people missing.

At the time the Constitution was ratified, only about 8% of people living in America qualified as “legal persons.” That means that 92% of people didn’t qualify for those inalienable rights that are supposed to be innate to all human beings – they were too poor, the wrong sex, or not white enough.

That’s a whole lot of people to leave out of a democratic republic.


Today's also the the one-year anniversary of the Occupy movement. On a day when percentages like 47% are all the news, it's important to be reminded that if the 99% all went to the polls in 50 days, the 1% wouldn't matter.

Luckily, though, the 92% weren’t about to take this sitting down. From the Constitution’s adoption, our forefathers and mothers spent decades organizing and agitating to make the promise of American democracy a reality.

Ordinary people are the ones who gave us the political rights that we associate with the Constitution today – they insisted the Bill of Rights be added, and they fought for the additional amendments to secure equality. They also realized that they would not be free until they secured economic democracy as well.

That’s why many states set up laws to hold the most powerful form of concentrated capital in check: the corporation. They legally required that corporations serve the public good, that charters expire after a short period, that yearly revenues be capped, that shareholders be local, and that corporations couldn’t spend a single penny in elections!

These folks were on their way to political and economic equality!

But the wealthy elite fought back too. The Supreme Court made corporations legal persons – before they would acknowledge women’s right to vote and while they approved Jim Crow laws that denied African Americans their rights to equal protection.

So on this year’s Constitution Day, we at Move to Amend ask you to imagine what it would look like if the picture had been different. What if women, the poor, the indigenous and people of color had written the Constitution? What kind of country would they have created? And what would democracy look like if it actually represented all people?

Join Move to Amend in our struggle to amend the Constitution to return human rights back to real people, not corporations – find your local group or start one near you. And then join us as we embark on the even bigger task of creating the kind of democracy we have never actually seen in this country: one where "We the People" – all people – create the world that we want to see.


Local blogger Egberto Willies can answer any question you may have about the Houston effort.

Update: Only tangentially related, PBS has a lengthy interview and video excerpts with former Supreme Court Justice David Souter on the occasion. Here's just one piece, from the end.

The greatest threat to America's republican form of government won't come from foreign invasion, or military coup, he said, but from what he described as "the pervasive civic ignorance" of Americans today.

Because of cutbacks in civic education from the 1970s onward, and exacerbated by the No Child Left Behind law, two-thirds of Americans today don't even know that their country has three branches of government, he said. So they don't know whom to hold accountable for the country's festering problems. "What I worry about is that when problems are not addressed, people will not know who is responsible," he said. "And when the problems get bad enough -- another serious terrorist attack, another financial meltdown -- some one person will come forward and say, 'Give me total power, and I will solve this problem.' That is how the Roman republic fell....That is how democracy dies. And if something is not done to improve the level of civic knowledge, that is what you should worry about at night."

Hoping against hope to end on an upbeat note, I asked: "Do you think we're losing our ability -- which has always animated our belief in the Constitution and our country -- that we are always perfecting our democracy?"

His reply was anything but hopeful. "I don't think we have lost it. I think it is in jeopardy. I am not a pessimist, but I am not an optimist about the future of American democracy," he said. "We're still in the game, but we have serious work to do, and serious work is being neglected right now."


Does he think we still have the capacity to do what the Framers did over the hot Constitutional Convention summer 225 years ago, which was compromise to overcome our differences? Souter paused. "I would like to think that enough examples of non-compromise are going to start people thinking that there must be a better way to try to govern the country," he replied.