Ariza for Artest is a bad deal 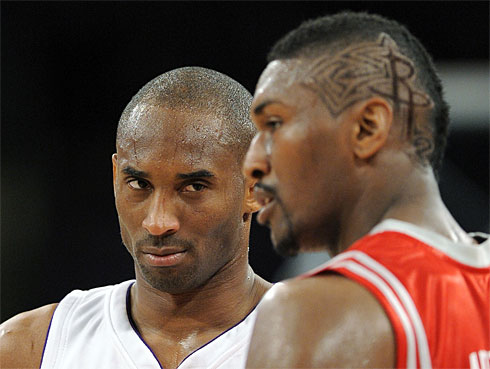 Kobe Bryant always admired that Ron Artest never acted like he wanted an autograph when duty demanded that he defend him. He loved that Artest was combustible and crazy and always left people wondering: Is this the moment when Ron-Ron loses his mind again, when all hell breaks loose?

Deep down, Bryant wanted Artest on his side. Artest gives a thirtysomething Kobe what Dennis Rodman gave a thirtysomething Michael Jordan: A belligerent, tough guy bearing the burden of protecting the superstar’s back.

This is a final insult to the Rockets from LA, worse than getting your nose rubbed in the ground after a bad beating by the neighborhood bully. Ron Artest was the only reason the Rockets made it out of the first round in years, and the only reason they made it to the seventh game. Trevor Ariza isn't half the defensive player, and while he may blossom at some point, will likely also leave after suffering ignominy in H-Town.

(Y)ou can be a star without being a star with the Lakers. When L.A. is winning championships, the role players become commodities. They get endorsements. They get television careers. Ask Rick Fox. Or Derek Fisher. Ariza was an L.A. kid living a dream, 24 years old, a gifted, young talent on the defending champion, and his agent’s bluff backfired.

Now, Artest trades places with Ariza, and the Lakers get a dimension they haven’t had in a long, long time. Perhaps three or four years ago, Artest couldn’t have handled living and playing in L.A. He gives the Lakers sheer nastiness, and as an executive with one of his past teams said Thursday night, “Ronnie will show everyone that he can win. I think he’s matured, and overall, he’ll be on his best behavior. Phil [Jackson] has been through this before with Rodman. He’ll handle this.”

Most here think this is a great trade, but I'm not one of them. And if it also costs them Von Wafer ... Most in the NBA think it's curtains for everybody but the Lakers:

And maybe, in some ways, that won’t be the worst thing in the world for the Lakers. Chaos? That’s letting your agent’s agenda and big mouth get your butt shipped from the Los Angeles Lakers for lottery land in Houston. Kobe Bryant had been willing to take back his whole team, but Ariza made the mistake of giving the Lakers what they always wanted, what they always believed was available to them: the combustible and crazy Ron Artest.

Kobe Bryant gets his Rodman now, and yes, this is how all hell breaks loose in Hollywood.

All hell is probably going to be a lot more fun than whatever next fall holds for the Rockets.
Posted by PDiddie at Saturday, July 04, 2009