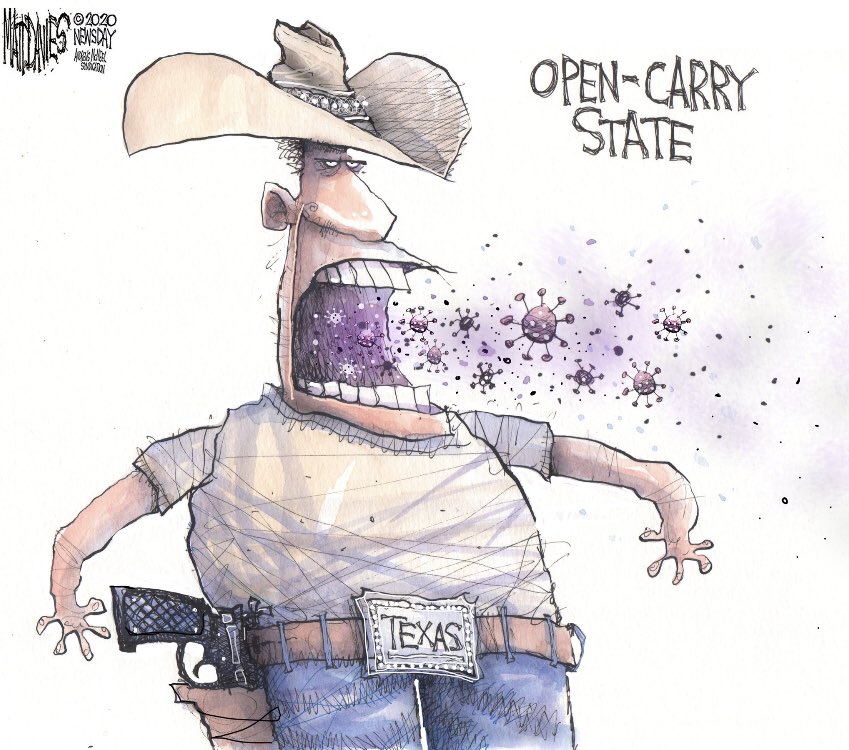 The Texas economy was one of the early victims of the coronavirus, as precautions like social distancing and staying close to home made it nearly impossible for many businesses to thrive. And in the interest of public health, a markets-oriented governor found himself stuck between fighting the spread of the coronavirus and keeping Texas businesses open to customers.

As the economy faltered, so did the underpinnings of the Texas state budget that depends on taxes and fees those businesses generate. The Legislature will return on the second Tuesday of January to figure out how to keep providing the services Texans want during a recession.

Ramsey links to several of his columns there. Every Texan (previously named the Center for Public Policy Priorities, Austin's liberal think tank) has posted its top five intiatives for the 87th Session.

The Lege has a hard road and difficult choices looming, and matters won't be eased by some of the worst Republicans (yes, we're all looking at you, Mayes Middleton) in the entire country.


Not just the electeds but those who elected them.

Texas is a hub of hyper-partisanship as American politics grow ever-more divisive via @BenjaminEW in @HoustonChron https://t.co/tb9G5z33Pq #txlege

What kind of people are willing and able to finance violent extremists like former Houston PD captain Mark Anthony Aguirre?

The kind who believe, probably correctly, that they will face no consequences for funding terrorism.

Young and ideologically aggressive, James Ho, Andrew Oldham, and Don Willett are already making their mark on the nation's most conservative appellate court.https://t.co/mn2zZHrn4K


Writing for the Houston Press, Jef Rouner talks to Dr. Peter Hotez about the coming anti-vaxxer backlash. Bud Kennedy for the FWST covers the GOP evangelical beat: they believe keeping Trump in the White House is a mission from God. (Cue up the Blues Brothers.) And Progrexas sees newly-elected GOP Rep. Beth Van Duyne as the anti-Squad leader.

You may ask yourself: "PDid, why is it that Texas Democrats cannot beat the worst Republicans in the nation?" That's a good question. Trust me: after 25 years of getting their asses kicked (pun intended), they still don't know why, either.

Texas Democrats got what they wished for in 2020. They still lost. https://t.co/TonLa0vo3j

Texas is set to gain three seats, and Republicans will likely try to expand their current 23R-13D edge to a 26R-13D edge - all while adding at least one new Hispanic majority seat and a new Dem seat in Austin. Here's how... pic.twitter.com/4I2nhANKd1


I'll have the post-mortem from the usual suspects on the SD30 special election result later in the week. Here's my environmental collation.

As the demand for clean, renewable energy is on the rise, the solar industry in Texas is booming— and so are anti-solar disinformation campaigns. https://t.co/OBLp07uaUA

Thursday was the first day of a long removal to teardown Shingle Mountain, a giant pile of toxic waste that's been located in southeast Dallas for nearly three years. https://t.co/gHQ0tlLCtn


This has been a goal of Downwinders at Risk for many years now, amd it's good to see it finally come to fruition. Coastal News Today republished the Chron op-ed written by Ken Adler and Elena Craft about the Port of Houston's self-defeating efforts to become an environmental advocate (dredging the Ship Channel in the manner they plan is crap).

The port is sponsoring a nearly $1 billion project to dredge the Ship Channel to make it easier and safer to navigate. But the project plans to use old, cheap dredges that will burn even more dirty diesel, dumping thousands of tons of extra toxic pollution on these families. How much pollution? It’s comparable to adding another refinery or power plant in their neighborhood — except that would have at least required an impact review and the best available pollution control technologies.

No one’s controlling this pollution. Tasked with protecting Texas’ air quality, the state environmental agency, the Texas Commission on Environmental Quality, approved the port-sponsored project. The U.S. Army Corps of Engineers, acting as the contractor, is weeks away from doing the same.

DeSmogBlog's Dana Drugman wrote about San Antonio's public utility company, CPS Energy, paying $250,000 a year for memberships in fossil fuel advocate organizations like the American Gas Association. And the Texas Signal published an op-ed by Madeleine Pelzel and Noah Hardaway of the Houston Democratic Socialists of America, and Marco Garcia of Sunrise Movement Houston, excoriating Cong. Lizzie Fletcher for sucking up to Big Oil during her first term. With the criminal and social justice updates:

Dallas Police Chief candidates all put emphasis on community policing in their online public forum last week. The Texas Supreme Court ruled that Alfred D. Brown must be compensated by the state after he spent nearly ten years on death row for a crime he did not commit. And HPOU head Joe Gamaldi suddenly resigned his position as head of the HPD union (go there for the background).

Let's close today with a few items to get in the holiday spirit.

SUPERHERO SURPRISE: Pediatric patients at The University of Texas MD Anderson Cancer Center in Houston got a surprise visit from Superman and Batman Thursday, when the superheroes rappelled off the hospital windows outside their rooms. pic.twitter.com/dnoICnIjeg


Here are 17 places for tamales around Houston..with photos so gorgeous I shed a tear. via @gregmorago https://t.co/tJLGSv4gEx