#Quarantine #Christmas
Got Rose Plant ~ Last night it looked Pink today the are Yellow
“Yellow rose of Texas“
May you have enough pic.twitter.com/GqKw6WeXOf


Ambling toward the end of a year that no one will look back upon with any fondness, I collected a few listicles to sort through; they appear close to the end of this post.  First let's catch up on the last election of 2020, and a vacant seat in the Texas state Senate that gets filled by a slightly less rabid Republican than the other one.

The rebel salon queen beat Governor Greg Abbott once, but on Saturday, he had the last laugh. https://t.co/W3WeYn0Lev

Shelley Luther became a conservative darling this spring for reopening her business in defiance of Texas emergency stay-home orders.

Meanwhile, hundreds were jailed in the Rio Grande Valley for violating orders, and their cases have largely gone ignored. https://t.co/tn6tsI367q


No Texan even moderately progressive gave one solid shit about this outcome, but had Luther prevailed, Greg Abbott would have been bloodied heading into his re-election campaign.  That might have energized Allen West and the rest of what comprises the "More Freak Right than You" caucus, and losing does nothing to soothe the savage beasts.  They will primary him regardless, and depending on how the various Lege skirmishes go, may feel stronger and more squirreley than ever in six months.  We'll be watching.

The Cornyn family brisket became a trending topic for a few days.

Like all Texans I too coat my charred Christmas beef lips in molten Twizzlers https://t.co/EPNogfAcBR

"Brisket is suing for defamation"

NBC Dallas pulled no punches in its coverage of @JohnCornyn's crimes against brisket. pic.twitter.com/XBC9VmEBYM


While John created the diversion, Ted secured a few million dollars in CARES Act funds for his friends, the Wilks brothers.

Texas billionaires and religious right funders got a $35 million pandemic relief loan for one of their fracking companies -- after Sen. Ted Cruz weighed in https://t.co/zIoCgOsYKw via @WSJ


Cornyn indicated that Abbott went to DC last week and asked Trump for more time to spend the remaining $2 billion left in the pandemic relief fund, saying without the slightest hint of irony that Texas would do so "hopefully in a more effective and reasonable way”.

It is to laugh.  Not to be outdone, Ken Paxton tried to make sure nobody knew that the reason he asked the Trump administration to claw back Harris County's federal COVID-19 relief funding was because he was afraid they might use the money to expand access to voting.

Paxton has been suing to try to overturn election results.

Paxton is under indictment for fraud and is facing abuse of power allegations.

Paxton asked the feds to take back aid $ to Texas. And kept it secret.https://t.co/Nkhfd3scuC


By contrast, all Dan Patrick managed in the week before Christmas was to ignore his peer in Pennsylvania, who wants him to pay off his $1 million promise about election fraud.  And outgoing statehouse Speaker Dennis Bonnen caps the worst year of his life (it's a long line, dude, and you're at the very end of it) by contracting COVID.

In the latest hypocritical effort by the governor to shrink the size of state government, Abbott wants to take over the Austin Police Department and give it to the TXDPS.  D Magazine says that the new Dallas police chief, Eddie Garcia, is not humbled.  Scott Henson at Grits for Breakfast blogged that limiting police pursuits would save lives ... but cops enjoy them too much for that to happen.  The outgoing El Paso DA, Jaime Esparza, wants to be the next federal prosecutor for the Western District of Texas.  A North Texas man who filmed his son's arrest -- for making a "wide right turn" -- by the Keller PD was beaten, maced, and arrested himself.

Cell phone providers are turning over private cellular data to law enforcement agencies that use Texas based ‘Hawk Analytics’ new surveillance tool to sift through data.

THREAD: Yesterday, Trump doled out a big Christmas basket of pardons and commutations. Among the recipients was ex-Congressman Steve Stockman, who got COVID in federal lockup. He was serving 10 yrs for 23 counts tied to illegal use of charity funds. https://t.co/pmbzoWeR4G


The Texas eviction moratorium was extended by the SCOTX.

The Texas Supreme Court has extended its emergency eviction relief program for tenants behind on rent through at least March 15, lengthening the program’s expiration date by a month and a half. https://t.co/woLwAyjCoP


For some reason this has not halted evictions in Harris County.

The CDC moratorium has stopped less than 10% of eviction cases in Houston since the order went into effect. https://t.co/5HFtQTXWmI

The moratorium appears to be working much better in Austin, however.

After a 3.5 hour hearing in Houston, federal judge Andrew Hanen did not rule on the @TXAG's office request to declare the #DACA program unlawful. The program has been in effect since 2012 and Texas, along with eight other states, filed suit to stop it in 2018.

Latino Decisions: TX-10, TX-21, and TX-24 are among 15 Congressional districts that an engaged and enthused Latin@ electorate should decide in 2022.

Environment Texas posts the top ten wins for the state's climate for the year.

Six of the seven most common qualifying conditions for medical cannabis are not covered under Texas' current Compassionate Use Program. https://t.co/9VQhhlQwDg

At the beginning of 2020, there were zero union papers in the Lone Star State. Soon, it seems, there will be three.https://t.co/4Oh6fALqVs

And ending today with these.

Over five decades of a career focused on "behavioral" politics and real-life elections, Richard Murray developed a reputation as an expert analyst and pollster.@chronsnyder looks back at that career as Murray retires from teaching: https://t.co/ZVvChihseG

In 1976, Texas A&M denied a group of gay and lesbian students the ability to form an on-campus student organization. The resulting court case, Gay Student Services v. Texas A&M, lasted the better part of a decade.

What a year, folks. To remember everything that’s happened, we’ve put together a compilation of Ben Sargent’s Loon Star State cartoons from 2020. https://t.co/cjeWG4I4VZ


Tom Hanks plays a Confederate Civil War veteran from San Antonio in the film News of the World, released on Christmas Day. 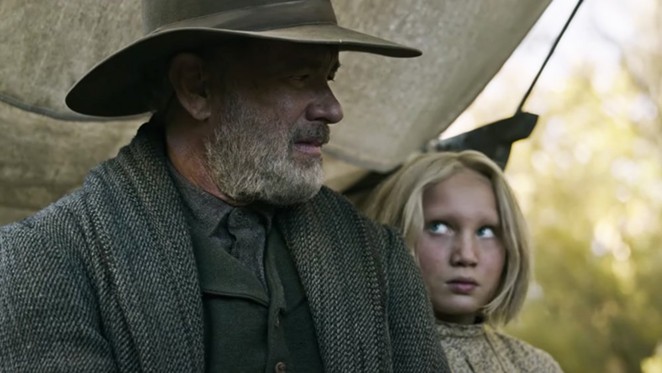 And there once was a Texas governor who claimed election fraud and refused to leave office. It happened 147 years ago (and no, it wasn't Ma Ferguson).