... in requesting membership in The Squad.


This is your expanded edition of the once-a-week roundup of the best of the left of, and about, our beloved Great State.  To the above, Bonddad gives a history lesson on how The Squad's members -- that's all of us, but especially the brave women pictured -- are direct ideological descendants of 1850s-era Congressional Republicans (if you saw the 2012 film Lincoln, which starred Tommy Lee Jones as Thaddeus Stevens, then you have some additional insight here).


Texas Southern University will host the third Democratic presidential candidates debate, scheduled for September 12 and 13, and broadcast by ABC News and Univision.

The two-part debate will be held at TSU’s Health & Physical Education arena, which has 7,200 seats ... The candidates and debate moderators have yet to be announced. To qualify, candidates must amass 130,000 unique donors and receive at least 2 percent support in four qualifying polls.

And former state senator and gubernatorial candidate Wendy Davis declared her challenge to Republican Chip Roy for the right to represent the 21st Congressional District.

The biggest prize in next year's elections will go to the political party that controls the state's House of Representatives, writes Ross Ramsey at the TexTrib. 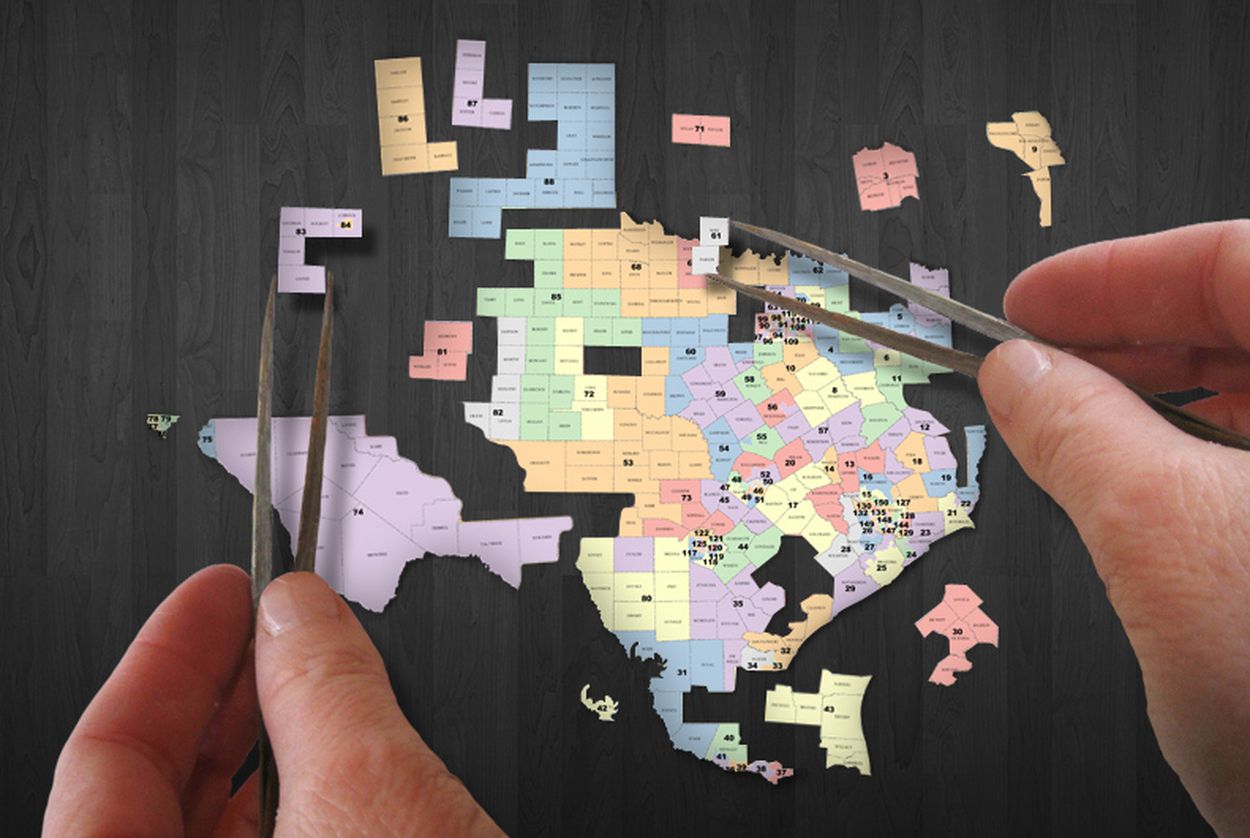 The idea animating many political candidates, consultants and donors in Texas in 2020 is one that’s way down the list of concerns for many Texas voters: redistricting.

The 150-member Texas House has 83 Republicans and 67 Democrats, creating a GOP majority that could flip to Democrats if the minority party could wrest away nine spots.

The legislators elected in 2020 will draw the next set of political maps for the state’s congressional and legislative seats. Right now, Republicans hold the governor’s office and majorities in both the state House and Senate -- a trifecta that virtually ensures the resulting maps will favor their party.

Winning a Democratic majority in the Texas House would give Democrats some leverage over at least some of the maps the state will use for the next decade of elections. Specifically, it could break the GOP’s control over the congressional maps that will be drawn after the 2020 census. At the very least, it would allow the Democrats to prevent Republicans from drawing those maps -- and to throw the political cartography to federal judges instead of Texas politicians.


More from Michael Li of the Brennan Center:

“There are 17 seats that Republicans won in 2018 by 10 points or less,” said Michael Li, senior redistricting counsel at New York University School of Law’s Brennan Center for Justice. “And that seems to be a lot of opportunity for Democrats, because the investment that would be needed to flip those seats is relatively small compared to the prize of being able to have a role in help drawing 39 congressional districts.”


Kuff reads the Chronicle's article on the millenials running for Houston city council, then pulls out a spreadsheet that reveals the Bayou City municipal electorate "tends to be pretty old" in order to justify the premise that these aren't the candidates the voters are looking for.  (Or something.  Frankly it all smacks of ageism.)  For more enlightened reading, see David Collins, who has some very good questions for council candidates.

The state's largest county will have new voting machines, very likely with a paper trail ... but not until the May 2021 primary elections, according to HPM.

Harris County is set to replace its antiquated voting machines, which are based on 20-year-old technology. But the work won’t be done in time for the 2020 presidential election. The new voting infrastructure will cost $74 million, with the funding coming out of the 2020 budget. Speaking at a trade show on Tuesday, County Clerk Diane Trautman said it will take until March just to narrow down the selection of voting machines to the top two vendors. She expects to pick the supplier by July of next year.

“Actually just to make 5,000 machines will take months,” Trautman said. “So to get them back, put them in the field, teach the election workers and the voters how to use them ... our estimate is the May 2021 election before they can be used.”


(Recent reports indicate that machines like the one pictured above are still not safe from hackers, and the company that manufactures them has a record of questionable business practices.  Brad Friedman, one of the nation's leading voices for paper ballots, would concur that the only safe ballot is one marked by hand and not by machine.  Clerk Trautman needs to be encouraged to carefully consider her purchase decision in this regard.)

And there remains some confusion about whether the state's hemp legalization law accidentally decriminalized marijuana.  Some county DAs are ending prosecution of petty weed crimes while others are not, and our tuff-on-crime governor weighs in on the question.

With the 50th anniversary celebration of the Apollo 11 moon mission this past week, Texas Standard speaks to a historian about LBJ's role in the effort. In 1957, a Soviet satellite wasn’t a cosmic curiosity; it was a real threat -- a nuclear threat. The public imagination was gripped by the idea that the Russians could bomb the United States from space. A few days after Sputnik launched, Johnson got a memo from an aide named George Reedy, urging the Senate majority leader to push for more aggressive space exploration. He saw an opportunity for good public policy -- and good politics. John Logsdon is professor emeritus at the Space Policy Institute at George Washington University.

“That was Reedy’s message, that this was something that’s a good thing to do. Plus, it will be attractive to the public and position you, as Reedy said, and make you president,” Logsdon says.

Johnson ran with Reedy’s idea. He came to believe that control of space meant control of the world. For the next decade, Johnson worked to make sure that Americans were those controllers.

“Would we be on the moon without Lyndon Johnson? I think the answer is no,” Logsdon says.


SocraticGadfly shows and describes why Texas arts aficionados who have any chance to see the late-life Monet exhibit at the Kimball need to go.

Elise Hu provides your Trader Joe's shopping list.  (I don't even know any rich people who shop at Trader Joe's.  Do you?)

And Pages of Victory uses Tom Englehardt's voice as a stand-in for himself.
Posted by PDiddie at Monday, July 22, 2019

$74 million to replace 5,000 voting machines computes to expenses of $14,800 per machine. If you consider the complexity using modern hardware and software engineering techniques to assure the security of those systems, that's not totally unreasonable. But I'm not confident we'll get the integrity and security that we need, instead of a half-baked effort with massive waste and unbelievable statements of assurance from officials. But a hand-countable paper trail of every vote will compensate for a multitude of sins.