The Texas Progressive Alliance waves adios to the Texas Legislature until January of 2021 (with any good luck).  Now our lawmakers watch, along with the rest of us, to see which of their hard-worked, hard-argued, hard-fought bills become law -- or not -- by the pen of Greg Abbott.


House honors newsman R.G. Ratcliffe on his retirement from Texas Monthly. Ratcliffe has covered Capitol since shortly after Battle of San Jacinto. Resolution passed unanimously, possibly because he's still working on 10 best/10 worst. Kudos to R.G. always one of the best. #txlege pic.twitter.com/d8yFqHE6Rn
— kherman (@kherman) May 26, 2019


The Texas Tribune, always with the most comprehensive coverage, has a photo gallery and a list of winners and losers from the 86th session.  The Dallas News' Texas Tracker aggregated their Lege reporting (which subscribers can customize to their interests).

Here's just a sampling of the latest from yesterday and the holiday weekend from those two sources:

Gunsense  and gun-nonsense bills made it through at the deadline.  Criminal justice reform advocates ran into one final roadblock in the Texas Senate, as a watered-down amendment was stripped out at the last minute.

After the fate of (House Bill 2754) was decided, state Rep. Joe Moody, D-El Paso, added a more limited version of the provision as an amendment to Senate Bill 815, which was a fairly uncontroversial bill relating to the preservation of criminal records. The House approved the bill, with Moody’s amendment about Class C misdemeanor arrests, in an 81 to 52 vote. But the Senate didn't approve the change, and Moody's amendment was taken out of the bill in a compromise report proposed by a group of lawmakers from both chambers.

Moody partly blamed the amendment's downfall on the Combined Law Enforcement Associations of Texas (CLEAT) -- one of the top police unions in the state -- who he said "stabbed me in the back and waged an outrageous campaign of outright lies and character assassination." He added that "pressure from the top down" in the Senate ultimately killed the bill.


Grits for Breakfast had the early analysis on this clusterf.

The most significant legislation of the session, the bill that reduces property taxes and adequately funds public schools, reached bipartisan consensus (and self-aggrandizement to the point of overkill).

Lawmakers also signed off on the state's two-year, $250-plus billion dollar budget.

The approved $250.7 billion, made up of state taxes and fees, local property tax dollars and federal funds, marks a 16% spending increase over the two-year budget approved by lawmakers in the tight-fisted 2017 legislative session. ... Facing a cautiously optimistic fiscal forecast, lawmakers expect to have an additional $10 billion or so to spend over the next two years, compared with the previous budget cycle. They agreed to allocate $6.5 billion in new state funding for schools and $5.1 billion to buy down Texans’ local property taxes, which state dollars supplement to pay for public education.


Pay raises for teachers -- not the $5000 across-the-board increase Dan Patrick had promised, though -- and a 13th pension check for retired teachers are included.

Texas Freedom Network made note of the fact that 2018's blue wave, and another one looming in 2020, made divisive legislation more difficult to pass.  Better Texas Blog enumerates five good bills that passed, five bad bills that failed, and five missed opportunities.  Environment Texas also scores the Lege's results as mixed.  Texas Vox blogged that lawmakers punted on taking any action with respect to the chemical fires Houston has recently suffered from.  And the Texas Observer's Candice Bernd wrote that despite efforts to soften the penalties for protesting against pipelines, the Lege passed the bill designating them as felony offenses.  (IANAL, but I would not expect these laws to withstand legal/judicial/constitutional muster.)

There was a raft of election law developments that was good news/bad news: SOS David Whitley caught all the blame for the ill-fated voter roll purge and went unconfirmed by the state Senate, thus forcing him to resign.  Many of the worst bills meant to intimidate voters were similarly defeated; SB9's failure was one of Progress Texas' best moments of the session.  But Houston Public Media reported that Harris County remains one of the most difficult places in the United States for people to both register and vote.

Several bloggers opined about the bill that enables the Texas Green Party to be on the 2020 ballot.  David Collins has been tracking its progress; it's now awaiting the governor's signature.  Socratic Gadfly also had some thoughts prior to passage.  Kuff's take is just as elitist as you would expect from a Democratic establishment suck-up, but at least it's not as whiny as it could have been.  And in other third party developments, Ballot Access News says that an Odessa Libertarian Party member has won a seat on the Ector County Hospital Board.

(Gadfly also looked at the latest woes of the Dallas Morning News.)

Stephen Young at the Dallas Observer has the news about CBD oil's legalized usage for certain medical conditions, but most experts agree that the Lege made the barest measurable expansion of cannabis decriminalization.

There's some 2019 and 2020 election news that Texas blogs and news sources had last week.  First: Joe Biden makes a campaign and fundraising appearance in Houston today.  He's running precisely as you'd expect the front-runner would.

His team says, "Because he simply doesn’t have to work as hard."

They seriously said this. Biden's focused on private fundraisers. He'd rather spend time with the 1% than 99%.https://t.co/uy7fb6SibJ
— The Bern Identity (@bern_identity) May 28, 2019


Hillary Clinton also spoke at the Harris County Democratic Party's Johnson Rayburn Richards luncheon last Friday, and in what must have created some awkward moments, it was revealed by Justin Miller at the Texas Observer that Tony Buzbee, a Houston mayoral challenger to Sylvester Turner who donated over $500,000 to two of Donald Trump's PACs in 2016, also gave the HCDP $5000 as a "White Pantsuit" sponsor for the JRR fundraiser.

Early voting begins today in most Texas jurisdictions with municipal runoff elections on June 8.  The Rivard Report highlights the nastiness of the mayoral runoff in San Antonio.  Mark Jones at Rice's Kinder Institute (Urban Edge blog) reminds us that there are less than six months until Houston holds its city elections.

Last weekend at Crystal Beach, a Jeep rally got so out of control that even the libertine, libertarian locals were terrified and appalled.  John Nova Lomax at Texas Monthly:

Nobody knows for sure how many Jeeps, lifted trucks, ATVs, side-by-sides, and four-by-fours descended on the Bolivar Peninsula - -a narrow spit of storm-wracked sand between Galveston and Port Arthur -- during last weekend’s chaos. One estimate pegged the number at no fewer than 40,000 vehicles, many with intoxicated drivers zigzagging beaches with no marked lanes or navigating a two-lane highway with lots of construction zones, often with up to a dozen people riding unsecured in the backs of pickups. 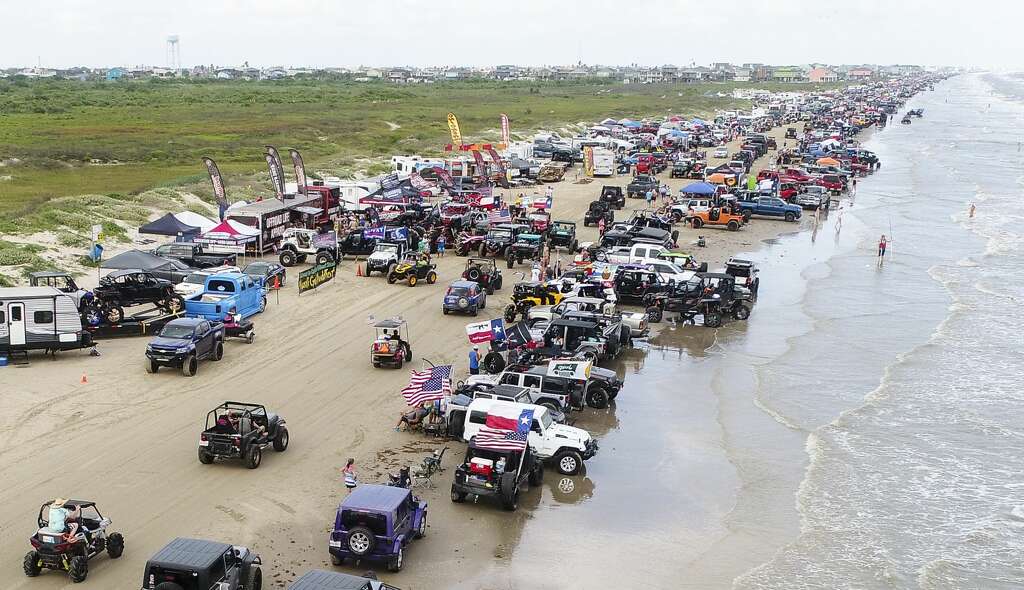 Galveston County authorities made at least 100 arrests (most for alcohol-related offenses) as Jeep enthusiasts converged for Go Topless Weekend, an annual car show and campout in Crystal Beach. Of eighteen wrecks in the area, eight were deemed serious. EMS dispatchers were barraged with more than 600 calls for service, and one of the accidents snarled traffic on Highway 87 -- the sole east-west thoroughfare and only way to drive on or off the peninsula --for about six hours. Videos of the weekend’s drunken brawls have been posted to YouTube. A young man emerged from a coma on Monday after his head was run over by a truck from which he’d fallen, and at least a half-dozen injured passengers were evacuated by helicopter to the UTMB hospital in Galveston.

Yet it’s far from just Jeep owners who are to blame for the mayhem. The event coincided with prom weekend for many schools in Deep East Texas, leading to the presence of hordes of young people arriving in jacked-up trucks and zipping around on dirt bikes and four-wheelers. Thanks to a swirl of teenage hormones, copious amounts of alcohol, and the revving of high-powered engines, fights inevitably broke out, and some young women took the event’s invitation to Go Topless literally. The Texas Patriot Network’s MAGA Beach Bash was also taking place nearby, near the town of Port Bolivar, adding to the crowds on the peninsula. On top of it all, a whim of Mother Nature—an abnormally high “bull tide”—forced all this humanity into a narrower and narrower slice of drunken, thrown-together life, hemmed in by saltwater on one side and dunes on the other.

DSA members from Houston, Austin, and DFW showed up today at the picket line in solidarty with USW Local 13-1.

A DOW subsidiary has locked out over 200 workers. Rather than bargaining, bosses decided to starve out workers and their families instead than paying a prevailing wage. pic.twitter.com/qVClt6Te3V
— Houston DSA (@HoustonDSA) May 27, 2019


Finally, Pages of Victory has some voting advice for progressives, while Harry Hamid contemplates his reality.
Posted by PDiddie at Tuesday, May 28, 2019