The Texas Progressive Alliance is grateful not to have to wrangle any actual turkeys for its holiday meal in this weather.  Wrangling these blog posts and news items -- not all of which are turkeys -- is difficult enough. 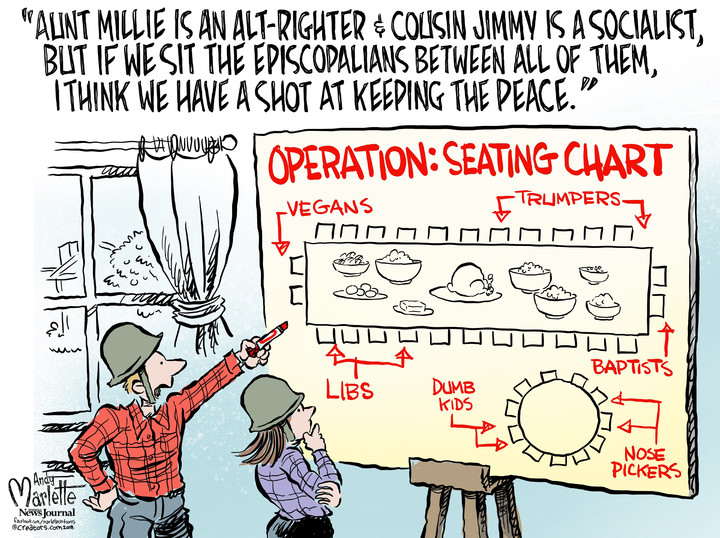 Off the Kuff looked at the results of the Congressional races to find some themes about what happened and what we can learn from them.

David Collins also did some Congressional Kuffnering, along with a TX-23 follow-up, and wants you to know that he is down with the MPP (which is not the Marijuana Policy Project).

Progrexas blogs that Texas Republicans and Democrats who barely won their Congressional and Lege contests in 2018 will be the top targets for their opposition in 2020.

Better Texas Blog explains the spending cap that the Legislature adheres to.

Houston Justice, reporting from the NAACP Houston chapter's elections, saw the Old Guard prevail over the Young Turks (in the vernacular), a story the Chron and KPRC also had.

Bud Kennedy at the Fort Worth Star-Telegram noticed pastor Ed Young of Houston's Second Baptist Church (also losing CD-7 incumbent John Culberson's church) being so upset about Democratic gains in the wake of the midterms that he condemned the victors as "godless", a passing of judgment echoed by other so-called Christian leaders.

About one-fourth of Texas voters this month were white evangelical Christians. According to CNN’s exit poll, Republican U.S. Sen. Ted Cruz, a faith-and-values Southern Baptist from Houston, won 81 percent of that vote.


The Catholic Diocese of Brownsville is taking the the Trump administration to court over the location of the proposed southern border wall passing through the historic La Lomita mission site.

Houston Legal has the details of the public reprimand issued by the State Bar of Texas against former Harris County GOP chairman/homophobe Jared Woodfill.

Nonsequiteuse urges Beto O'Rourke to take another run for the Senate in 2020.

Four Texas Libertarian candidates broke records for the number of votes received in the 2018 election, writes the Independent Political Report.

Downwinders at Risk blogs about San Antonio and Houston moving forward with new regional air monitoring networks, while Dallas does not.

TPA charter member Sharon Wilson, now the Texas coordinator for Earthworks, is still fighting the good fight against fracking in the Permian Basin.

Wilson, an outspoken anti-fracking activist, has advocated for better regulations to rein in the fracking industry, which utilizes horizontal drilling and fluid injections to crack open shale to release oil and gas trapped inside. But she no longer believes regulations are the answer because state and federal governments aren’t prepared to enforce them. “The only way to save the planet from climate change is to stop fracking now.”


Socratic Gadfly remembers the centenary of the 11th hour of the 11th day of the 11th month.  Along with indulging in counterfactual history, he says people should stop romancing war in general.

Paradise in Hell tells you more than you cared to know about Trumpy Bear.

Dan Solomon at Texas Monthly is happy that Austin did not get Amazon's HQ2.

Harry Hamid's brother cut his first record album.  And Travis Scott's 'Astroworld' music festival defied the trend, collecting a huge and enthusiastic crowd despite uncooperative weather.  The rap celebration of the long-gone-but-warmly-remembered theme park capped a breakout year for Scott, who made his star shine in 2018 as much as did Beto O'Rourke.


one of the best nights ever. 🤘🏽#ASTROWORLD pic.twitter.com/1gDNItZmTp
— ana (@anathemartinez) November 19, 2018