Beto O'Rourke: a cult of personality

He's morphed from an upstart longshot right into a presidential wet dream for swooning Donkeys in the span of a couple of weeks. 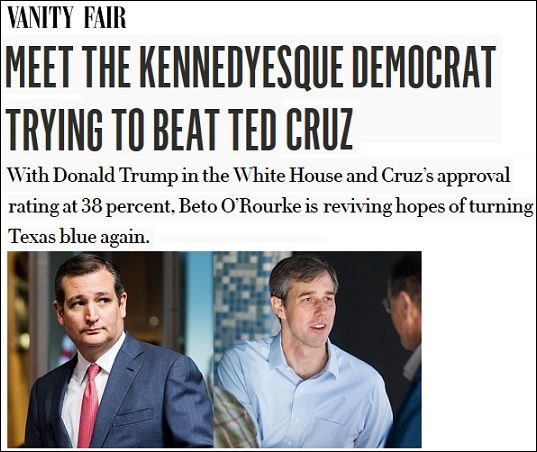 
When Jon Tilove at the Austin Statesman featured 'Beto 2020' in his column/First Reading blog last week, I rolled my eyes.


That was the first I had read about this (like I've said before, I quit Facebook weeks ago; I'm no longer privy to the hive mind of Democratic activists ... and feel much healthier as a result).  Tilove, who normally has something valuable to contribute to the political discussion, had gone off the rails with this prognosticating.  Or so I thought.

On Monday, I led the Wrangle with my premise about a brightening forecast for O'Rourke's chances against Poop Cruz.  Then Beto's remarks about NFL players taking a knee, video posted by Real News (over 15,000 views and 28,000 reTweets), blew up the Internet.  Then the latest poll broke, from NBC News/Marist, showing a scant four-point lead for the Zodiac Killer.

That poll -- look at Kuffner! On it! And look who his first commenter is! -- does not reflect the impact of the viral 'kneeling' video or his recent teevee ad buy, as RG Ratcliffe at Texas Monthly pointed out yesterday.  (And still no mention of the one poll that had Beto just a nose ahead.  Very odd.)

So then I start seeing all kinds of fawning comments and Tweets about Beto, from locals to statewides to "Hollywood liberals" (as Rafael puts it) to the chattering political consultant class, all dreamily fantasizing not about Senator O'Rourke ... but President -- or Vice President -- O'Rourke.  Just as Tilove above speculated.


The next superstar in the Democratic Party is @BetoORourke. I predict he’ll defeat Ted Cruz this November and be the keynote speaker at the Democratic National Convention in 2020. And he’s not just what our party’s been looking for, he’s what America desperately needs.
— Ken Olin (@kenolin1) August 23, 2018

It's a shame nobody read the Texas Monthly piece I excerpted in this January post (the original at TM is currently offline) that enlightened me about O'Rourke, and led me to the conclusion that I could not ever vote for him.  It's also a shame no journalist has thought to probe a little deeper -- here on the first anniversary of Hurricane Harvey -- about why he was one of four Texas Democrats who voted against tax relief for victims of the storm.  His answer to this point has been his usual superficial BS.

But the real burning question for me is: how does Julian Castro feel about being Pipped by Beto?

Beyond that, the TexTrib via Progrexas sees the 'kneeling' comments on the video as maybe not helping Beto too much here in Deep In the Hearta.  They may, sadly, be right about that.
Posted by PDiddie at Friday, August 24, 2018

Oh, I read Tilove a couple of days ago and threw up in my mouth.

Several otherwise level-headed progressive friends of mine are completely in the grip of Betomania. What they all have in common is that they have been to an O'Rourke campaign event and heard him speak in person. Is he that good, or are folks just that desperate for the Next Blue Thing? It makes me wonder whether I would be as susceptible to his charm offensive if I saw him live.

I don't know—nor do I have the heart to ask—how these friends feel about O'Rourke's less-than-progressive voting record, or his unwillingness to say, "Yes, dammit, Medicare for All ASAP!"

To paraphrase MJF from "The American President", Texas Democrats are so thirsty for a winner that "they'll crawl through the desert to a mirage, and finding no water there, will drink the sand".

O'Rourke is a fraud, a mirage. But nobody who is a dedicated Donkey wants to know. The media -- with the notable exceptions linked from Texas Monthly -- isn't asking. They just take what he says at face value without verification.

I wanted to better understand why he kept voting for more money for wars, so I kept researching until I finally realized that Fort Bliss is in his Congressional district. Read that Wiki page for just five minutes, and you'll suddenly realize why this country will NEVER stop funding wars.

It's a perpetual economic stimulus program.

"Military Keynesianism" is the term, I believe. Bernie and his F-35s lust.

Oh, dunno if either of you saw what I posted on Twitter, but Alyson Kennedy is not an actual write-in candidate, per the SOS. Dunno what she did wrong, if the Socialist Workers Party story was indicating she had actually filed the write-in paperwork, but she ain't a candidate.

Oh, note for David: In my day job, I've interviewed him. He does have a fair charisma level. And, while not Bobby Kennedy, he's not bad as a speaker to middle-sized crowd.

He does speak around the words "single-payer" or "Medicare for all." Per Brains' link to me, he used the phrase "universal health care," IIRC, while in the Springs in the primary season.

The enthusiasm is real, though, as I note as part of my op-ed column this week about Batman and Robin playing debate chicken.

Funny how the other side is always 'fawning' or some such thing. It's easy enough to shift those descriptions around to taste.