(Part two of The Revolution as opposed to The Resistance.  Part one is here.)

Once more we find a corporate media blackout on the most progressive candidate in a statewide contest.  To paraphrase Sarah Silverman: frankly, it's ridiculous.

Sema Hernandez is told she is the first Texas Latina ever to qualify for the ballot for US Senate.  She has an enthusiastic Twitter following that was instrumental in raising the funding necessary to get her on the ticket.  Her story is powerful.  And yet ... if all you did was watch teevee or read the newspapers, you might believe that there was just one person standing up to challenge Lyin' Ted Cruz in November.  (There are three, but the third one is a ghost.  Only this site has the slightest bio of him, an 'ex-pressroom manager'.)

Exhuming the lede: the more I have researched Bob O'Rourke, the less likely I am to be voting for him.  Today I'm including the general election in that assessment.  There's much time and many opportunities for improvement on his part should he emerge as the nominee, and lots of unexpected things can happen.  But if November 6, 2018, was tomorrow, and the options were Cruz, O'Rourke, and a bunch of nobodies on the extreme right ... I would undervote the US Senate race here in our beloved Texas, and here is why.

-- There is no Green candidate running, or attempting to qualify to run, by all indications.

-- The gaggle of Libertarians dueling for that party's nomination are, to be kind, completely insufficient candidates, and the independents declared with even so much as the slightest profile -- Dale Bible of the Constitution Party, Bob McNeil of the American Citizens Party --  are far to the right of the GOP and the Libs.  This research was comedic relief: finding Texans who think Cruz is too liberal helped clear my lungs of a small bucket of phlegm, screaming and coughing in laughter.

-- It shouldn't have to be mentioned, but Cruz or any of the four Republicans who might upset him in their primary are non-starters.  I only wonder if disgraced prince of darkness Steve Bannon's support of Cruz helps or hurts the incumbent at some point.  Texans Republicans are both forgiving of all sins and massively hypocritical when they can manage to acknowledge them, so there's probably nothing for the lazy corporate media to find even if they looked.  If televangelist Bruce Jacobson is to gain any traction, he would be wise to go after Cruz's porn Tweets, the Bannon free pass, and anything else that can leverage Trump's MAGATs against the senator.  It's quite possible that Cruz has to go to a runoff, and that helps the Democrats.  So does so many freak right-wing others in the general.

So then ... can Sema run strong enough in south Texas, among other places, to push O'Rourke into a runoff?  If Edward Kimbrough, whatever and whoever he is, can collect some vote share above 1 or 2%, then the chances increase.  That's her best bet today. 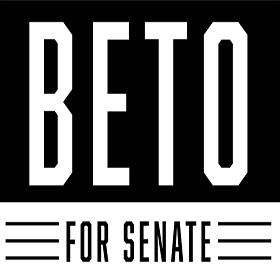 For starters, he comes from a excessively privileged background, and it's been my experience that people like him don't have a lot of genuine empathy for the less-than-fortunate.  His parents were well-off and well-connected; he attended an all-male boarding school, went to Columbia University (was on the rowing team), drifted somewhat aimlessly and in bohemian fashion for several years after graduation.  He would rather you think of him as the punk rocker who got busted twice in the '90's, once on a forcible entry charge at UT and also for DWI.  Both charges were dismissed -- lucky him -- but he apparently earns 'street cred' from the repeated mentions of his criminal record.

What he really doesn't want you to know is that he has a long reputation as a phony.  This excerpt from Texas Monthly has details about his El Paso real estate fronting for his father-in-law.

In 2006, (city councilman O'Rourke's group of politicos cynically named the Progressives) championed a public-private redevelopment that would welcome a sports arena, hotels, big-box retailers, and an arts walk to downtown and southside El Paso. O’Rourke saw the plan as a way to “bring life and energy and vitality” to an area of the city that had long been characterized by abandoned buildings and shuttered stores. But entrenched property owners believed the plans represented an existential threat to their businesses; Chicano activists saw an aggressive gentrification that would “de-Mexicanize” the historic Segundo Barrio neighborhood, some of which was slated to be razed and rebuilt; and soon both groups mounted an offensive against the council members, accusing them of doing the bidding of a cabal of billionaire developers. O’Rourke responded by attending forums hosted by the business owners and walking door-to-door in the Segundo Barrio neighborhood to hear residents’ concerns—he found that most of them supported some kind of redevelopment—but the battle lines had already been drawn, and his opponents saw his listening tour as a cynical act.

“He was the young Kennedy progressive going to slums, offering a better perspective,” David Romo, a historian and activist who fought against the plan, told me. “That was the narrative that he was very good at promoting, but it was all false, it was all a mask. He made himself the absolute good guy and everyone who was fighting against displacement was the bad guy.”

That May, another El Paso activist initiated a recall campaign against O’Rourke. When the recall fizzled, the downtown property owners filed two ethics complaints against him, citing conflicts of interest because his father-in-law, prominent real estate investor William Sanders, was one of the key businessmen behind the plan. After an independent ethics-review commission dismissed the charges against him, O’Rourke denounced what he saw as a coordinated campaign of “character assassination and political intimidation.”

To this day, the fight produces strong reactions. Romo refuses to call O’Rourke Beto, because he sees the name as an act of cultural appropriation by “someone who betrayed our trust.”

Watch this video of the Segundo Barrio residents and activists confronting O'Rourke about the project.  Read this extensively researched blog post from 2012 at Deep Inside El Paso regarding the pattern of displacement of minority communities for 'economic revitalization' demonstrated by real estate developer and O'Rourke's FIL, Sanders.  Note that as an El Paso city council member. O'Rourke recused himself from many votes on real estate projects in the city ... but not Segundo Barrio.  Even when former mayor John Cook suggested that he do so.

And if you like your snark wicked, read this send-up of 'Beto 4.0'.  Excerpt:

“This is pretty alarming,” says CNET analyst Amado D. Kompuradoras. “The Betobot has had a series of problems since its initial outing as Robert O'Rourke.1.0. At that time, that version was sufficiently Republican until you got the BetoBot released in Version 3.0, name change and all, now a Democrat.”

Learning all this gave me a greater understanding for the Congressman's duplicity -- there's no other word for it -- on single payer.  He declares that healthcare is a human right, but it's a right he expects everybody to have to pay for, and that hospitals have a right to profit off of.

O’Rourke supports universal coverage and sees a single-payer approach as the “only clear path” to get there. He’s not signed on to the House bill (HR 676, 'Medicare For All', the Conyers bill), even though he likes its goal, because he disagrees with the requirement that providers be public institutions or nonprofits. “If you like the way Medicare works today, I don’t know why you wouldn’t use the same model in what is being called a Medicare for All bill. Instead, Conyer’s bill changes that model fundamentally, takes a big chunk of potential providers out of the mix and starts out with some entrenched opposition,” O’Rourke told the Observer. “I think we can do better.”

O’Rourke likes what he’s read of Sanders’ bill, but disagrees with having no copays for anyone and no premiums for low-income families — he’d prefer everyone pay in to some extent.

That's the equivalent of favoring a poll tax for the right to vote.  Which is bullshit, Bob.

The prevaricating doesn't end there; PolitiFact caught him in a half-truth regarding his piousness about "not taking PAC money".  It's long, and complicated by the usual hurdles in tracing political contributions, so here's the nut graf.

O’Rourke said: "I’m one of two members of Congress out of 535 that takes no corporate cash, no political action committee money."

Unsaid: no candidate can take corporate cash; that’s illegal. Otherwise, we found, O’Rourke was one of at least five (not two) House incumbents to keep no PAC contributions in the run-up to the 2016 elections. He also hasn’t accepted PAC aid into 2017 though he drew on about $297,000 in PAC donations in his House bids of 2012 and 2014 -- actions not recapped in his Dallas call for contributions.

I think "half-true" was generous.

In the past week, one thing O'Rourke did that he had to quickly backtrack on was his call for a mandatory national service program for millennials.  Because, as blogged above, he did so much in his own youth to serve his country.

Stace and Wayne were both quick to make excuses for him.

All this is forcing me to take a hard pass on Bob.  By sharp contrast, Sema is from the Democratic Socialist wing of the Democratic Party, she's for Medicare for All without conditions, also tuition-free college, the good kind of comprehensive immigration reform (she's the daughter of immigrants), a $15 minimum wage transitioning to a universal basic income, and a whole lot more that I find genuine and direct, not to mention meeting the definition of 'real progressive'.

So you vote your principles in the primary and I'll vote mine.  Don't expect me to vote for your neoliberal shitholes in November if you wouldn't vote for a Democratic Socialist now, or then.  There's gonna be a Revolution inside the Democratic Party sooner than later; I'm voting for now.

If you're in the Houston area, you can meet Sema next Friday.  The following day is the 2018 Women's March in Houston (last year more than 20,000 participated) and Sema will host a meet-and greet prior to it.  She'll also have a community town hall at U of H on February 7.  If you're elsewhere in Texas, she's raising funds for a state tour right now.

She is as solid as a progressive populist can be.
Posted by PDiddie at Saturday, January 13, 2018