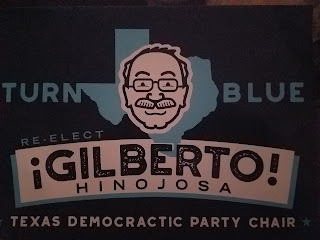 The slick 4-page magazine-style mailer, front pictured above, that I received earlier this week indicates how seriously El Patron is taking his re-election campaign.

Inside, among other horn-tooting, is a list of accomplishments Hinojosa claims as his but were actually worked by Cliff Walker (more here) who stopped following me on Twitter after I stopped Tweeting about the Green Party and became a critic of the Texas Democrats.  Previous mentions in this space of Walker, including the following excerpt from this post from last July.

Maybe Cliff Walker can find Betsy Johnson, clean off her combat boots, and keep the Greens from getting to 5% again.  (The GP already has to petition for ballot access next year, thanks to the two afore-mentioned in 2016.)


So Walker's done his job, and maybe Hinojosa should be rewarded for hiring the guy who got the Greens knocked off the ballot.  That's what good managers do, right?  Hire good people?

Or maybe it's a feather in his cap that the state party's staffing and the fundraising to pay them is in tip-top shape.  If that's true (it's not easy to find a financial disclosure for the party online, and they aren't current and don't reveal much, but there will be a treasurer's report delivered this afternoon at the SDEC meeting) then maybe things look better for the TDP than they do for the statewide slate of candidates, who are suffering badly from too little green, especially when compared to their TXGOP rivals and unlike Democratic Washington DC hopefuls like Beto O'Rourke and your respective D running for the US House of Representatives (about which much has already been blogged and written).  The TexDems appear to still be searching for a coordinated campaign fundraising director, and back in December refused to return the cash raised at an Al Franken money haul.

But this is mostly old news; maybe their coffers have filled a bit since the runoffs gave us the November ballot a month ago.

For his part, Hinojosa raised or loaned himself $4k and spent about half of it in the period from January to May of this year; I suspect his recent mailer cost a lot more than that, so we'll have to wait to see how he did over the last 30 days once his most formidable challenger, Mayor Cedric Davis, was identified.

I should point out that perennial state chair candidates Rachel Barrios-Van Os and Fidel Acevedo ought to only be in this race to split the Latinx vote in order for Davis to get to a runoff with El Patron.  They are unserious and unqualified for the job, and I think most delegates know this by now.  Four years ago (and also six), when I blogged this race -- and its outcome and some post-convention thoughts also -- and Texas Observer founder Ronnie Duggar endorsed her, I thought perhaps there might be a chance for some progressive change.

I also had a much higher opinion of the Van Oses than I do today.  Today I find them to be the most masochistic people I have ever met in politics.  They never seem to get enough of the ridicule, rejection. and abuse from the Donkeys and keep going back for more.  If her husband had allowed himself to go Green a few years ago after the first or second rebuke -- more importantly, if she had allowed him to -- the state of progressive politics in Texas would look a lot different today.  Ifs and buts, candy and nuts.

Vote for Cedric Davis, delegates.  More Tweeting about the TDP convention at the top right column over the weekend.

Update: I should have also pointed out that Sen. Borris Miles hosted a breakfast for SD-13 delegates two weeks ago at which Hinojosa made an appearance, so both men have been busy shoring up El Patron's credibility with the African American caucus.  I'm following the Texas Black Dems Twitter feed to see if -- and who -- they endorse; that'll be the key.  At this point (early Friday morning, 6/22) they haven't recommended any of the three black women running for vice chair.

Per your link back to last year .... Lupe wasn't even on the radar then.

A year ago, the Castro twins had already removed themselves from speculation. Harold Cook was talking up Annise Parker.

There was some group of "insiders" trying to get Wendy Davis to re-run. And Gilberto F'n Hinojosa (LMAO).