The Texas Progressive Alliance urges you to exercise your freedom of electoral expression in ongoing special elections, and in the upcoming primary runoffs.

Here's last week's lefty blog and news roundup from around the state!

In lieu of any scheduled debates between Democratic gubernatorial sacrificial lambs competitors Andrew White and Lupe Valdez, some candidate fora happened during the past week where both were questioned about their campaigns and plans for the state.  At the Jolt Texas (Latin@ youth) convention in Austin, that organization endorsed White after Valdez "came across as ill-prepared or -informed", according to Patrick Svitek at the Texas Tribune, in explaining her record with ICE as Dallas County sheriff.  White and US Senate hopeful Beto O'Rourke came in for some tough questioning as well.  (Good on the Jolt Texans for doing the job that our state's corporate media -- taking too many campaign advertising dollars, or perhaps simply lacking the will -- can't get done.) 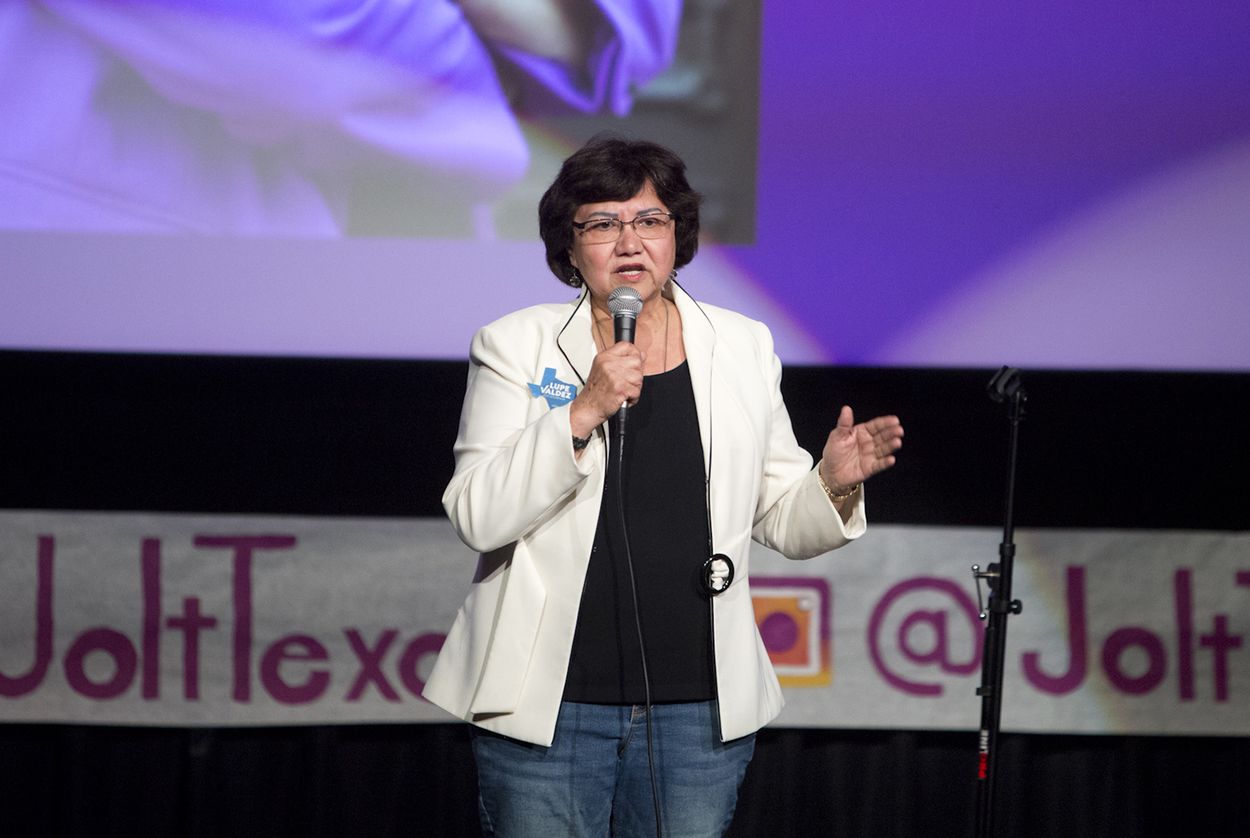 Neil at All People Have Value posted a picture of the violence initiated by HISD board president Rhonda Skillern-Jones against lawful and peaceful citizens advocating for Houston school children at a recent meeting, and Durrel Douglas at Houston Justice reported on the outcome of that meeting: the minority schools in question will not be loaned out for privatization.  And Stace at Dos Centavos saw the tactics employed by the board to silence dissent as the same old, same old.

In yet another example of the DCCC doing its best to purge progressives and support the most conservative of Democrats in contested races across the country, Lee Fang at  the Intercept talks to a CO-6 candidate who taped Steny Hoyer's obnoxious and condescending talk with him about not just exiting his race, but to hush up saying mean things about his corporate lawyer opponent.  (Shades of TX-7,  and TX-32, and other runoffs in Texas, as we know.)  Likewise, Amy Bolguhn at Rewire notes the DCCC supporting a New York Congressional candidate with poorly-reasoned views on reproductive choice.

With a searing and spot-on diagnosis of our ailing one-party-with two-sides political system, David Collins wonders if Medicare for All will cover post-Democratic Party rehab.

The Contributor links to the list of mayors of more than a hundred US cities -- including San Antonio's Ron Nirenberg, Austin's Steve Adler, San Angelo's Brenda Gunter, and Shelley Brophy of Nacogdoches, but NOT Sylvester Turner of Houston or Mike Rawlings of Dallas -- who support defending the open Internet as the deadline for repealing net neutrality approaches.

Speaking of Dallas, that city is simply not ready yet to remove its Confederate statuary.  Morgan O'Hanlon at the Texas Observer says that the city council has deemed the effort too expensive ... but wants to add a memorial to a victim of lynching instead.

Grits for Breakfast suggests there's a lesson to be learned for Texas legislators in a ruling of unconstitutionality of a revenge-porn statute by the Tyler-based 12th Court of Appeals.

Off the Kuff is all about the redistricting arguments at the Supreme Court.

SocraticGadfly offers up a profile of gadfly lawyer Ty Clevenger.

Elliott Morris at The Crosstab interprets the most recent Congressional special election results.

Sanford Nowlin at the San Antonio Current has some fun with Trump campaign manager Brad Parscale's rants about the Alamo City bidding for the 2020 GOP convention.

Texas Living Waters Project wonders if reservoirs are an outdated approach to meeting the state's water needs, just as the Texas Standard reports that a majority of the Lone Star State has slipped into drought status.

In examining the recent and unanimous vote to allow a homebuilder to begin construction in one of the Bayou City's floodplains, Chelsea Thomas at Free Press Houston reveals the hypocrisy downtown on Bagby.

Earlier this week, Houston’s City Council unanimously voted to give Arizona-based real estate developer Meritage Homes and Houston-based land developer MetroNational the ability to create a Municipal Utility District for a proposed development deep in North Houston’s most-recently ravaged floodplain. Why? Because Harvey apparently taught us nothing, politicians are afraid of losing development dollars, and Houston is a flat, bleak expanse that only beige sprawl-burbia will improve.

The worst part about this whole thing? It was sort of unavoidable. Disapprove and the developers build even more recklessly, approve and it’s reckless anyway. It’s an example of floodplain catch twenty-two. We disapprove, and previously-inundated homes are destroyed once again. Approve, and it’s a subtle dog-whistle to corporate developers Houston’s still a zone-less free-for-all and will allow your McMansion bullshit as long as you keep money in the coffers.

And Harry Hamid took a field trip with Blind Father Tom underground; underneath the seminary.
Posted by PDiddie at Monday, April 30, 2018

Oooh, "searing"! I'm blushing. Thank you for that.

"Houston’s still a zone-less free-for-all" My Attorney friend is trying to move there to branch out his business. He says the housing was crazy to look at. He is far from super-wealthy but the homes can be ultra nuts if you have deep enough pockets. We just moved into a new home
across the country and are just happy as can be in nice communities. We can't wrap our heads around the massive mansion lifestyle/ gated communities anyhow.