The Texas Progressive Alliance is packing some extra antihistamines in addition to bringing you the best of the left of Texas from last week.

US Senate candidates Beto O'Rourke and Sema Hernandez met for the first time in the wake of the Democratic primary almost a month ago, and Geoff Campbell interviewed Hernandez afterwards for Progressive Army.  The face-to-face seemed more than a little stand-offish, but O'Rourke appears to have won Hernandez's vote -- if not her endorsement -- in the 2018 general election.  Video courtesy Holos Media on Twitter.


Socratic Gadfly has an update to a previous post on what clearly appears to be a weird triangle in Marlin between Houston real estate "flippers," a former VA hospital building, and the General Land Office and P. Bush.

Ethan Couch -- he was the Brains and Eggs' 2015 Texan of the Year for being responsible (a thinly relative term when referring to Couch) for the word 'affluenza' -- is leaving jail this morning and beginning his ten-year-probationary sentence.  Stephen Young at the Dallas Observer has the details.  Also blogged here a couple of weeks before Couch's award: a disease associated with affluenza is ... gulliblemia.

Talking Points Memo checks in from the federal courthouse in Houston with a report on Steve Stockman's fraud trial, and seems astounded that everything is bigger in Texas, doubly so when it's crimes committed by Texas Republicans.  (Meanwhile, Texans thought everyone knew this already.)

The Texas Standard speaks to the Dallas News' Lauren McGaughey (paywall) about the state's Sunset Advisory Commission describing mental health care oversight among the three agencies charged with that task as being in "severe operational dysfunction".

Scott Henson at Grits for Breakfast tips Texas reporters to some news that just might have a Pulitzer hiding in it somewhere.

In the New York Times last week (March 29), former Austin Statesman editor Richard Oppell authored an article that could resonate throughout Texas indigent defense systems, as it describes a practice that's widespread, not remotely limited to the judge or attorney in Galveston at the center of the story. Here's the heart of the allegations ...

Grits has heard similar stories from defense attorneys for as long as I've paid attention to the Texas justice system, including attorneys stiffed not just for time worked but also for investigators' fees or even forensic services.

Which brings me to this observation for Texas-based reporters: This is a national story which can be localized. This isn't the only Texas jurisdiction, by any stretch, in which judges reduced pay requests from lawyers as excessive when they tried to put on a zealous defense. There are also stories out there of lawyers losing out on appointments because judges considered them a tad too zealous. Attorneys who make a living representing indigent clients must routinely take on caseloads well beyond bar-association-recommended guidelines in order to pay for a mortgage, middle-class lifestyle, and law-school debts. This story explains why, and it's not just happening in Galveston.

So, for my reporter friends on the local courthouse beat: There's a courthouse paper trail on cases where judges reduce attorneys' fees, which a local attorney who takes indigent cases or the court coordinator can help you identify. Then, one simply calls up the attorneys to ask why they requested the additional pay. Follow up with calls to the judges in question to get their side of the story; the county judge so s/he can lodge a complaint about unfunded mandates from the state; then make a call to indigent defense experts like the Texas Fair Defense Project or Civil Rights Corps (the two nonprofits that sued over Harris County's unconstitutional bail practices), and you've just localized a national story.


The Lewisville Texan Journal took note of a local election where residents were asked to support or oppose giving themselves a $100 check ... but nobody bothered to vote.  Really; 0% turnout.

Voting ended Saturday for a city referendum, which would cut a $100 check for each resident of Lewisville due to a budgeting error at City Hall. Not one person voted in the election though, causing a standstill among city officials.

“If I’m being honest, we don’t really know what to do,” City Manager Donna Barron said. “We don’t have anything in the city charter to address something like this.”


A Fort Bend county commissioner wants the Lege to consider exempting the Texas Open Meetings Act for emergencies, but Christopher Collins at the Texas Observer asks if that's just another excuse to kill laws that force government to conduct itself transparently.

Houston Justice wants to see more African American representation on the Bayou City's commissions and boards, and blogs about how action on that might look.

The Rag Blog's Alice Embree writes about a Chilean student who presented a paper in Paris about protests against Salvador Allende in the '60's and '70's, and used the Austin underground newspaper's digital archives for research. 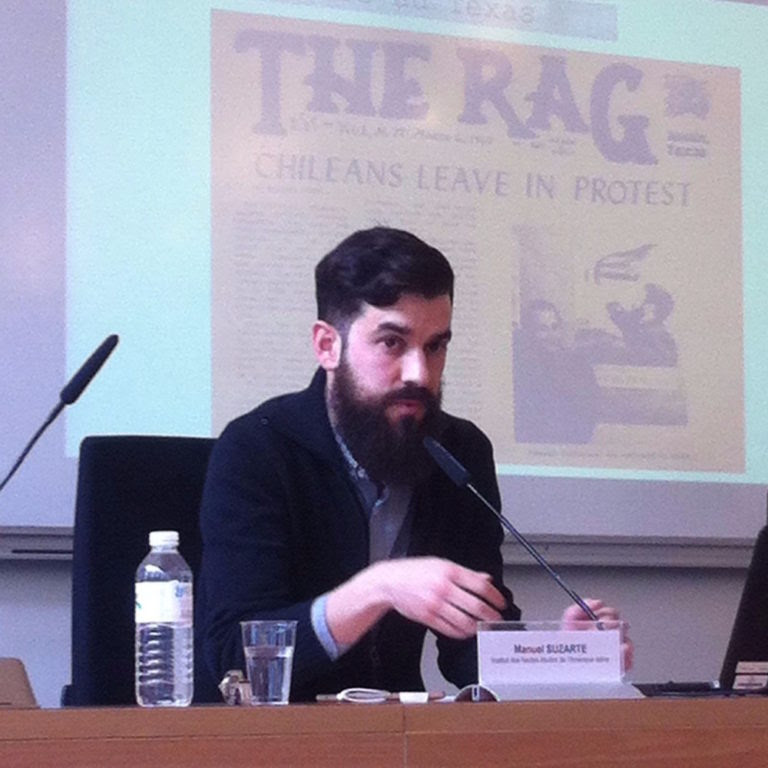 Another poll bar-graphed by Ted at jobsanger leaves him puzzled as to the conservative political leanings of the Baby Boomer generation.

And both Houston Public Media and Texas Leftist covered the Bean Art War that erupted into a series of putdowns, crackbacks, and other sick burns between Chi-Town and H-Town.  (Few seemed to notice that the artist considers them 'clouds' and not beans.)
Posted by PDiddie at Monday, April 02, 2018

I see Ted is clueless again. Boomers are largely richer and know that Soc Sec cuts, if they happen, won't hurt them. They're voting exactly for their own interest.

The guy could have a real future in satirical humor if only he could get his own jokes.