The latest on CD-7 and District K

-- Yesterday, in the midst of Monday afternoon business, a knock came at the door, and the wife, working from home and stricken with an upper respiratory infection, yelled out a salutation.  It was a blockwalker for Lizzie Pannill Fletcher, who as it happens also had the first mailer in the #TX07 runoff between she and Laura Moser drop in our box later that same day. 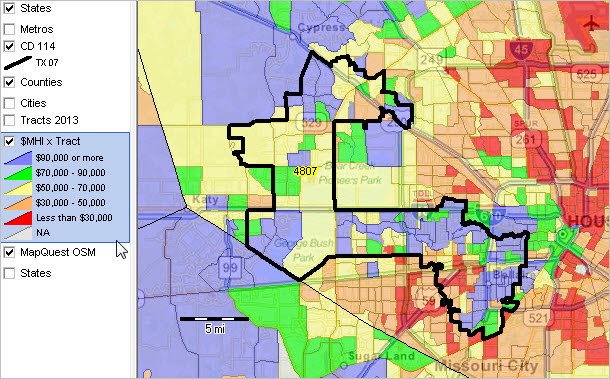 After the visitor identified himself and Mrs. Diddie declared our support for Moser, the caller asked (if he could ask) why.  My wife said, "because Fletcher is too corporate".

That evening, as I retrieved said advertising piece and the rest of the post from the mailbox, I noticed that the neighbor two doors down had a 'Lizzie' yard sign out in front.  This neighbor had not previously committed last month to a candidate lawnwise, so this was a conversion of sorts for Team Fletch.  It also marks the strategy for the March 7 front-runner: go into your opponent's area of strength, and do so strong.

Ours is a working-class neighborhood adjacent to Meyerland.  I haven't bothered to check the precinct tallies but my guess is that Moser did well in my part of town (her grandmother was the first female director of the city's Jewish community center, and the daughter of a rabbi from Congregation Adath Emeth, now part of the United Orthodox Synagogues of Houston, a nearby branch of which was recently forced to close and be demolished after repetitive flooding; another Harvey victim).  Ms. Pannill Fletcher is really more of a West University/Bellaire/Memorial kind of Democrat, with her law pedigree and slightly more conservative POV.

This is a long way of saying that if I had to place my wager today, I would bet that LPF is likely to prevail in the runoff on May 22.  Team Moser: your work is cut out for you.

-- It turns out to be more than the normal crying shame that Houston City Council member Larry Green died prematurely ... because he died of a drug overdose.  His drug usage was perhaps something more than the usual recreational, too.  This development stains his glowing posthumous reputation and plays to a regrettable stereotype.  As with the resignation of JP Hilary Green -- the lurid drug and sex stories that came out a year ago about her, about her acrimonious divorce with ex-husband and former city comptroller Ronald Green -- and combined with the accusations and charges against Lege members Ron Reynolds and Borris Miles, Houston black Democrats are now compelled to make certain they get CM Green's replacement (and Judge Green's, whenever that occurs, by a vote of precinct chairs in Harris County) correct.

This new elected official must prove worthy of carrying a heavier burden to hold himself, or herself, far beyond any reproach.

To that end, the special election for the vacant District K seat -- a .pdf map can be seen here -- to be held on Saturday, May 5, with an abbreviated early voting period beginning April 23 through May 1, has nine contenders.  Of those I would surmise that Larry Blackmon, Pat Frazier, and Martha Castex-Tatum would be the three with the highest name recognition, the campaigns making the strongest effort, and the most likely of two to move on to a runoff.  I'll be following Ashton Woods' lead here, and unless I hear differently from him I will take it that he is supporting Castex-Tatum.
Posted by PDiddie at Tuesday, April 03, 2018

Good Blog.
All In 1 https://allin1-net.blogspot.com