The Texas Progressive Alliance Marched for Science in celebration of Earth Day this past weekend. Here's the lefty blog post roundup. 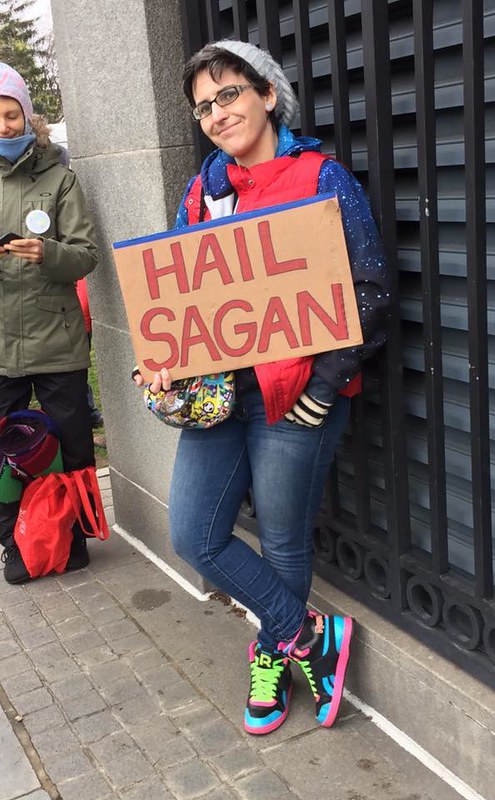 Off the Kuff analyzed the Texas Lyceum poll of attitudes towards Trump and 2018 races.

Easter Lemming remarks on the great Houston Chronicle endorsement for Pat Van Houte for Pasadena mayor and tells you a bit about city election political funding.

SocraticGadfly writes about — with photos — Earth Day 2017 and climate change reminding readers that time is running short, and that a carbon tax, a strong carbon tax, must be the baseline of any solution.

Back a week early from his fishing trip, CouldbeTrue at South Texas Chisme draws a bead on the TXGOP letting the lobbyists roam free range in the Lege.

Texas Leftist comments on the "cracked and packed" gerrymander of Texas House redistricting schemes that were struck down again by the courts.

Ted at jobsanger, like too many other devoted Clinton supporters, keeps driving the wedge deeper between that faction in the Democratic Party and the Sanders coalition.  Presenting the opposite point of view, the Houston Communist Party watched Bernie Sanders describe how his 2018 strategy for Democrats should terrify Trump ... but is likely to enrage Blue core constituencies.  And following on that, Ally Boguhn at Rewire wants to know why the DNC is supporting an anti-choice Democrat.

The popular political drama from the last decade The West Wing turns out to be a lousy model for the Democratic Party, observes PDiddie at Brains and Eggs.

Txsharon at Bluedaze wonders aloud how far Apache Corp.'s harassment and intimidation in Toyahvale (near Balmorhea) will go.  And Texas Vox reports that the EPA will hold a public hearing via teleconference today.  Let them know how Trump's war on regulations affect real people.

The Lewisville Texan Journal has city council and school board races on its ballot and early voting for the May 6 election begins this morning.  That's true across Texas for your local elections, too, and don't forget: you still need your photo ID, or be prepared to sign an affidavit attesting as to why you don't have one.

While on vacation in his hometown of Cincinnati, Neil at All People Have Value found the Grim Reaper supporting Trump at the March for Science in that city ... and Abe Lincoln speechless.  APHV is part of NeilAquino.com.

As we commemorated the 181st anniversary of the Battle of San Jacinto this past weekend, the Rivard Report has two articles  about the recently-revealed plans to restore Alamo Plaza, one from the historic preservation view, and one looking forward to connecting the plan with the goal of having a vibrant public space.

Even with Greg Abbott's support, the "bathroom bill" still faces an uphill battle in the Texas House, writes Peggy Fikac at the San Antonio Express News.

Texas Watch describes HB 1774 and SB10 as the "Blue Tarp" bills, reducing incentives for home insurers to pay claims in full and on time.

Somervell County Salon sees 'strike two' called on Sid Miller's Hogpocalypse bill, and and the TSTA Blog isn't having it with Dan Patrick's spin on the budget.

Michael Li compares the 2011 and 2013 statehouse maps in the wake of the Fifth Circuit ruling that the 2011 map was passed with discriminatory intent.

Paradise In Hell attended the Ted Cruz town hall (which Cruz did not).

Lone Star Ma presents an Earth Day-themed reading list, and DBC Green Blog asked the March for Science to please give his Earth Day back.

And Purple City says goodbye and leaves us with a few of the ideas it didn't get to finish exploring.
Posted by PDiddie at Monday, April 24, 2017

Fuck Ted. I use some of the links you have from TxPrgs members who don't often submit to Kuff, as well as a few outsiders that he doesn't have.

But, Ted's jumped even harder into an empty pool with that than he did last fall.

He's learned nothing from the last election. He still graphs a poll every single day, and the only thing that has lost more credibility than Hillary Clinton are the polling outfits. Beto O'Rourke tied with Ted Cruz? Whozit Castro leading him? This is for Democratic fundraising purposes exclusively.