It would be cool if all of those petitions we signed had actually tipped the scales on the Trans-Pacific Partnership, but the fact is President Obama's criticism of Elizabeth Warren, dismissing her as "a politician like everybody else", turned out to be the most serious political miscalculation the man has made in his six-plus years in office.  And yesterday afternoon, he paid for that mistake.


The president's supporters said they will try again, and Obama summoned key Democrats to the White House to discuss possible strategies. One possibility was to drop a contentious issue dealing with countries that manipulate their currency, but it was unclear whether that would resolve the impasse.

What was clear, however, was that Obama suffered a rebuke from his own party, led by some who served with him in the Senate.

Only one Senate Democrat, Tom Carper of Delaware, voted for a GOP-crafted motion to start considering Obama's request for "fast track" trade authority. Fast track would let the president present trade agreements that Congress can ratify or reject, but not amend.

That's the part progressives have a problem with, along with the fact that almost nobody knows what's in it, and even US Senators  are barely allowed to learn the details.  If you want to know what kind of things they're trying to keep a secret... continuing Chinese child labor is one.  Tom Tomorrow, in his cartoon on Monday (before anyone anticipated Tuesday's meltdown) establishes the premise as well as the objectionable items. 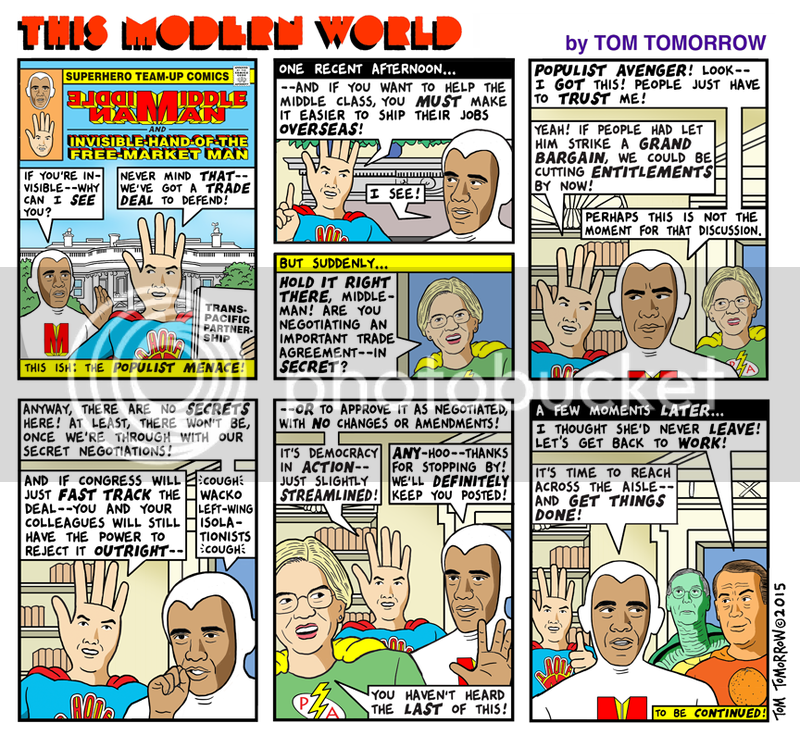 Back to yesterday's vote.

Tuesday's vote highlighted the deep divide between Obama and the many congressional Democrats who say such trade deals hurt U.S. jobs. Leading the fight against fast track are labor unions and liberal groups, which are crucial to many Democrats' elections.

Sen. Sherrod Brown of Ohio, another strong opponent on trade, told reporters that Obama "was disrespectful to her by the way he did that," and "made this more personal than he needed to." Brown said he suspects Obama regrets the remarks.

The administration had planned to invite Senate Democrats to the White House on Monday to discuss trade, but it canceled the event, citing conflicts with a Senate vote on another matter.

Oops.  Your takeaway here is that the matter is far from over.


Numerous Senate Democrats said they would back fast track only if Republican leaders cleared a path for three other trade measures.

Blahblahblah TL;DR for me from there.  Too wonky, and besides, what we do here is discuss the political implications.  Besides the obvious, Hillary Clinton has been straddling the fence on TPP of late.  But not early on.

Clinton, meanwhile, has provided almost no cover for Obama on the trade issue even though she played a role in the early talks on the TPP and has long claimed the “pivot to Asia” as one of her most important accomplishments as Obama’s first secretary of state.


She's been mum on it for awhile as the schism opened between Obama and progressives on the trade deal.  She's been mute, in fact, on pretty much anything and everything for the past three weeks.  Still not surprising me, Ted, on how progressive she is.

The implosion of the president's signature second-term issue drowned out a very important conversation being had at the White House on poverty in America.  Obama was more candid than his usual in his remarks about that also.  But that topic could be a separate post (which probably won't get written now, what with the Texas Lege wrapping up with a whole host of shitty legislation, the Houston mayor's race and the presidential campaigns warming up, and FSM only knows what else might break).

So as the repercussions of the Senate Democrats' payback continue to ripple outward, there's an emboldening of progressives that could grow into something more meaningful down the line, particularly if the president is forced to beat a full retreat on TPP.  That seems unlikely, but there are many more deals to be cut now in exchange for getting fast-track back on track.

Update: See -- and listen to -- more at Bradblog.  Matt Yglesias at Vox says Obama's got bigger free trade problems than just his disrespecting of Warren.  And Politico employs their typical histrionics in revealing some additional fissures in the Democratic caucus.

Update II: And just like that, the deal is back on again.
Posted by PDiddie at Wednesday, May 13, 2015

Good, trade bills such as the ones proposed are bad for the working people in this country and quite often for the other country as well. NAFTA hurt the small farmers in Mexico as they could no longer compete with American farms which are heavily subsidized. That is one of the reason that so many of them sought their fortunes in the north.

Excellent point. Republicans virulently opposed to immigration should be blocking free trade bills on that basis.