B.B. King died last night, and so did a lot of bills in the Texas Lege

-- First, let's pay our respects to the legend.

-- "Big Tex" Cecil Bell's anti-gay marriage bill died at midnight, but may rise as a zombie if it can find a live one to latch onto. 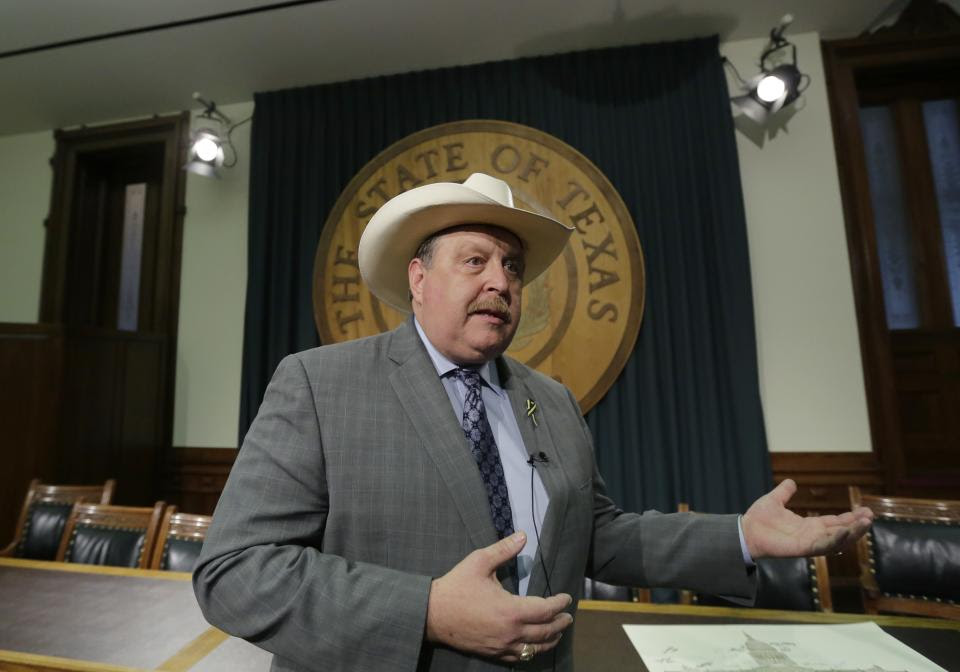 Bills he has authored this session would do everything from taking the ability to issue marriage licenses away from county clerks to stripping salaries from local or state employees who issue same-sex marriage licenses.

Bell's strongest bid fell short Thursday night when House Bill 4105, a bill that would have forbidden state or local governments from using public funds to issue same-sex marriage licenses, failed to pass the House before midnight — the deadline for House bills.

Enough Republicans had signed on as co-sponsors to guarantee the bill's passage had it reached the floor, and Democrats spent Thursday prolonging debate in an attempt to run down the clock and prevent Bell's legislation from being heard — a practice called "chubbing." They were ultimately successful.

While the bill is now dead, Bell is not out of moves. He could still attempt to attach an amendment to a related Senate bill.

"From my perspective, no bill is dead as long as there are are other bills in front. You just have to find something that's germane," Bell said after passage of the House deadline spawned hope among opponents that the measure is done with for this session. “The session still moves on.”


Marriage equality advocates remain on watch to destroy its brain.  More on how it went down last night, and the ramifications moving forward, from RG Ratcliffe at Burkablog.

Update: Once again, well-analyzed and well-written from Hooks at the Observer.

It was a very dumb bill from the start, and mismanaged by its supporters even by the low standards of the Texas Legislature. It was filed very late—literally on the last day a bill could be filed, March 13—and then it sat around. By the time it was eligible to come to the House floor, it was so far back on the calendar that it became easy for Democrats to talk and talk and talk—a tactic known as “chubbing,” for some probably ungodly reason—until the midnight Thursday deadline for considering yet-unpassed House bills.

Immediately, the posturing began. Democrats celebrated the death of 4105 as a triumph of legislative cunning and tenacity. Conservatives bashed House leadership while simultaneously claiming the bill’s existence was evidence they were “#StillWinning,” even if the bill got hara-kiri’ed. On Friday, the overwhelming majority of the House GOP caucus pledged their undying support of traditional marriage in a flowery letter. They wanted the bill to have passed so bad, they said.

It makes perfect sense for the Democrats to claim total victory here, especially since they will have few other chances this session. Gay marriage and gay rights are a huge issue for the party, though it’s hard to predict the practical consequences of Bell’s bill given that the Supreme Court soon might effectively sweep away the relevant statutes. And Democrats certainly were a major reason why the bill died: Chubbing isn’t as tough as filibustering, but they did smart work over the last week to slow the process just enough.

But if they hit a home run here, it’s because they got an easy pitch. Most House GOPers, whatever their other faults, still know a stupid bill when they see one. There’s a general level of acknowledgement in many quarters—even among some social conservatives—that the increasingly Sisyphean struggle against gay marriage is a lost cause, and a distraction from causes the godly folk really care about, like abortion. (Importantly, the business lobby, the Legislature’s one true Almighty Power, is tired of these shenanigans.)

In other words, if House Republicans wanted this to pass, it would have.