Income inequality, debates for the 1%, and abortion clinic bombers

-- Paying women the same as men is hard work, to paraphrase a previous Texas governor (who fell upward).  And the national media is all over it.  Charles beat me to this, but it's worth repeating.

Just one week after Greg Abbott, Texas' attorney general and the GOP's nominee for the state's gubernatorial race, skirted around a question on equal pay, the executive director of the Lone Star State's newest Republican PAC stumbled through her response to a similar question in a television interview on Sunday.

Salon reports (see next) that this fascinating line of argument comes via Cari Christman, who heads Texas's Red State Women PAC. Local ABC affiliate WFAA asked whether her organization believes Texas needs an equal pay act. This has become an issue in the state gubernatorial race, as Wendy Davis faces off against former attorney general Greg Abbott. In his last gig, he convinced the Texas Supreme Court that the Lily Ledbetter Act-which gives women longer to file gender discrimination claims after leaving a job-didn't alter Texas's statue of limitations.

As Laura Bassett at the Huffington Post points out (see below), Texas gubernatorial candidate Wendy Davis has been making Republican opponent Greg Abbott's record on equal pay a focus of her campaign. As attorney general, Abbott successfully argued before the Texas Supreme Court in a lawsuit brought by a female professor that the Lilly Ledbetter Fair Pay Act, which extended the statute of limitations in such cases, didn't change Texas' state statute of limitations.

During a Sunday interview with WFAA's Inside Texas Politics, host Jason Whitely told RedState Women Executive Editor Cari Christman that Democrats had accused Republicans of "hitting the panic button" and launching the PAC in the final months before the 2014 elections after gubernatorial candidate Greg Abbott was criticized for campaigning with Ted Nugent. Whitely also pointed out that Abbott had recently said that Texas did not need new laws to protect women against pay discrimination.

Last week, on the same show, GOP nominee Greg Abbott declined to answer whether he also would have vetoed the equal pay act, called the Lilly Ledbetter Act, named after the federal version of the law. Three years ago, Abbott's office successfully argued before the Texas Supreme Court that federal equal pay protections do not apply in Texas. The 2012 decision determined that a female college professor did not have the right to sue because she discovered the alleged discriminatory pay more than 180 days after she was hired. The Lilly Ledbetter Act provides that a suit can be filed within 180 days of a woman discovering the pay discrepancy.

Democratic candidate Wendy Davis has been going after Abbott on equal pay in recent weeks. In addition to dodging the question of whether he supports equal pay, the Davis camp points out, he actively fought against it during his career as Texas Attorney General. Abbott successfully argued before the Texas Supreme Court in Prairie View A&M University vs. Chatha that federal equal pay protections did not apply in Texas, so a female college professor who was paid unfairly did not have the right to sue more than 180 days after the discrimination began.

-- And just so everyone understands precisely who the Republicans on the ballot answer to, witness the development of a proposed debate between Dan Patrick and David Dewhurst over the weekend, to be held at the 'C' Club in River Oaks.  Except now it's not.  Follow Quorum Report's bulletins, beginning late Friday afternoon...

Dewhurst and Patrick to make their case to some of Houston's business elite
"It's a sign of what kind of government we have," said one observer after hearing the news Friday afternoon that Lt. Gov. David Dewhurst and Sen. Dan Patrick will debate behind closed doors in a room with some of Houston's business elite.
The debate, first reported by the Houston Chronicle, will be held at the River Oaks Country Club and is being hosted by the C Club of Houston. No press will be allowed.

Then on Monday morning...

Patrick tries to pressure business group; Dewhurst says he wouldn't mind if C Club debate is open to the press

Sen. Dan Patrick on Monday asked that the business-friendly C Club of Houston allow the media to attend tomorrow's planned Lite Guv debate at River Oaks Country Club. More than a few eyebrows were raised on Friday when it came out that Lt. Gov David Dewhurst and Patrick have agreed to debate behind closed doors in front of some of Houston's business elite.

PATRICK TAKES A PASS ON CLOSED-DOOR DEBATE IN RIVER OAKS, DEWHURST WILL STILL SPEAK TO C CLUB
Patrick had asked for forum to be open to the press; Dewhurst will speak to them regardless of Patrick's decision

A spokesman for David Dewhurst indicated the incumbent will appear before the business group, despite Patrik's decision to pull out. "Yes. Lt. Governor Dewhurst appreciates any opportunity to speak to groups of Texans and looks forward to debates and forums that are open to the press in the near future," spokesman Travis Considine said.

In case you didn't buy a program, challenger Patrick is the Buc-ees populist standing up for the TeaBaggers little guy, and wounded, bleeding incumbent Dewhurst is the elitist grubbing for five- and six-figure checks.  This is the most perfect representation of what the Republicans have devolved to than anything you will ever see.

Wayne Slater at the DMN in his Friday story linked to the 'C' Club's site listing their members, but now the club has pulled it down... which is why I took a screenshot. 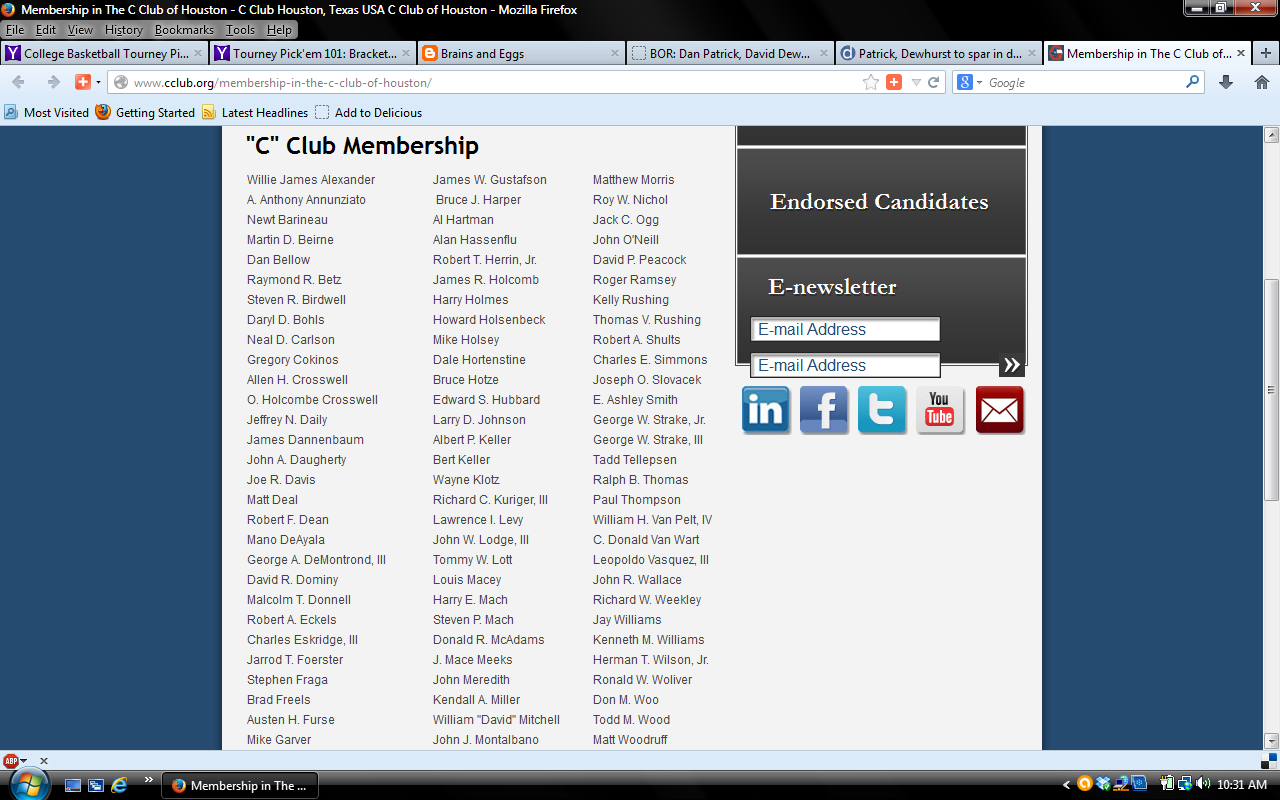 Yes indeed, we already knew that was how Republicans roll.

-- Last, the abortion clinic bombers are making a comeback.  I wonder if these terrorists will be prosecuted this time.  Eric Holder, I'm not looking at Greg Abbott.
Posted by PDiddie at Tuesday, March 18, 2014