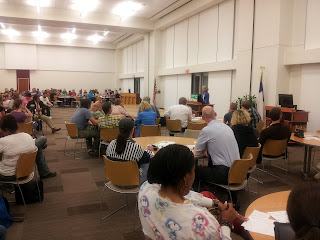 Three hundred people, not all of them students at Lone Star College, and not all the students present as required for curriculum. If I hadn't taken the pictures myself, I never would have thought it happened, either.

Despite reading Stace and Egberto all these years, I had no idea there was such a thriving nest of communist pit vipers in Kingwood.

This is exactly what conservatives have been warning us about for years: damn liberal professors corrupting the minds of our impressionable young people.

One of those who sponsors the group and hosted the event indicated to me that when they polled 900 students four years ago, the campus went 61-39... for McCain. So maybe Republicans don't have so much to worry about after all.

Still, at a time when the Harris County Green Party can barely get fifty at a monthly general meeting, and the leverage of teachers over students notwithstanding, 300 people on an NFL Thursday night is, well... unbelievable. 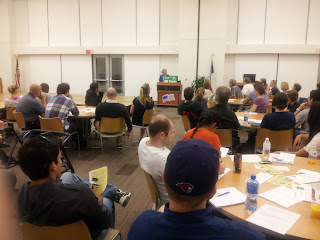 Dr. Stein touched on everything her presidential campaign is about for the hour she spoke, and answered questions for another thirty minutes, before being greeted by about 40-50 of the attendees for face time and photos. Earlier in the day it was the same phenomenon at U of H: students thronged around her in rotating groups of twenty to thirty, listening raptly and snapping pics on their cellphones. A few I spoke to as I distributed lit knew who she was, and were delighted to see her on campus.

I haven't spent much time on college campuses in the past few years, so I'm sore from all the walking and was miserable in the heat and humidity for what little I did yesterday. My shin splints fired up and I went hypoglycemic, necessitating a sit-down for about fifteen minutes with a sandwich and ice tea while others did the work.

But this morning, I'm still agog at what the potential is for a progressive (not necessarily blue, although by extension they will benefit) movement in Texas. 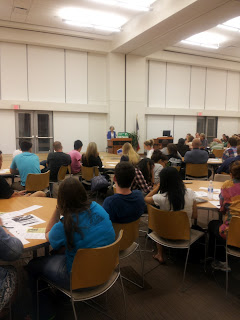 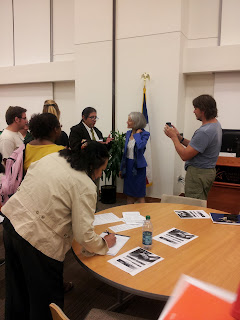 Jill Stein takes a "Toxic Tour" of the Houston Ship Channel and East End this morning, followed by a press conference at 11 at Tranquility Park, with Juan Parras of t.e.j.a.s and Tar Sands Blockade activist Ben Franklin, who was choked, pepper-sprayed, Tasered, and then arrested in east Texas last week. Yesterday, actress Daryl Hannah was also arrested, as was a Wood County great-grandmother, charged with trespassing... on her own property.