With aspects of the case still pending in his courtroom, Judge Trey Loftin sent fliers to voters saying he forced the U.S. Environmental Protection Agency to back down.

Loftin, who is campaigning to keep his state judgeship in a county west of Dallas, also sent out materials with the image of talk show host Rush Limbaugh, who credited the judge’s ruling in favor of driller Range Resources Corp., based in Fort Worth, Texas, for getting the EPA to reverse course. 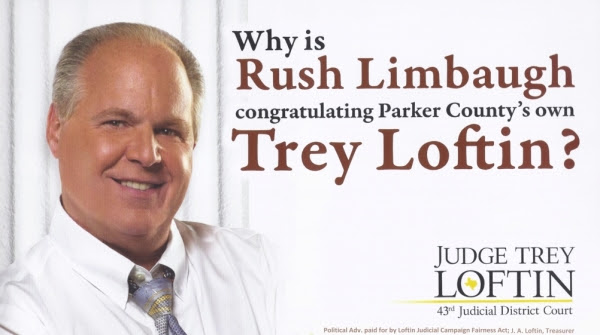 (Image from Parker County Blog, an avid supporter of the judge)

What Loftin might be suggesting here -- besides a separate case that EPA settled with Range in March -- is the resignation of Dr. Al Armendariz from his post as director of EPA's South Central region just last month. While the mail piece doesn't quite go that far, reported eyewitness accounts have the judge commenting in campaign appearances that his court decisions resulted in Armendariz's firing.

Except of course that Armendariz wasn't fired. Continuing from the Bloomberg article, which quotes the following text right off the back of Loftin's mailer:

“The EPA, using falsified evidence provided by a liberal activist environmental consultant, accused and fined a local gas driller of contaminating wells,” according to a campaign flier for Loftin’s campaign. President Barack “Obama’s EPA backed down only after Judge Trey Loftin ruled that the evidence was ‘deceptive.’”


At least the law is fairly clear.

The Texas code of judicial conduct prohibits judges from commenting on pending or impending cases "in a manner which suggests to a reasonable person the judge’s probable decision."

"A judge shall abstain from public comment about a pending or impending proceeding which may come before the judge's court in a manner which suggests to a reasonable person the judge's probable decision on any particular case."

“The problem of having judges run for office is that sometimes they cross a line in trying to get elected,” James Alfini, a professor of law at South Texas College of Law in Houston and co-author of a book on judicial ethics, said in an interview. “In this case, I think he crossed a line.”

Even without specific references, the mailer may cause a reasonable person to think Loftin was biased in the case, said Keith Swisher, a professor of law at the Phoenix School of Law and expert on judicial ethics. “The fact that a specific name wasn’t used doesn’t provide” an out, Swisher said in an interview. ...

“I don’t think a judge should ever comment about a case pending in his court,” Craig Towson, Loftin’s opponent in the Republican primary on May 29, said in an interview. “One could feel slighted if you have a judge commenting on the case.”


A complaint will have to be filed with the state commission on judicial conduct for any action to proceed further. So we'll wait and see what happens.

Update: WFAA in the Metroplex reports that Parker County Sheriff Larry Fowler, who was quoted in a separate mailing as endorsing Loftin, called the county's residents with a recording that stated he in fact did not endorse the judge, and furthermore did not authorize the use of his name or photo in the mistaken mailout.

(Whatever one may think of Judge Loftin's actions in this regard, it appears that Sheriff Fowler is pretty mad about the endorsement that wasn't. Robo-calling all the landlines in the county -- even an exurban one like Parker -- isn't cheap.)
Posted by PDiddie at Thursday, May 24, 2012

My neighbors and I spent over 20K in attorney trying to see the books of our HOA. After ten years there was a one week trial and a Parker County jury found the Board of Directors had done many things wrong. The Board was ordered to show their records among other thinks. Parker County District Judge Chrestman oversaw the trial and the preparation of the judgment and Permanent Injunction ordering the Board of Directors to obey a ton of Texas laws they had ignored. Attorney Barton Reeder represented the plaintiffs and they had to bring the Board of Directors back into Judge Chrestman court two times for contempt. The Board simply refused to obey the order. Judge Chrestman retired. Out of money and with no attorney I filed a motion on my own behalf asking the court to enforce the order in Trey Loftin's courtroom. The attorney for the HOA and his firm were large contributors to Loftin's campaign fund. Without even hearing me Judge Loftin said I was in contempt of court and practicing law without a license. He refused to enforce a lawful order issued by the 43rd Judicial District Court because he was not the judge who signed the order. He appears to want another trial in front of him. My neighbors and I do not have another $20K for another trial. We have found over $20K in funds were missing and the Board did not pay IRS taxes for 7 years. This is one reason they did not open the books and records to the membership. Now our HOA is for sale at 1/2 price. Is justice for sale in Texas? When a large campaign contributor wins cases without a hearing something smells. I am not an attorney and have never played one on tv. I was present when all of this happened and this is what I saw.

The case was Aguire v Horseshoe Bend Lot Owners Corporation. You cannot see it on line because it was filed around 2002 and hear around 2010.