Libertarians go all in on the ganja vote

The Libertarian Party is wrapping up its national convention today (Vegas, baby!) having selected its presidential and vice-presidential nominees. I mentioned the dilemma Gary Johnson found himself in all the way back in February. Looks like he resolved it.

On the first ballot, Judge Jim Gray of California wins the vice presidential nomination of the Libertarian Party in 2012. Gray thanks (presidential runner-up Lee) Wrights for being a gentleman and said he looked forward to debating (Vice President Joe) Biden.


Judge Gray's candidacy was just rumored a week ago, and quickly bloomed into full flower. Excerpt from Tucker Carlson's Daily Caller, who broke this news; if you click the link, you'll understand why they had the inside dope first:

The decision to run with Gray “puts pot front-and-center in the campaign,” one Johnson adviser told TheDC, before adding that Johnson’s opposition to the war in Afghanistan will likely remain the campaign’s defining issue.

According to the biography on his website, Gray “currently presides over the civil trial calendar for the Superior Court of Orange County.” Gray previously served in the Peace Corps, was an attorney in the Navy JAG Corps, and prosecuted cases in the Los Angeles U.S. Attorney’s Office. He ran as a Libertarian against California Democratic Sen. Barbra (sic) Boxer in 2004. [...]

Gray was a conservative Republican who later became a Libertarian after deciding that the nation’s drug laws did more harm than good. He is the author of several books about law, politics and the drug war, and helped spearhead Proposition 19 in California, which would have decriminalized marijuana in the Golden State had it passed.

“I was a drug warrior until I saw what was happening in my own courtroom,” Gray said in 2010.


This presents a fascinating conundrum for both Barack Obama and Mitt Romney. Nobody can say with any confidence who loses more of which demographic in a scenario where cannabis is the topic. The Republicans probably have to fall out against it. They've spent all of this time and effort sucking up to the Christian bloc that they can't put the pipe down back away now. Obama is in a bigger quandary because he owned the youth vote four years ago. Even as those voters have leaked away from the President before this development, his focus on addressing the student loan crisis may have been designed to shore up some lagging support.

Twenty-somethings with a mountain of college loan debt, bleak employment prospects, and a soothing habit of anti-depressant, sedative self-medication may be one-issue voters -- if they can find their way to the polls --  just like conservative Catholics.

Tom here seems to capture many of the absurdities of the haze surrounding legalization. 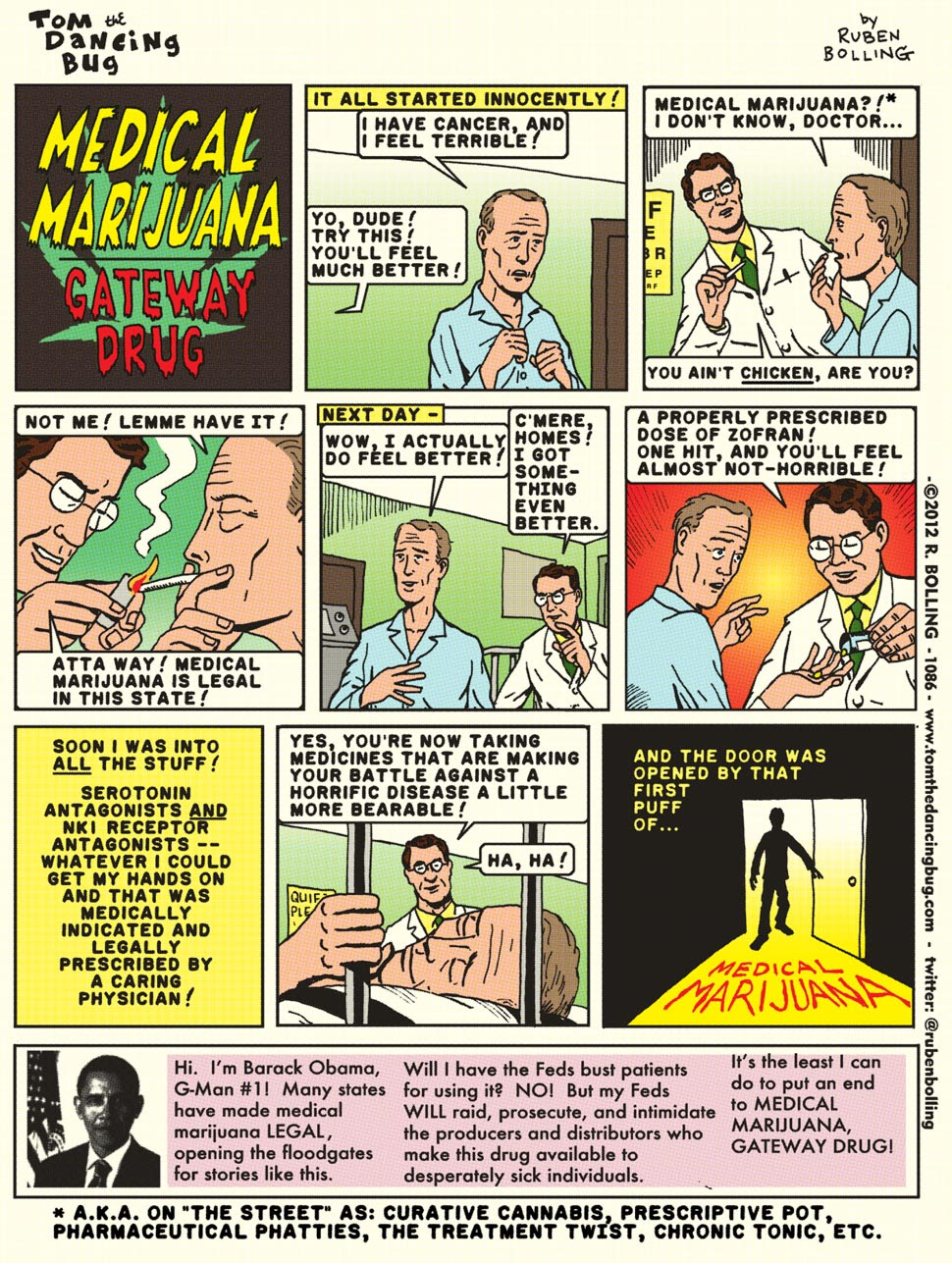 Toke of the Town has more (of the story).

Update: You did know that yesterday was the Global Marijuana March, right? Yeah.

Update II: The secretary of state in Michigan (a Republican) will refuse to place Johnson's name on the ballot in that state due to an arcane law known as "sore loser", which is to say that nobody who lost his party's nomination can be nominated on another party's ticket. This development -- particularly if it spreads to other states -- bodes ill for the Libs unless they can successfully appeal it through the courts.

Update III: More opinions of Gary Johnson and the Libertarians' prime role as spoiler from Socratic Gadfly and The Daily Beast.
Posted by PDiddie at Sunday, May 06, 2012