Out of 16,892 straws drawn, Michele Bachmann won 4,823 (28.6%) to Ron Paul's 4,671 (27.7%). Tim Pawlenty, who had focused on a strong showing in the straw poll to rescue his struggling campaign, finished a distant third with 2,293 (13.6%) in a bruising setback. Bumping along behind the horses in the money, garnering in the high single digits percentage-wise, were Rick Santorum and Herman Cain.

Mitt Romney, who won this beauty contest four years ago, declined to defend his title and came in seventh with 3.3%. He trailed even a non-attending write-in candidate.

Yes. The front-runner for the national campaign lost to ...

Governor Prophet earned 718 write-ins and 4%, yet chose to make his long-anticipated entry to the GOP presidential primary from over a thousand miles away from Iowa -- in the cradle of American secession -- but at virtually the same moment the candidates in Ames began speaking.

Romney's brand of Republican moderation will play a little better in New Hampshire, but this is essentially a three-man, one-woman contest already.

Despite what The Grifter from Wasilla may interpret from the concurrent 'corn kernel' poll.

Separately, attendees voted in a corn kernel poll, which measures the support of each Republican by the number of kernels in their respective Mason jar. By late morning, the kernel level in Sarah Palin’s jar rose just above the best-known GOP candidates — even though the former Alaska governor has not declared her intentions yet for 2012.

"There is still plenty of room in that field for common-sense conservatives who have executive experience," Palin said during a fair visit. "Watching the debate not just last night but watching this whole process over the last year it certainly shows me that yeah, there is plenty of room for more people."

Update: Ted with more. Oh, and Pawlenty gives up his seat in the clown car.

Update II: Is Rick Perry man enough to gobble a corn dog, thereby rescuing Michele Bachmann from the vicious sexism leveled at her by the global online community? 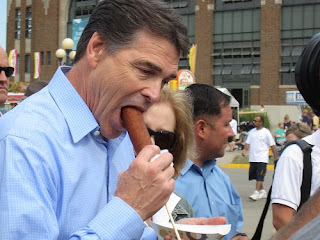 That's quite a picture of Bachmann. Is she going for the sexually-frustrated male fundamentalist vote?

She already had that bloc in the bag.

More to the point: Did Marcus just take a big first step toward FLOTUS?

And what designer's gown will he wear to the inauguration?

I don't know - a lot of them may still be holding out for Palin (who might now have to demonstrate her own oral skills).

And Marcus would be much better as First Lady than Michele would be as president.

If you really sudy the photo, it looks like the serpent is showing it's tongue.