As Evan Smith previously noted, that is a most unfortunate typo in the headline. 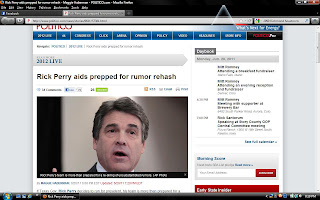 Here's the article, still with the header error, as of this posting. Update: Politico editors finally managed to get it fixed mid-morning Tuesday.

If Texas Gov. Rick Perry decides to run for president, his team is more than prepared for a re-airing of unsubstantiated rumors, circulated on and off for years in the Lone Star State, about his personal life.

The crusted-over rumors were in the ether among some attendees at a dinner hosted last week by the Manhattan County GOP, where Perry gave the keynote speech. The rumors, which have never been proven despite repeated review by media outlets, were addressed by the governor himself in a lengthy 2004 American-Statesman story that is sure to see new life if he runs

The claims, which had made the rounds for months by the time the story was written, included rumors that Perry and his wife Anita had split, and that the governor was gay.

"Crusted-over"? Sounds Santorumish. And what's wrong with being gay, anyway? Surely this cannot be the one thing in the entire world that isn't OKIYAR.

But Team Perry, asked about how it's prepared to handle them when they emerge if he runs, said it remains "false and misleading."

"As you may know, Rick and Anita Perry first met in grade school, went on their first date together in 1966, have been lovingly married since 1982 and are parents to two grown children," said top Perry strategist Dave Carney. "This kind of nameless, faceless smear campaign is run against the Perry family in seemingly every campaign, with no basis, truth or success."

"Texas politics is a full contact support, live hand grenades and all; unfortunately there are always going to be some people who feel the need to spread false and misleading rumors to advance their own political agenda," he said.

"He is the most tested, most researched potential candidate or candidate on our side," Carney added to POLITICO.

What were the results of the tests, Mr. Carney, head of the Perry aids aides?

My God but that's a lot of presumably unintentional double entendre'.

Update II: Juanita Jean wishes to underscore that Rick Perry is not gay.
Posted by PDiddie at Monday, June 20, 2011