The Why of Newt 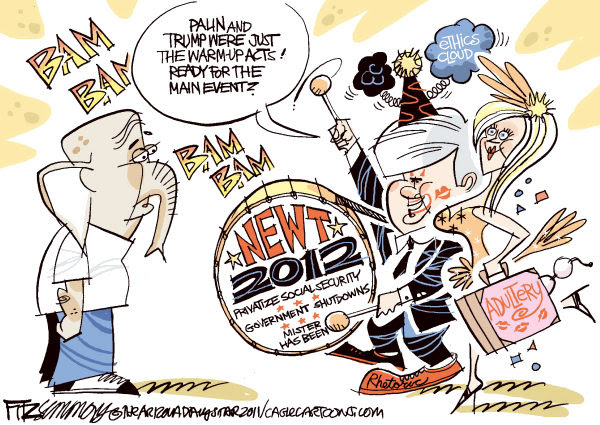 It's almost as if we never lost Trump.

Former House Speaker Newt Gingrich will announce his plans to pursue the presidency in 2012 on Wednesday, according to spokesman Rick Tyler.

Gingrich will make the announcement first on Facebook and Twitter — a bow to the power of social media in politics — and then will sit down with conservative television personality Sean Hannity on Wednesday night for an interview.

Another bitter old white guy trying to cling onto his short fame from the nineties is back in the race. FOX News leads all networks in preparing candidates for office and Newt has benefited from his time on FOX News maybe the most, but it won't be enough for him. He's changed religions almost as much as he's changed wives and with the last game show FOX put on that masqueraded as a GOP debate, it's no wonder he's getting in now.

Let the drug testing for all Americans begin.

"I don't need to see your birth certificate; I DO need your urine in this cup." Ah, the party of smaller, less intrusive government. Look for Newt in another 'exclusive' this Sunday on Press the Meat with David Gregory.

Do you think he could take Herman Cain in a debate?

Update: Try to imagine a scenario where John Edwards appears -- in 2020 -- on "Meet the Press" to announce his candidacy for the presidency. Both Edwards and Gingrich had affairs and left their wives for another woman while their spouse was suffering from cancer. How is it that the So-Called Liberal Media can take Gingrich seriously -- and George Will doesn't?
Posted by PDiddie at Wednesday, May 11, 2011

Good to know, Greg. Why, then, do you think he's running since so may Republicans seem to feel the same way about as all Democrats?

Heaven only knows. Maybe he is seeking relevance again.