"In order to save the refineries, we must flood the coonasses."

In a historic action designed to minimize the risk of catastrophic flooding in Baton Rouge and New Orleans, the Army Corps of Engineers has begun opening the Morganza Floodway to divert water from the rain-swollen Mississippi River into the Atchafalaya basin.

The second-ever opening of the nearly 60-year-old structure 186 miles upriver of New Orleans began (yesterday) at 3 p.m. sharp, when a crane lifted a gate covering one of the spillway structure’s 125 bays, releasing a gusher of about 10,000 cubic feet of water per second into the floodway. A live video feed of the procedure is being streamed online by the corps.

More of the 28-foot-wide bays will be opened in the coming days to gradually increase the flow rate to about 125,000 cubic feet per second, corps officials said.

About 25,000 people and 11,000 structures are in harm’s way, as up to 25 feet of flooding is expected in a 3,000 square-mile area of Cajun country stretching from Melville to Morgan City.

The water is expected to pass below Interstate 10 in a day and reach Morgan City in three days, said Col. Ed Fleming, commander of the corps' New Orleans district. 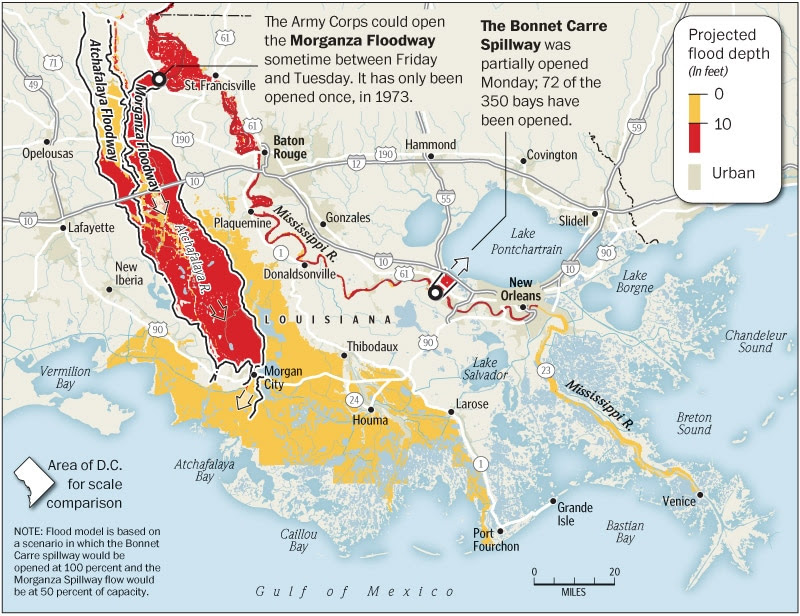 The Morganza control structure was completed in 1954 as part of the corps’ sweeping flood-protection upgrades to prevent a repeat of the Great Flood of 1927.

The only other time the spillway opened was in 1973 to relieve pressure on the Old River Control Structure, a critical barrier 35 miles upriver that prevents the Mississippi from its natural tendency to shift course to the Atchafalaya Basin, a steeper shortcut to the Gulf of Mexico.

Such a shift would have a catastrophic economic impact on the ports in New Orleans and Baton Rouge.

It's not like we were all buying American-farmed catfish in favor of the much-less expensive, more bacteria- and chemical-laden Vietnamese swai anyway.
Posted by PDiddie at Sunday, May 15, 2011