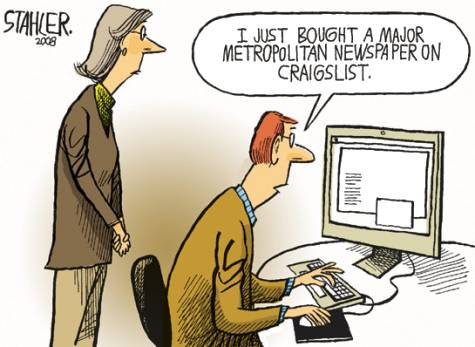 Last week George Irish, senior vice president of the Hearst Corporation and the head of Hearst's newspapers group (which oversees Texas dailies in Houston, San Antonio, Beaumont, Midland, Laredo, and Plainview) abruptly resigned from that position to become a director of the Hearst Foundation. I wrote about my personal saga with the man and the company here.

For a 64-year-old who climbed rapidly almost to the top of the company's ladder, that is NOT a promotion.

Irish follows CEO Victor Ganzi out the door, who got crossways with Hearst's board because he apparently wasn't making bold enough acquisitions. This is a truly remarkable amount of turnover for a conglomerate that has had a reputation for being tight-lipped when it comes to, well, all facets of its business, even (especially) how much money it makes. Because the company is one of the largest privately-owned operations on the planet, it has always placed a premium on loyalty and omerta. So to see this kind of drama play out publicly is itself revealing.

My guess is that he pulled the chain because Hearst vice chairman Frank Bennack, 75 -- Irish's new/old boss -- wasn't going to let him sit in the big chair, and running the dying newspaper division for another few years didn't look to be too hot an option either. That rumor is noted in this NY Post "Media Ink" column, reporting Ganzi's departure in June.

So the FNG is 46-year-old Steven Swartz, whiz-bang Harvard guy with the e-newspapers cred. He's got a tough task ahead; revitalize a company's flagship business at a time when the industry appears to be at the brink of extinction. But with his background in Hearst-related ventures such as magazines and yellow page directories, as well an eye for savvy acquisitions, he's probably the CEO-in-waiting.

All the old guys I used to work with in the business are out of it now themselves -- Rollie Hyde in Plainview, Aubrey Webb in Beaumont, Charlie Spence in Midland, and now Irish. My first Hearst boss after Irish, James Thomas, the long-retired publisher of the Plainview Daily Herald, passed away in July of this year at 84.