The "quandary" of Hillary's supporters voting for Obama 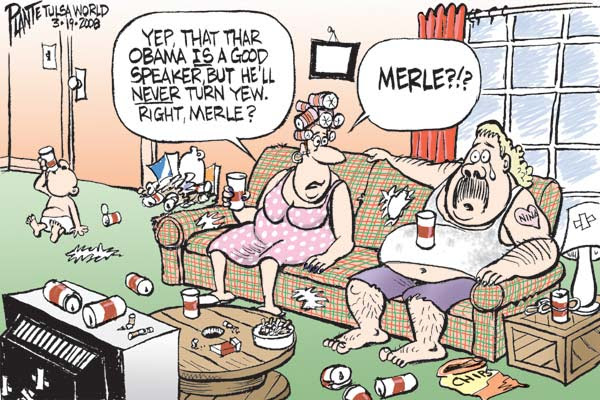 Unlike Merle in the toon above, there sadly remain far too many Reagan Democrats who haven't learned after 8 years of Bush that dancing with the GOP is hazardous to their economic and physical health. The problem is that the world can't wait any longer for them to figure it out.

It took a Depression to wise up their ancestors; maybe that's what it will take to do so again. In 2008 the presidential election quite obviously has more of a racial component than ever before, but that still isn't quite at the heart of the matter.

Here it is: Suburban and rural white people (and Latinos, especially in Texas and the Southwest) had better bury whatever resentment they may harbor about a young black man running for President long enough to vote Democratic in November, or we will all continue to suffer at the hand of the Republicans.

And that's because conservatives -- neo- and paleo- and all epochs in-between -- despise poor and middle-class people equally, irrespective of skin color.
Posted by PDiddie at Monday, March 31, 2008