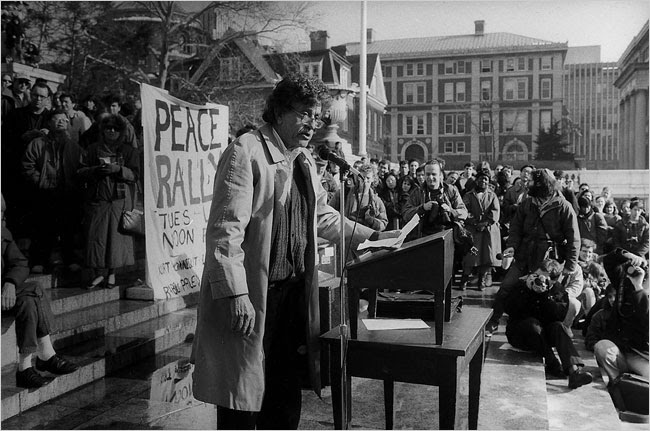 The author speaking at a rally against the Persian Gulf war in 1991.

The first book of his that I read was Breakfast of Champions, in 1974. I was a high school sophomore and thought I had just found some key to the universe. Here's what the NYT Book Review wrote when it was published the previous year:

You have to hand it to Kurt Vonnegut Jr. In his eighth novel, "Breakfast of Champions, or Goodbye Blue Monday," he performs considerable complex magic. He makes pornography seem like any old plumbing, violence like lovemaking, innocence like evil, and guilt like child's play. He wheels out all the latest fashionable complaints about America--her racism, her gift for destroying language, her technological greed and selfishness--and makes them seem fresh, funny, outrageous, hateful, and lovable, all at the same time. He draws pictures, for God's sake--simple, rough, yet surprisingly seductive sketches of everything from Volkswagens to electric chairs. He weaves into his plot a dozen or so glorious synopses of Vonnegut stories one almost wishes were fleshed out into whole books. He very nearly levitates.

Vonnegut was the greatest American novelist of our generation. That's only my humble o, but also certainly that of many others. Few writers have really grasped my mind around its figurative throat and shaken it like a dog with a rag as he did.

He was pretty much everything a free-thinking person could aspire to. His essays from In These Times were compiled into a short book called A Man Without a Country in 2005 and they chronicled his path from conservative to liberal, a trail I have similarly walked.

There's a photo of Vonnegut -- probably at an anti-war rally -- holding up a Bartcop sticker. Perhaps we'll see that and some other remembrances of the author today posted by others. I'll collect some and update here later. I'm a bit too distraught at the moment to collect and post all of my own feelings about the passing of this literary titan.

Norbizness provides the scene from Rodney Dangerfield's epic Back to School.

Katrinacrat feels the loss and has the classic quote from God Bless You, Mr. Rosewater.

My Left Nutmeg has some YouTube of the man.
Posted by PDiddie at Thursday, April 12, 2007