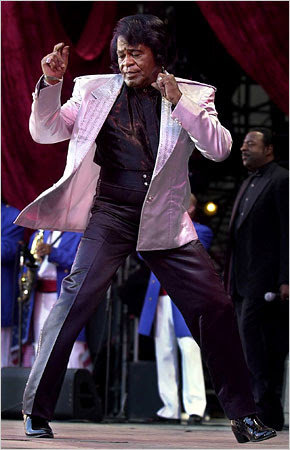 His music was sweaty and complex, disciplined and wild, lusty and socially conscious. Beyond his dozens of hits, Mr. Brown forged an entire musical idiom that is now a foundation of pop worldwide. ...

(His) stage moves -- the spins, the quick shuffles, the knee-drops, the splits -- were imitated by performers who tried to match his stamina, from Mick Jagger to Michael Jackson, and were admired by the many more who could not. Mr. Brown was a political force, especially during the 1960s; his 1968 song “Say It Loud -- I’m Black and I’m Proud” changed America’s racial vocabulary. He was never politically predictable; in 1972 he endorsed the re-election of Richard M. Nixon. ...

Brown was born May 3, 1933, in a one-room shack in Barnwell, S.C. As he would later tell it, midwives thought he was stillborn, but his body stayed warm, and he was revived. When his parents separated four years later, he was left in the care of his aunt Honey, who ran a brothel in Augusta, Ga. As a boy he earned pennies buck-dancing for soldiers; he also picked cotton and shined shoes. He was dismissed from school because his clothes were too ragged. ...

Amid the civil rights ferment of the 1960s Brown used his fame and music for social messages. He released “Don’t Be a Dropout” in 1966 and met with Vice President Hubert H. Humphrey to promote a stay-in-school initiative. Two years later “Say It Loud -- I’m Black and I’m Proud” insisted, “We won’t quit movin’ until we get what we deserve.”

When the Rev. Dr. Martin Luther King Jr. was murdered in 1968, Brown was due to perform in Boston. Instead of canceling his show, he had it televised. Boston was spared the riots that took place in other cities. “Don’t just react in a way that’s going to destroy your community,” he urged.

Heaven, like Earth, is never going to be the same now that the Godfather of Soul is performing there.