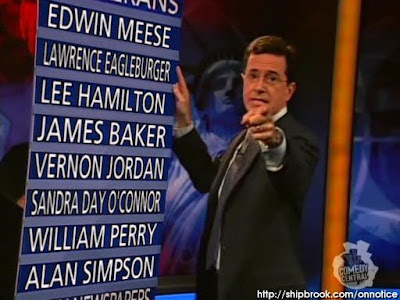 Each in their inimitable way, of course. First, Russ (from Countdown):

Then I looked at the list of who testified before them. There is virtually no one who opposed the war in the first place. Virtually no one who has been really calling for a different strategy that goes for a global approach to the war on terrorism. So this is really a Washington inside job and it shows not in the description of what's happened -- that's fairly accurate -- but it shows in the recommendations. It's been called a classic Washington compromise that does not do the job of extricating us from Iraq in a way that we can deal with the issues in Southeast Asia, in Afghanistan, and in Somalia which are every bit as important as what is happening in Iraq.

This report does not do the job and it's because it was not composed of a real representative group of Americans who believe what the American people showed in the election, which is that it's time for us to have a timetable to bring the troops out of Iraq.

Who are these commissioners and what is their expertise in Iraq — or even foreign policy? ... The entire report is contemptuous of the military, spoken of as pawns on a chess table, barriers, observers, buffers, and trainers. Never as what they are trained to be: the greatest warriors in the world. Would it have been too much to ask that one general, or even one outspoken believer in the mission from the get-go, be on this commission?

Perhaps the most systemic problem with the report is it didn't tell us how to win; it answered how to get out. The commissioners answered the wrong question, but it was the one they wanted to answer.

In all my time in Washington I've never seen such smugness, arrogance, or such insufferable moral superiority. Self-congratulatory. Full of itself. Horrible.

I think Bennett is jealous because he wasn't picked for the commission. Or maybe he's just having severe slots withdrawal.