Some of President Trump’s most ardent campaign supporters were among his most vocal opponents on Thursday after he ordered the missile strike against Syria, charging him with breaking his promise to keep the United States out of another conflict in the Middle East.

Prominent writers and bloggers on the far right attacked Mr. Trump. They accused him of turning against his voters by waging an attack that he had for years said would be a terrible idea. They also criticized him for launching the strike without first seeking congressional approval — something he said on Twitter in 2013 would be a “big mistake.”

The most vocal in their outrage were leaders from the small but influential white nationalist movement.


Well.  Who cares what those racists think anyway?

Nothing rebuilds bipartisanship post-nuclear strike in the Senate like a war.  Marco Rubio, John McCain, and Hillary Clinton all agree.


Business as usual for the neoliberals and neoconservatives.  It does also help with that pesky Kremlin buddies problem he's been having, so there's something gained for Cheetolini by starting a proxy war with Russia this week, the latest worst of his presidency.

You may recall his namesake offspring once compared the Syrian refugee crisis to a bowl of Skittles. 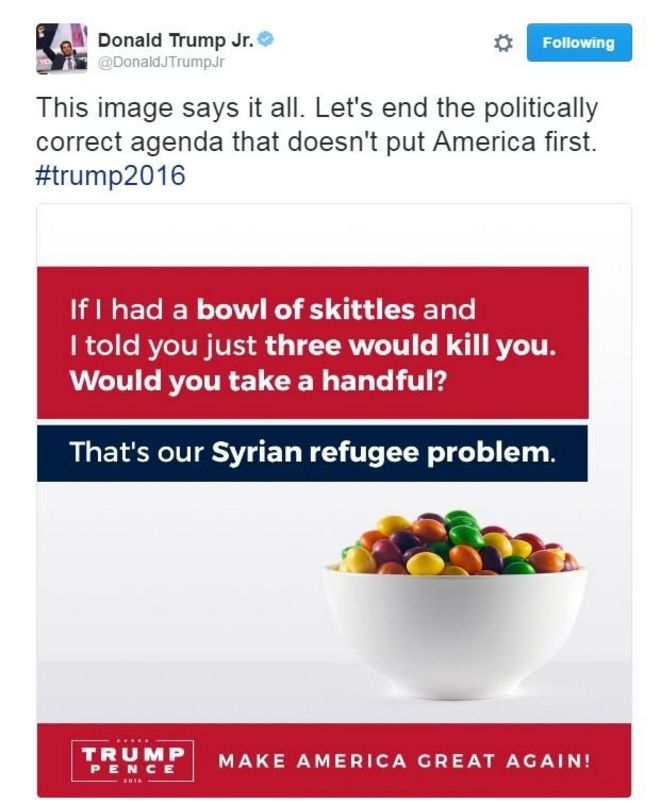 And if that guy's dad keeps bombing Syria, there will probably be many more Syrian refugees bowls of Skittles.  Unfortunately that can't be considered progress.  On the other hand, Pops did get to start his Mar-el-Lago golf weekend early, so hey, this may all turn out well by Monday.

At the very least, we should have a new Supreme Court Justice by this evening.
Posted by PDiddie at Friday, April 07, 2017

Per Juan Cole, just 11,941 (or so) bombs to go to catch up with Dear Leader in Syria last year: https://www.thenation.com/article/what-is-it-with-us-presidents-and-tomahawk-cruise-missile-strikes/