The sociopathy of Steve Ogden 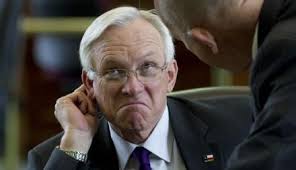 Teachers, parents and school administrators urged Texas lawmakers Thursday
to reject a school finance plan that would allow the state to cut
$4 billion from public schools over the next two years.

But one key senator cut off their pleas to tap into the state's $10 billion reserve fund, sending a clear message such an option won't be considered.

"It's not going to happen," said Sen. Steve Ogden R-Bryan, chairman of the Senate Finance Committee.

Ogden nearly didn't run for re-election in 2010, you may recall, but he thought he was the only person smart enough to solve the budget crisis he knew was coming. He sat in that hearing yesterday and said to those teachers and parents testifying: "It doesn't make any difference what you say. Nothing is going to change." In other words, fuck all y'all for wasting my time.

"You have a choice to use your savings but you are choosing not to," Sue Diegaard, who has two children in Houston public schools, told the House Appropriations Committee. "You cut $4 billion from public education, and you expect us to think it's a gift."

Carol Fletcher, a Pflugerville schools trustee, said her district, which has more than 50 percent of its students on reduced-cost lunch plans, is already one of the lowest-funded in Central Texas and more cuts will hurt.

Comparing her district to a car, "Right now, we're driving a '72 Ford Pinto, not a Cadillac," Fletcher said.

After hearing several witnesses urge lawmakers to use the reserve Ogden pointed his finger and told them to forget it.

"Hope is not a plan," Ogden said shortly before the bill passed the committee.

Ogden also said he doesn't believe what he called threats of "draconian" cuts to local schools.

"We're not cutting school budgets," Ogden said. "We're just not giving them as much money as they think they are entitled to."

Now that's a demonstration of sneering contempt that borders on -- no, actually goes ahead and crosses over to -- sociopathy. Anybody who knows Ogden is well aware of his opinion of everyone who hasn't reached a station in life similar to his own. And keep in mind that this is what passes for Republican moderation in Texas (Ogden was the only Republican senator opposing the carry-guns-on-campus bill). If he had not run again, there would likely be someone much, much worse in that seat.

Honestly, 'sociopath' is an understatement, since so many people are actually going to suffer and die as a consequence of his actions. The proper label for Ogden is 'psychopath'. Psychopaths, on the other hand, often have charming personalities. They are manipulative and easily gain people’s trust. They have learned to mimic emotion and so appear “normal” to other people. Psychopaths are often educated and hold steady jobs. Some are so good at manipulation and mimicry that they can have families and other long-term relationships without those around them ever suspecting their true nature.

And another brutal truth is that Steve Ogden is far from the only -- or even the worst -- psychopath in the Texas Legislature.

But what do I know? I'm just a shade-tree psychologist.
Update: The Rise of the Second-String Psychopaths.
Posted by PDiddie at Friday, June 03, 2011