It's quite thin, as nobody jumped in or dropped out and those who were in -- or not in yet -- had little but stumbles and speculation for the media, corporate and social, to report and feud over.

-- Let's note that with a very large field of candidates, the DNC is already laying down debate rules well in advance of the first scheduled tilt, in June.

“As many as 20 Democratic presidential candidates will be invited to the party’s first sanctioned debates this summer if they can meet new polling or grass-roots fundraising thresholds to qualify,” the Washington Post reports.

“Candidates can qualify either by attracting campaign donations from at least 65,000 people, including at least 200 people from at least 20 states, or by registering at least 1 percent in three state or national polls from a list of surveys approved by the party.” 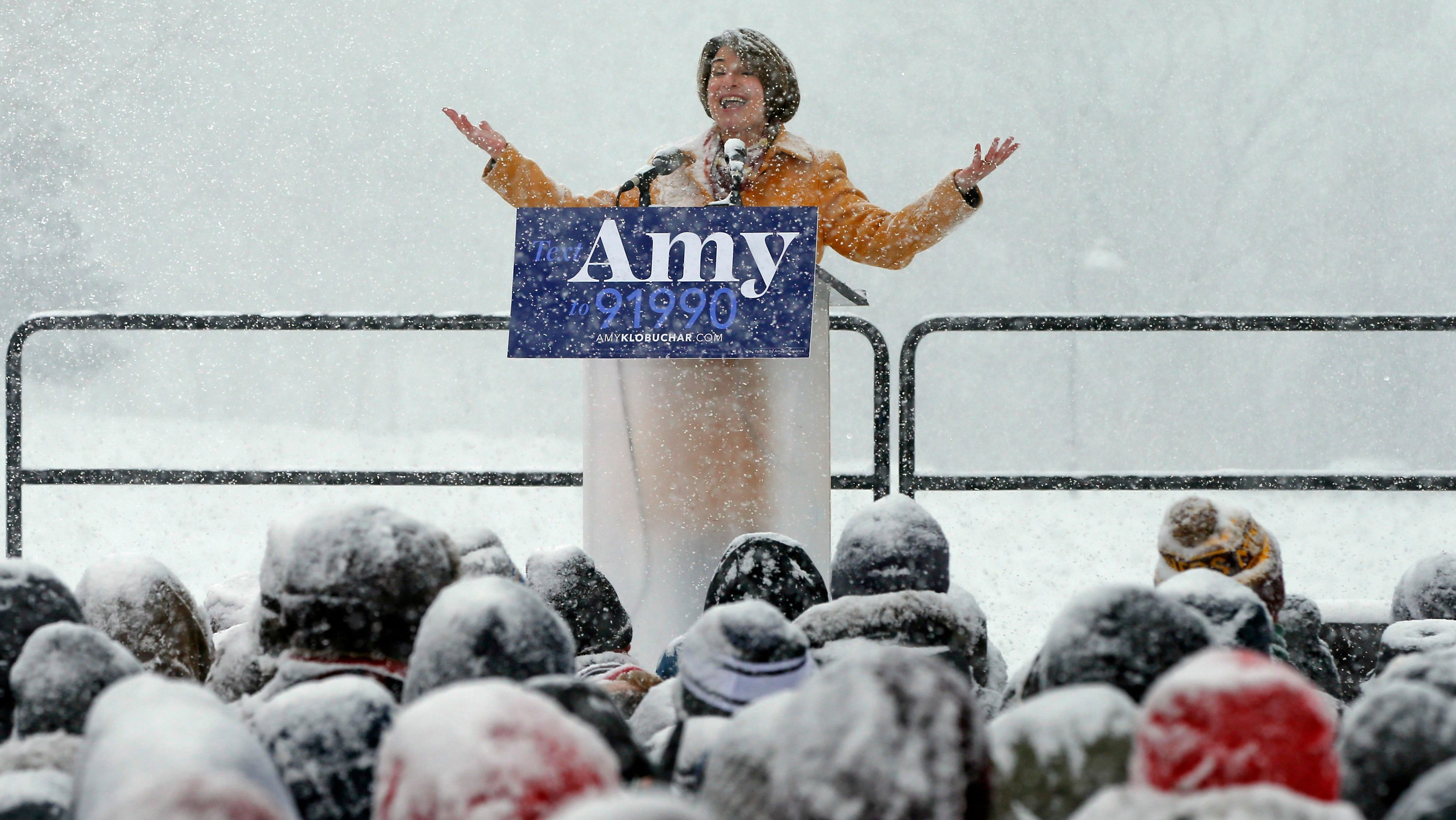 -- After launching her campaign during a blizzard, Amy Klobuchar had to speak to allegations about bullying her Senate staff.


The matter seems quelled, but look for questions about it during the next CNN townhall on Monday.

-- Speaking of Howard Schultz, his was a complete faceplant.  But guess what?  In our glorious democracy oligarchy/idiocracy, it doesn't matter.

But more interesting than the town hall’s content was its existence. Lots of people with no base of political support would like to run for president, but they can’t, because the media wouldn’t take their candidacies seriously. So why is Schultz, a political newcomer who “had the worst numbers of any potential candidate tested” in CNN’s own poll, getting such red-carpet treatment?

The answer, of course, is money. Schultz is a billionaire, and in American politics, money is a shortcut to legitimacy.

“Schultz doesn’t have to do the hard work of building a mass movement or representing a genuine constituency to get attention in our politics, because the media uses ability to spend money as a proxy for seriousness of campaign,” says Lee Drutman, a political scientist at New America. “And when the media bestows seriousness on a candidate, the public follows along.”


This, as everyone with a functioning brain understands, is exactly how Donald Trump came to be the 45th POTUS.  What's unfortunate is that many of those who voted for him -- unlike those in the executive offices of our corporate media, which just needs to cash the checks -- do not have functioning brains.  Zombies vote, y'all, and they vote a straight GOP ticket.

-- Turns out Kamala Harris is a Rap Genius.


Imagine being so high you listened to music that didn't exist yet. #KamalaHarrisRapGenius https://t.co/MwnWQfhxQk
— Adam Ullian (@adamullian) February 13, 2019

Quickly recovering, Senator Copmala announced the endorsement of progressive lioness Barbara Lee, which instantly became a bone of contention for the Berners.

-- Beto O'Rourke trumped Trump's rally in El Paso and then fueled speculation about a potential US Senate race by meeting with Chuck Schumer this week.  Politico also quoted someone anonymously saying that US Rep. Joaquin Castro would run against John Cornyn if Beto decided not to.

"Joaquin believes Beto could beat John in 2020, and if Beto decides to see this thing through and do that, then Joaquin will give him his full support, just like he did against Ted Cruz,” a source close to Castro told POLITICO. “Otherwise, Joaquin will absolutely consider jumping in and finishing the job."


This smells like twin peaks of Castro bullshit to me.  Here's a few reasons why.

1.  Beto hasn't even decided whether to jump in the presidential scrum, yet he's polling considerably stronger than Julián, and will move into the top five front-runners when he announces.

O'Rourke's e-mail network of small donors, at 743,000, is only one-third that of Bernie Sanders' -- whose 2.1 million base is larger than all other Democrats in the hunt -- but is still double that of his closest rivals (Warren, Gillibrand, Harris).  Castro has fewer than 900.

2.  It's Julián who is more likely to drop out and run against Cornyn, because he's not currently employed in government like Joaquin, his campaign is unlikely to gain traction among so many other cautious centrists, and he doesn't want to be anybody's running mate this time around.  He said so just last week (scroll to the end).

3.  Joaquin not only has some tenure in the D caucus -- he's already been a deputy whip and a chair of the Hispanic Caucus -- he sits on the House Intelligence Committee, which is a plum job for anybody with a base of representation that includes so many service members and veterans, like San Antonio's 20th District.  (Candidly, he or his brother could have defeated both Beto and Ted Cruz in 2018 if they hadn't been too fucking scared of losing.  Their reticence let Beto zoom right past them.  Don't take my word for it; read the third graf at Joaquin's Wiki.)

There's no good reason for Joaquin to give up all he's earned in a Dem majority in the House to shoot for a seat in the minority in the Senate.  Julián, on the other hand, has nothing left to wait around for if -- when -- his 2020 bid peters out.  Governor in 2022?  Not a chance if he's at 1% or less in the presidential polls in December.

And by the way: either Castro scares Wendy Davis and MJ Hegar right out of the Senate race, because even white centrist Democratic women can't compete with a Latinx of the same ideological stripe.  If neither Castro runs and one of Hegar or Davis does, look for Sema Hernandez to win the primary on the strength of the Latinx effect in statewide Donkey primaries.  She got 24% of the vote against Beto in 2018 spending just $5K, and similar to Maria Luisa Alvarado in 2006 and Linda Chavez-Thompson in 2010 -- who mashed their Caucasian establishment counterparts -- Hernandez can win the Senate primary with some reasonable fundraising even as the corporate media pretends she doesn't exist.

Beto's running for the White House in 2020, and when he comes up short will gladly be somebody's running mate.  Julián Castro could -- perhaps even should, but may still be too afraid to -- run against Cornyn in 2020.  Joaquin Castro needs to stay in Congress.

That's my reading of the cabrito entrails this week.
Posted by PDiddie at Friday, February 15, 2019