The latest existential moment for the Democratic Party

Al Franken's resignation "in the coming weeks" created it.  A measure of folks whom I still read for some temperature-taking of Team Donkey seem awfully distressed, irritated, and depressed as the 'et tu, Brute' scene unfolded over the past 48 hours. 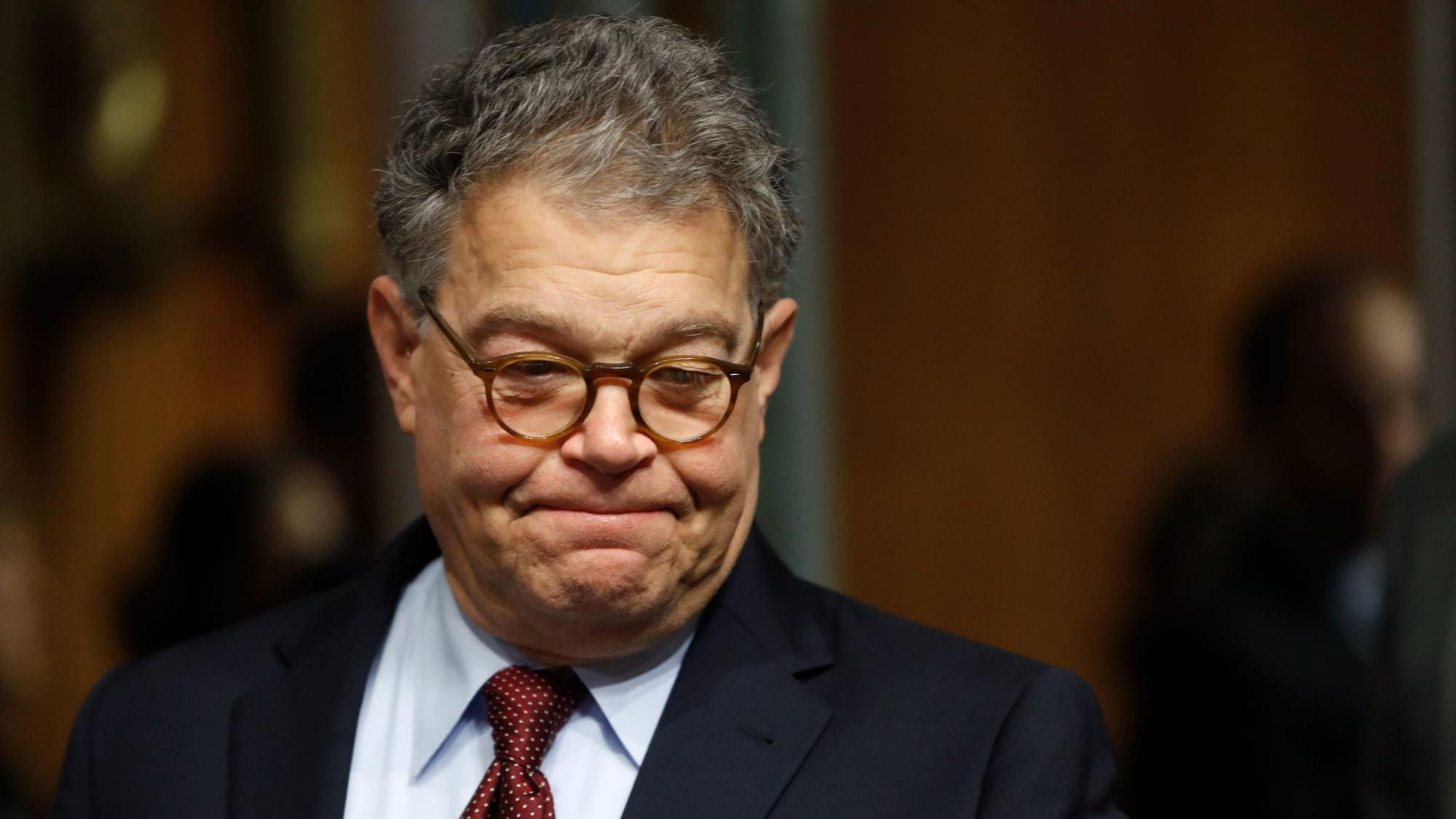 The immediate aftermath, with some catchup linkage, was summarized at Brad's yesterday.

The stunning announcement by the popular and dogged comedian-turned-Senator comes after fellow Democrats this week called for him to step down in the wake of several allegations of sexual misconduct said to have occurred before he became a U.S. Senator. Franken, who has been a champion for women's rights during his time in the Senate, maintains he either doesn't recall the incidents at all or remembers them quite differently than reported. He has described the most recent charge leveled against him this week by an unnamed victim, said to have been a Congressional staffer in 2006, as "preposterous". Nonetheless, while expressing confidence he would have been cleared by the Senate Ethics Committee of any wrongdoing, he says he will now step aside before that probe was even able to begin in earnest.

We share excerpts of Franken's remarks on the floor today, which include, as he notes, "some irony in the fact that I am leaving while a man who has bragged on tape about his history of sexual assault sits in the Oval Office and a man who has repeatedly preyed on young girls campaigns for the Senate [in Alabama] with the full support of his [Republican] party."


You might remember the post I wrote a few weeks ago where I stated that Franken should not step down, but that was blogged before incidents with other women beyond Leeann Tweeden came to light, and also before Tweeden's apparent collusion with conservative raconteur Roger Stone.  There seems to be some consensus that Franken was railroaded, and it's hard not to agree with aspects of that.  But that still doesn't condone his behavior in this new age we're living in, recognized by TIME magazine as the "fastest-moving social change (they've) seen in decades".

And everything's bigger in Texas, you know.  Separate post later on that.

Democrats being unwilling or unable to fight back is a conclusion I reached sometime in 2006.  The sad part -- and I've written this sentence here previously -- is that even the least-informed voter can sense when a politician isn't standing up for themselves against a Republican bully.  And once they understand that a politician who won't fight back for him/herself is a politician who won't be fighting for them ... it's over.  The terrorists, aka the GOP, have already won.

So did Democrats fall for another right-wing trap in pushing Franken out? It wouldn't be the first time. We discuss several such traps -- including one that MSNBC seems to have fallen for this week regarding progressive radio host Sam Seder, before wisely changing course two days later -- with longtime progressive writer and blogger Gaius Publius, who wrote earlier this week about Democrats falling, yet again, into the Republicans' "deficit trap" regarding federal spending on military and social programs. We debate why and whether Democrats fall into these right-wing traps or if they willingly choose to walk into them for some reason.

"Why is it that Democrats seem to be one foot in the Republican camp and afraid to be too much in opposition, and one foot in the Democratic camp and not so fully pro-democratic values as we'd like them to be?", Publius observes as we discuss Franken, the 'deficit trap' and more. "I would argue that it's not fear. We're not dealing with cowards here. We're dealing with people who are, in some sense, compromised by their own values. Their own values are putting them in this position where they can't please anybody."


You might want to dive deeper into that, so listen to the podcast.  The general consensus -- that I could ascertain from the many things I read and watched yesterday -- was that elected Democrats, particularly those calculating they might benefit from ousting Franken, simply aren't fighting the right battle.  At least not the one that diehard Democratic voters believe represents their values.

If ditching Franken to appeal to the female vote -- that should be read as 'the white suburban women vote' -- then that is probably a losing battle.

The Russians hacking the election (sic), aka 21st century McCarthyism, is firing up again like a Los Angeles brushfire.  And there's more blaming of the media for Clinton's loss a year ago.  Digby goes there, citing the Columbia Journalism Review's research.  If you like, I'll save you some time: Yes, her emails.  Reinforcing a narrative Clinton failed to adequately address and was unable to overcome.  Digby's fail is an inability to acknowledge that is not the media's job to lift one candidate over the other (or tear one down more than another).  They may very well do this, but that's in the eye of the beholder; more inference than implication.  The media reported plenty on Trump's pussy-grabbing but it did not sway his voters, not even the Christians.  To suggest heavier reporting of the Access Hollywood tape would have changed enough votes for Clinton to have carried the three Midwestern states she lost is ludicrous.  To assert that some inequality of reporting influenced the outcome of the 2016 election -- similar to blaming Russian bots on Facebook, for example -- is something I find not just false but irresponsible.

Reasonable, rational people -- I realize it's a stretch to call GOP voters that -- are simply not going to conclude what she has.  They don't use the same reasons or rationales.  That's not how it works in this brave new world any more, and Steve M. at NMMNB clarifies.

There isn't a "commonly accepted" moral high ground, because "commonly accepted" would have to include Republicans, whose only morality is "Just win, baby." I'll grant that. But if we look at the results of the 2016 presidential election and conclude that morality doesn't matter anymore because a con man and confessed sexual predator won the presidency, remember that voters did make a moral judgment in that election -- it's just that many of them concluded that Hillary Clinton was the less moral candidate.

Democrats have to do the right thing -- and they have to fight like hell to demand fair treatment in the press, as well as adequate treatment of Republican misdeeds. You want to imitate Republican tactics? Then work the refs the way Republicans do. Don't abandon common decency the way they do.


You really should click over and read everything I didn't excerpt.

Society is broken when you have one political party who would rather elect a pedophile to the US Senate than a Democrat.  "Moral values" don't exist when voters think the media is lying about the abuse of power and privilege that translates to dozens of instances of sexual misconduct of the kind that surround the president of the United States.  And if you believe in an old man who lives in the clouds will redeem you of whatever sins you are guilty of by simply asking him to do so ... then you are part of our society's criminal dysfunction, and will never be part of the solution until you can disavow yourself of that quaint, ignorant notion.  If you're too afraid to understand this truth, then you really should get out of politics.  It's going to be necessary in one of the first skirmishes of this fight to leave the grandest illusion to the most massive hypocrites (again, the Republicans, for those having trouble keeping up).  Rationales like 'My God is better than yours', as with the political calculus behind Trump's Jerusalem move in the face of global condemnation, or accepting a percentage of North Korean deaths as collateral damage in a nuclear war that results in a democracy for that country simply isn't cutting it. 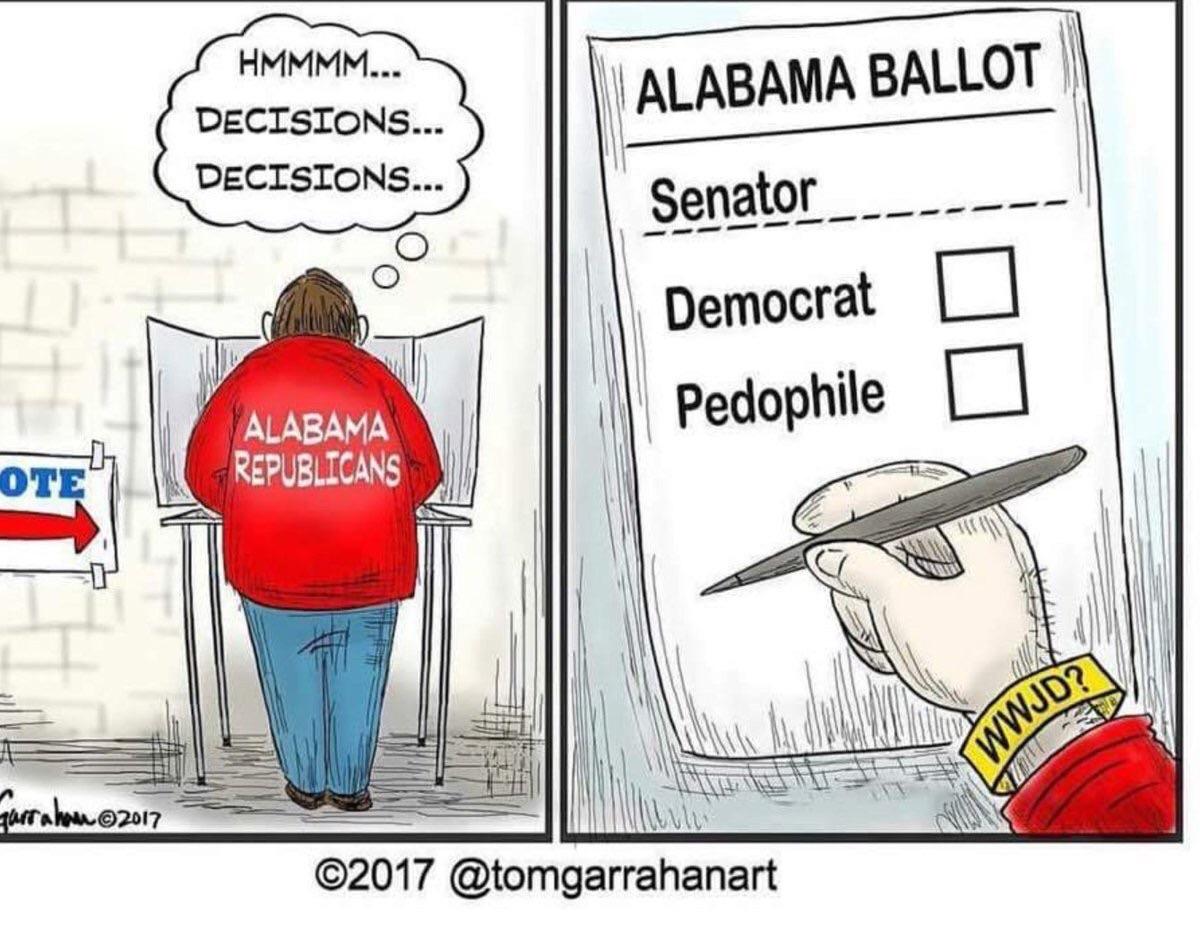 None of that is what an actual Jesus -- and not a pretend son of God -- would do, and that really shouldn't have to be said or pointed out to anyone with a functioning brain stem.

Sorry if it offends your sensibilities.  If you can't buy it -- and if you still want a Democratic party (I'm ambivalent; I want a better tool to fight back but it's the only one in the box at the moment) -- then you'd better buy this.

... (Democrats) have to focus on the pattern Lithwick describes and communicate the clear message that the Republican Party is the problem. The GOP's legislation is extreme, its contempt for democratic norms is dangerous, and it lacks all morals. (Democrats) need to make that point, persistently. There is a high ground -- but voters need to be reminded again and again that Republicans individually and collectively occupy the lowest possible ground.


If you still want your metaphors religious, then it's time to acknowledge that Democrats have been successfully demonized by actual demons.  Satan has been assisting the GOP whip their asses in Texas for a generation.  God isn't helping rescue the Democrats because apparently they're not helping themselves.

In short, the Donks have an enormous amount of fighting back to do.  Now -- and anywhere -- would be as good a time and place as any to start.  Despite all those wins across the country just a month ago, I still have doubts as to whether they have it in them, but I'm willing to be wrong about that.

Update: "Sacrificing Al Franken in order to capture the moral high ground is not a strategy":

Happy now? With an alleged serial sexual abuser in the White House, and an alleged serial pedophile about to take a seat in the Senate from Alabama, the Democratic Party has driven from office a man whose big offense appears to be occasional groping. But worry not, we’re told, by the scolds. Now that the Democrats have the High Ground, they won’t have to worry about “what-aboutism” going into the 2018 elections. Democrats can use the issue of sexual harassment to bludgeon their Republican opponents. The only problem being, as long as I’ve been covering the Democrats — going on 50 years now — they never had a clue what to do with the high ground once they gained it. Not even once. And being able to shame Republicans assumes Republicans are capable of shame, and there is scant evidence of that. Nor is there even a scintilla of evidence that voters would respond to Democratic bleating from the alleged “high ground.” Any doubts? Check the polls in Alabama.

Digby went down the I'm With Her toilet already in 2015.

And, still wondering who the Senate Dem is who most hates Borris Miles .... I need to go through the list.

My money is on Sylvia Garcia.

Miles has been a progressive fighter, but as a respectable human being -- as a decent man -- he blows goats at the Houston Rodeo. He needs to f'n go. I'm going to flame his sorry ass in a post that's on the way.

Sylvia makes sense. From Houston, knows him personally, and can elbow ahead in Dem leadership by kicking him to the curb, too.

Want me to photoshop him with a literal goat-blowing?