It was a cliffhanger.  What allowed the Democrats to hold onto some hope was the New York Times' predictive speedometer, or needle, which consistently showed Jones prevailing even as Roy Moore held a lead of 30,000+ votes and more than 5% with two-thirds of the returns in.  Usually a race is long-called by then.  But the urban areas -- or what passes for them in the Cotton State; Birmingham, Huntsville, Montgomery, Selma, Tuscaloosa -- were counting more slowly, and Jones was overperforming in Trump country.

Voters in Alabama’s cities and most affluent suburbs overwhelmingly rejected Moore’s candidacy, an ominous sign for Republicans on the ballot next year in upscale districts. In Jefferson County, which includes Birmingham and some of the state’s wealthiest enclaves, Jones [...] captured more than 68 percent of the vote. And in Madison County, home to Huntsville and a large NASA facility, Mr. Jones won 57 percent of the vote.

While these Alabamians, many of them women, may have been appalled by the claims of sexual misconduct against Moore, results like these were not isolated to this race. They mirrored returns in last month’s statewide and legislative races in Virginia, a state filled with well-heeled suburbanites.

These highly educated and high-income voters, while often open to supporting Republicans, are uneasy with the hard-edged politics of President Trump and part of the reason his approval ratings are so dismal. If Republican candidates facing well-off voters next year do not find a way to separate themselves from the president, they will face a punishing midterm election next year.


I reject the premise that suburban (aka white) women rescued the Democrat. 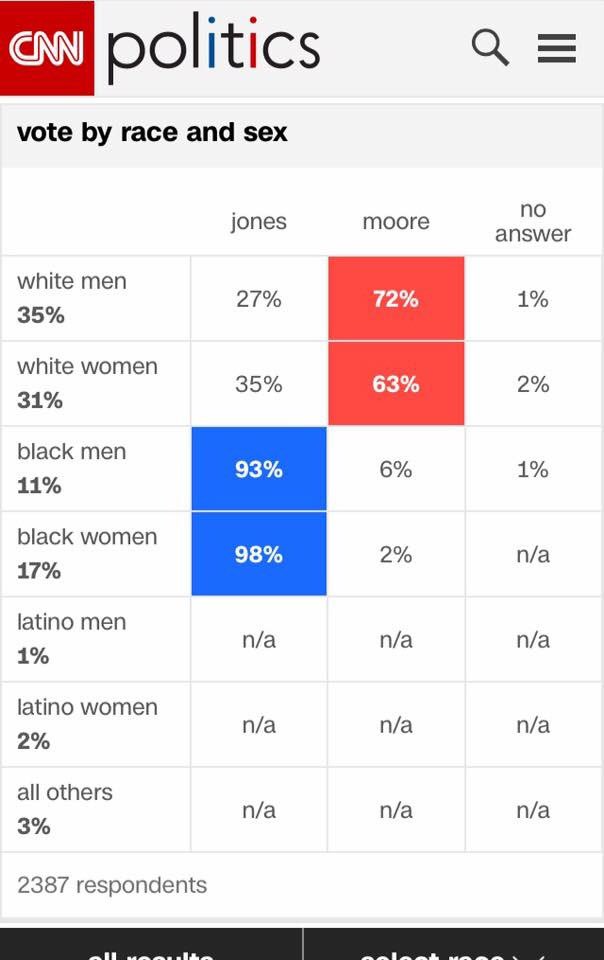 Democrats struggled for years under President Barack Obama to turn out African-American voters in off-year elections. For Jones, robust black turnout was essential to victory. He poured resources into African-American outreach and even summoned political leaders from out of state, including Senator Cory Booker of New Jersey and Deval Patrick, the former Massachusetts governor, to help in the race’s final days.

Black voters turned out in force, handing Jones a decisive lead in Alabama’s cities and predominantly black rural counties. (Again in) Jefferson County, home to Birmingham and its whiter suburbs, turnout exceeded the 2014 governor’s race by about 30 percent, and Jones nearly matched Hillary Clinton’s vote total there. Other populous, heavily African-American counties, including Montgomery and Dallas County, where Selma is, also exceeded their 2014 turnout.

Following last month’s elections in Virginia and New Jersey, when African-Americans helped vault Democrats to victories, the Alabama race is another sign that the party’s most loyal voters are fired up. 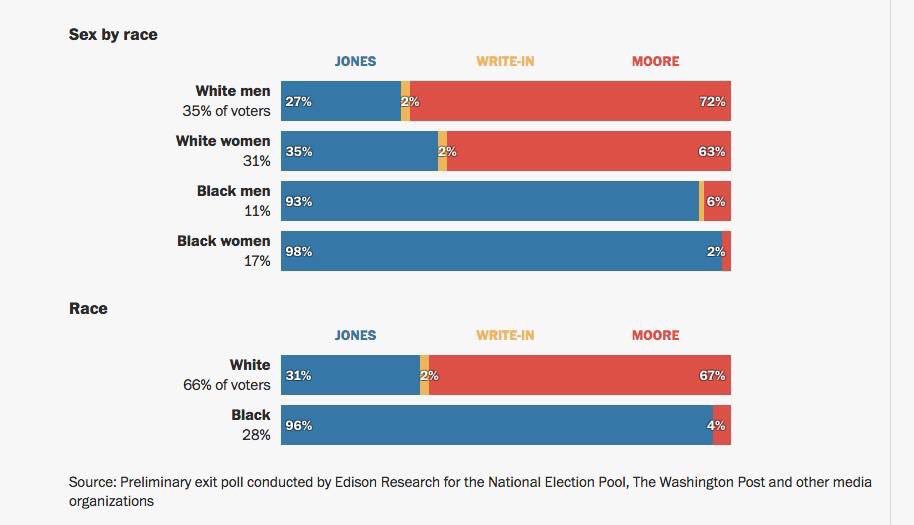 
So are there any lessons to be learned for Texas Democrats?  Oh, perhaps 'motivate the minority vote' (in our case, both blacks and Latin@s).  I would add 'stop reflexively blaming people who won't vote for Coke or Pepsi', like this moron:


There's a 5,000 vote margin & 15,000 write in votes. Can all you third parties /write ins stop ruining every election for me? #AlabamaSenateElection pic.twitter.com/6SwMEmBos2
— Matt Krackenberger (@matthewkrack) December 13, 2017


Most of those write-ins helped Jones, because they were Republicans who couldn't vote for Moore, but couldn't vote for a Democrat either.  Most importantly, Democrats might heed the words of Charles Barkley from last night.

"They've taken the black vote and the poor vote for granted for a long time. It's time for Democrats to get off their asses... This is a wake up call for Democrats to do better for black people and poor white people."


Here's something Jones, and every other Democrat I can think of, can start reforming immediately. For his part, Jones is pretty good but not great on the issues (he supports fewer regulations and a tax cut for businesses, and is mostly using the non-specific verbiage I find increasingly annoying: 'living wage' and 'healthcare a human right' without further detail.  He'll also have plenty of opportunities to demonstrate the degree to which he is "willing to reach across the aisle" *retch* over the course of the next two years.

A key part of Jones’ strategy in the past few weeks is to make clear to Alabama voters that he is willing to reach across the aisle and work with Republicans, said Jones campaign chairman Giles Perkins.

"I think a lot of the voters ... are interested in a guy like Doug that's willing to reach across the aisle and work with anybody that's got good ideas, and some of these ads communicate that," Perkins said.


That Politico link reveals that in addition to his other troubles, Moore was buried under an avalanche of teevee ads by Jones; something all the establishment politicos, consultants, and their sycophants will point to as a 'key to victory', reinforcing the current corrupt model.  As for his evaluation period, Jones is serving out the remainder of AG Jeff Sessions' term, and will have to defend the seat in 2020 (scroll to the bottom of this link, while noting the peculiar law in Alabama about how write-in votes are counted a week after election day).

What's going to be the most fun is watching the establishment Republicans and the Roypublicans tear each other to pieces.  This is the fight we have all been waiting for.

Immediately after Jones’s victory, establishment-aligned Republicans in Washington were assailing Moore and Stephen K. Bannon, President Trump’s former chief strategist, as having handed a Senate seat in the reddest of red states to the Democrats.

“Not only did Steve Bannon cost us a critical Senate seat in one of the most Republican states in the country, but he also dragged the president of the United States into his fiasco,” said Steven Law, who runs a super PAC controlled by Senator Mitch McConnell of Kentucky, the majority leader.

But Moore’s allies placed the blame for the loss on McConnell, who withdrew his support after the allegations first emerged that Moore had pursued teenage girls sexually or romantically.

“They colluded with the Democrats to undermine a pro-Trump candidate like Judge Moore just like they are going to try to do that in 2018 to myself and other pro-Trump candidates,” said Corey Stewart, who is challenging Senator Tim Kaine of Virginia and attended Moore’s election night party. “We’re going through a civil war in the Republican Party.”


Except there's no Abe Lincoln to save the Union this time.

Moore’s loss will only exacerbate tensions between Senate leaders and the party’s grass-roots and will probably play out in a series of House and Senate primaries in 2018. And if Republicans continue to nominate candidates who are too controversial to win general elections, the party’s internal divisions may cost them control of Congress.


From the New York Times' lips to the Flying Spaghetti Monster's ears.  Keep an eye out to see how many Lone Star GOPedophiles -- like Greg Abbott, to name one -- overplay their hand reaching out to the Jade Helm/Bathroom Bill/Trump Train Caucus in Texas.  Forcing the RPT statewides to pick a side in the Trump-or-sanity sweepstakes, as a campaign tactic, will go a long way toward helping a few Texas Democrats' chances in 2018.
Posted by PDiddie at Wednesday, December 13, 2017

Speaking of, per the end of your piece, where's Speaker Straus with his comment that he would still be involved with Texas Republican politics in some way, even as Abbott gives his official blessing to candidates?

He's got ten million bucks and three months. He'll be involved in some way. To what extent? We'll hide and watch.