Democrats also squabble about their debates 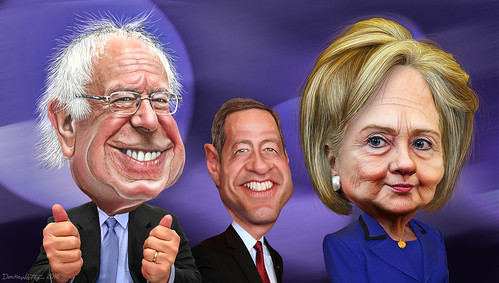 Two days ago the Manchester (NH) Union Leader, the newspaper of record in the Granite State, got together with MSNBC and scheduled a "unsanctioned" (not approved by the DNC) Democratic candidates debate, to be held on February 4 and moderated by Rachel Maddow and Chuck Todd. That prompted Hillary Clinton and Martin O'Malley to say yes, and Bernie Sanders to say no, rationalizing...

“DNC has said this would be an unsanctioned debate so we would not want to jeopardize our ability to participate in future debates,” Sanders campaign manager Jeff Weaver told the AP.

“We have no plans to sanction any further debates before the upcoming First in the Nation caucuses and primary, but will reconvene with our campaigns after those two contests to review our schedule,” she said in a statement.


Late yesterday, Sanders made a counter-offer.

Sanders’ campaign released a statement late Wednesday calling for additional debates in the Democratic primary, but with specific provisions.

They want one each in March, April and May. All three must not be scheduled on a Friday, Saturday or holiday, and all three must include Martin O’Malley as well as Sanders and Clinton.

“If the Clinton campaign will commit to this schedule, we would ask the DNC to arrange a debate in New Hampshire on Feb. 4,” the Sanders campaign’s statement said. It noted that Sanders has called for more debates since the beginning of the race, and accused Clinton of wanting few.

Sanders’ campaign said Clinton now wants more debates because “the dynamics of the race have changed and Sen. Sanders has significant momentum.

“Sen. Sanders is happy to have more debates but we are not going to schedule them on an ad hoc basis at the whim of the Clinton campaign.”


No response yet from Deb.  More from The New Civil Rights Project on this development.  Martin O'Malley saw an opening and took a shot.

Martin O'Malley is pissed at Bernie Sanders. With the Democrats on track to add a new debate for their presidential candidates between Iowa and New Hampshire, the long-shot candidate ripped into Sanders (who has yet to agree to this debate, while Hillary Clinton has) with an odd charge. He claimed that Sanders' public calls over the summer for additional debates had been "totally disingenuous" and that Sanders had privately worked against more face-offs being added to the lineup. "Bernie Sanders didn't want any more debates, from the beginning," O'Malley said following an event in Grinnell, Iowa, on Wednesday night.

Speaking with reporters from Mother Jones and MSNBC, O'Malley seemed to fault Sanders more than Clinton for the limited number of debates on the Democratic side. The number of debates was set by the Democratic Party, and the rules it established prohibited candidates from participating in debates that were not sanctioned by the Democratic National Committee. O'Malley claims that, once these rules were announced, his campaign reached out to the Sanders camp seeking their support in pushing for more debates. But, O'Malley says, Sanders declined. "We knew as soon as those rigged rules came down, we knew that if [Sanders] would agree to do more debates, we would have more debates, but he would never agree," O'Malley said. "He didn't want more debates." O'Malley's charge, however, is a bit hard to square with Sanders' actions at the time. The Vermont senator was in fact sending letters to the DNC and posting petitions to his website rallying supporters behind more debates.


Because it's MO'M, nobody's paying attention.  I feel bad for the guy that even his temper tantrums are under the radar.  I'm figuring that the next time I blog about him, it's that he's dropping out.  Less than a week from now.

MOM (let's get rid of the apostrophe) of course ignores last month's DNC server glitch and the lockdown on Sanders by Dancing With the Schultz, of course. Sanders has legitimate worries. Besides, he originally said he was OK with this debate — if the DNC was.