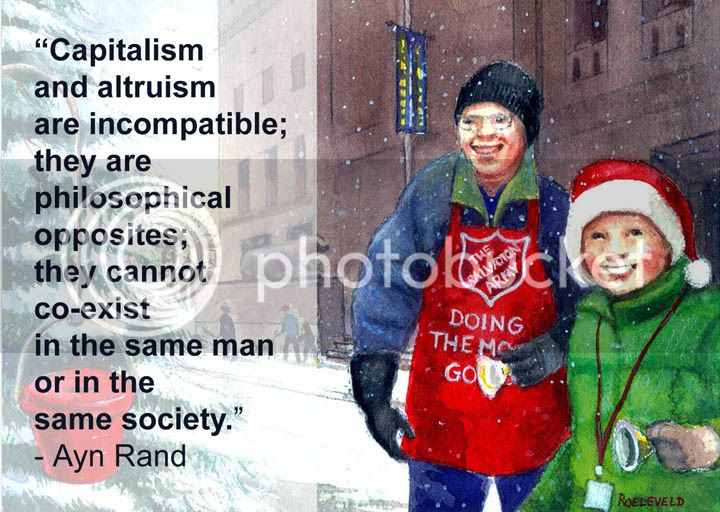 Twenty more, if you can stomach them.  Too late as a season's greeting for all my Republican friends this year, but next year...

The conservo-libertarian goddess also has some reviews of family movies.

“101 Dalmatians”
A wealthy woman attempts to do her impoverished school friend Anita a favor by purchasing some of her many dogs and putting them to sensible use. Her generosity is repulsed at every turn, and Anita foolishly and irresponsibly begins acquiring even more animals, none of which are used to make a practical winter coat. Altruism is pointless. So are dogs. A cat is a far more sensible pet. A cat is objectively valuable. —No stars.

“Snow White and the Seven Dwarfs”
An industrious young woman neglects to charge for her housekeeping services and is rightly exploited for her naïveté. She dies without ever having sought her own happiness as the highest moral aim. I did not finish watching this movie, finding it impossible to sympathize with the main character. —No stars.

“Willy Wonka & the Chocolate Factory”
An excellent movie. The obviously unfit individuals are winnowed out through a series of entrepreneurial tests and, in the end, an enterprising young boy receives a factory. I believe more movies should be made about enterprising young boys who are given factories. —Three and a half stars. (Half a star off for the grandparents, who are sponging off the labor of Charlie and his mother. If Grandpa Joe can dance, Grandpa Joe can work.)

More seriously, Night at the Museum 3 is a decent holiday movie. Pretty well wraps up loose ends from the first two... a farewell to Robin Williams (and Mickey Rooney) to boot.