The gasps turned into shrieks

Conservative extremism is still death-rattling; it's just doing so a little louder than before. This was the scene yesterday in front of City Hall at lunchtime, just before council members convened to move forward on Houston's equal rights legislation. 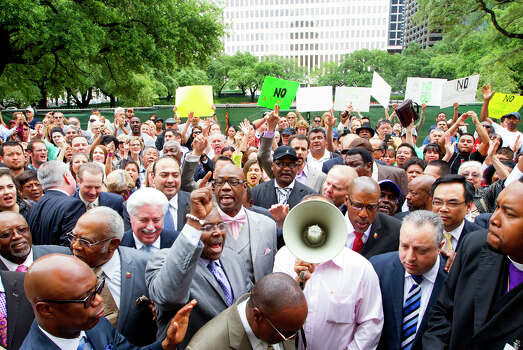 Mayor Annise Parker and supporters of her proposed nondiscrimination ordinance announced a compromise Tuesday in hopes of deflecting controversy over a small provision that had dominated discussion on the measure.

A paragraph specifying that no business open to the public could deny a transgender person entry to the restroom consistent with his or her gender identity had outraged conservatives. Church and Republican political leaders have used the clause to claim the ordinance "provides an opportunity for sexual predators to have access to our families."


This 'sexual predator' bullshit is a transmogrification of the Xtianist, homophobic paranoia associated with conservatives having to potentially share a urinal or a stall with a TP (not a Tea Partier).  That and swastika cakes dominated the anti-HERO message before city council yesterday, and well into the night.

There may be some wavering, quivering CMs after yesterday's show of force by the local Talibaptists -- in which case you can shore up support by calling or e-mailing yours here, this morning -- but I expect this little fire to die out shortly after the vote is taken.

One more thing: the white face to the left of the bullhorn in the photo above -- white hair, grinning -- is that of Harris County Clerk Stan Stanart.  The man who cannot get the county's votes properly counted.  The same man who cannot tally the county's early votes and post them to the website on time, as his predecessor was consistently able to do, is out of the office at a hate rally.

Please remember the name of his worthy challenger, Ann Harris Bennett, in November.

Update: Kuff has a good roundup of developments that include protests from the various caucuses within the Immoral Minority.

Update II: Postponed for two weeks.  Like others, I believe that justice delayed is justice denied.
Posted by PDiddie at Wednesday, May 14, 2014

Well, here we go again. I have never heard of this R. J. Ballard, but this is a very professional operation. He is picking up with Mail Chimp where Bethel Nathan left off.

As Charles Kuffner deduced, it looks like whoever is funding this operation acquired a property on West 34th right off 290. It looks like Dave Wilson’s place.

The location is ideal for going after a segment of the black vote that has been systematically alienated from the Democratic Party by trickle-down professional and racial patronage. There are parallel operations targeting the same non-racial demographic only muddled together by the “Hispanic” or “Latino” tag or lost in the useless “Asian” fog.

It is easy to push 'family values' and fear of 'sexual predators' across race lines and, thereby, to target young, working families who are not benefitting from the left-wing of American plutocracy: Social Liberals + Economic Conservatives. That austerian targeting remains rooted in financial privilege and economic discrimination expressed as identity politics. Historically, this had failed by 1994 as “blue collar” and “white (Reagan Democrat) resentment” routed our “inclusive” (centrist) “grievance-mongering” office-squatters.

Democrats are still stuck deep in that legalistic black hole while the right in Texas increasingly deploys Dave Carney’s innovative “knock-knock” technology. As Elizabeth Warren pointed out, the reason we are stuck is because the party insiders suppress all criticism of their lack of proficiency and intransigent resistance to anything but “the way we’ve always done it!”

This faux-populist GOP response to Demographic destiny will include a moderate pivot this summer targeting women. That was all dramatically effective in 2010 and measurably so in 2012, despite Romney’s failure to make the pivot. I expect results to come in somewhere in-between 2010-12 this year.

More outrage at particular grievances – “pink noise” -- has not proven to be an effective counter-strategy in Texas.

Robust support for traditional political equality and tangible economic democracy -- a genuinely populist stance -- would be more effective. But that will stay off the table in Texas so as long as the post-2003 party regime in Washington and Austin keep a death grip on state and county parties.

We are really back to pre-2008 in the regular party and emulating “battleground” stuff that did not turn Ohio or Colorado blue -- despite harvesting Electoral College votes.

As I say, here we go again. Incidentally, if Boykins, Bradford, or Davis break ranks with other Democrats on City Council, the judicial candidates will panic and rout.

Somehow, my office email is on the Houston Pastors' Alliance, or whatever the hell it's called, list, so I get to read about some of these maneuverings down there.

Dropping the transgender bathroom provision was smart politically. Some gays and lesbians aren't too comfortable on trans issues, for that matter. I'll admit I'm not totally so.

At the same time, I've been to Europe and taken a pee or two in a unisex bathroom before, so it's really not a big deal.