Greg Abbott showing up on milk cartons, but nowhere else

Thanks to John Coby for that. And the Lone Star Project for this. 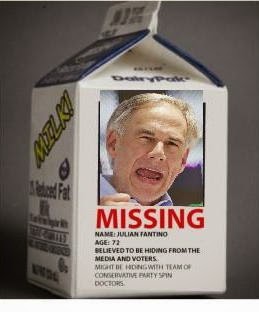 Why is Greg Abbott avoiding the media and canceling appearances?

Every campaign has occasional scheduling problems. Sometimes events or appearances have to be cancelled for a variety of legitimate reasons.

But over the last several weeks, Greg Abbott has cancelled a number of events and has rarely taken press questions at the events he does attend. Clearly something is going on inside the Abbott campaign that’s affecting his willingness to appear in public or personally answer questions from the press.

-- Abbott has refused to meet with editorial boards both during and since the Texas primary.

-- Abbott spent more than three weeks (March 6 – 29) without any public events.
During this period (March 9 – 24) he refused to personally answer any questions on equal pay, even questions regarding salaries within his own AG office.

-- Abbott canceled an April 4th scheduled and publicized address to the Texas Renewal Project, an organization of Christian pastors (I posted about this conference here).

-- Abbott’s campaign scheduled an April 7th press conference and Abbott simply failed to appear, not even bothering to send the press a cancellation notice.

It would be easy to imply, and reasonable to assume, that Abbott's campaign is wilting under pressure – especially the ongoing bad press over his bungling of the equal pay issue and his disastrous education policy rollout.

If it is something else – campaign personnel changes, pressing official business or a family issue – then Abbott needs to be forthright and explain in some detail.

If something is seriously wrong, Greg Abbott should say so, and everyone will know what to expect going forward.


Greg Abbott is running a Steve Stockman-styled campaign at this point.  And we all know how well that turned out for Stockman.  Abbott came out of his self-imposed lockdown long enough to challenge Wendy Davis to appear in Austin today at the Civil Rights Summit with Obama.  She's going to be there.

So where is Greg Abbott hiding?  And more importantly... why is he hiding?  I mean, we all know what he is hiding (his association with undesirable supporters and the poor judgment it reflects).  But why is he afraid to be asked about it?  Why won't he stand up for what he believes?

Oops, sorry. That was insensitive.
Posted by PDiddie at Thursday, April 10, 2014