After I posted the list of Texas Green Party candidates running for office next year, I had a query from Charles in the comments here -- and saw this post of Ted's -- questioning the rationale of former Houston mayoral candidate Don Cook running for US Representative in CD-13, a west Texas district that includes Lubbock and Amarillo.  I reached out to Cook and received the following reply from him (with minor edits for style and brevity)...

1) The narrow political agenda:  As always, I want to promote the party that is out to save, or at least help maximally, humanity.  What this means to me, from where I am in Texas, is maximizing the GP's electoral presence in Texas.  I intend to mainly help other candidates, but since we have ballot access in Texas I wanted to add one more candidacy to the list.  Seeing that all our stay-on-the-ballot bases were otherwise covered, but fearing (without cause it turns out) that we might actually fall short of our record breaking numbers in the previous cycle of county, state, and federal elections, I was looking for the right office for me.

2) The personal comfort zone:  I found the mayoral race in Houston this year rather exhausting, financially expensive, and humbling -- not to mention the stress on my family life -- for the miniscule (which is to say virtually nonexistent) rewards.  Monetary obligations at this point are not great, but they are still not totally resolved.  I wanted a low maintenance race.  If you are just going to be a name on a ballot, nothing is more low maintenance than a Congressional race.  One doesn't have to live in the district to run; one must only relocate if one wins, so one can file for any Congressional seat in the state.  You don't have to file any campaign finance reports until you raise over $5,000, and I don't plan on raising any money.

a. I won't say 13 is a lucky number for me -- earlier this month, on Friday the 13th, I fell off a treadmill and knocked a cap off one of my front teeth -- but the superstitious part of me seems to expect and enjoy challenge from the number.

b. Wikipedia described CD-13 as the most conservative congressional district in Texas.  It occurred to me that the Dems might not have a candidate, and that maybe I could get a boost from being the only liberal-progressive-radical on the ballot in that race.  Unfortunately there is a Democrat running.  So it goes.  If some other Green had wanted that race, I would have as gladly sought another.

a. No other Greens were running for it

b. It is in a part of Texas where the GP is thin.  Voters in those counties will see one more GP candidate on the ballot than they would have had I not declared.

c. It is too far away for me to consider door-to-door campaigning or expect any debate invitations.

d. I and others are considering comedy and other performance material to promote the GP in the coming year, and this could be a source of material. "Hi, I'm Don Cook and I'm the Green Party candidate for Texas Congressional District 13, in northwest Texas because it turns out you don't have to live in a congressional district to be elected to represent it..."

e. I can make the case that since you don't even have to live in the district you represent when you run for Congress, we should go a step further: eliminating all Congressional districts and, using a single transferable vote in the multi-seat or proportional representation model, allow all the voters across the state to vote for all 36 seats.  (Winners only need 1/36th of the vote plus one vote to win!)

5) If my fellow Greens are appalled by my action, they have only to vote for "None of the above" rather than me at the nominating convention, and I will not get the party nomination.


Many Democrats and Republicans over the years have run for Congress while living outside the boundaries of the district which they chose to seek... though typically they do so in districts closer together than those which represent Houston and Amarillo/Lubbock.  Here's just one recent example (click to enlarge). 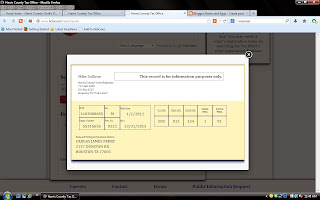 The "carpet-bagger" argument against this sort of thing is only slightly less effective in election seasons following redistricting, especially in 2012, when district maps underwent several court challenges and revisions.  The final result so confused Mr. Cargas (above) that he advocated for the Texas Medical Center -- in neither CD-7 where he was running nor CD-2 where he resides, but CD-9 -- in his meeting with the editorial board of the Houston Chronicle, a comedy-of-errors circumstance I detailed in this post.

But I'll stop making a piñata of Cargas for now -- he will present plenty of opportunities to do so later on, after all --  and wait for the inevitable tsk-tsking of Cook's filing from others, mostly in the blogosphere, to apend here later.

I can appreciate the case Cook makes: that it is absurd not to require someone running for Congress to live in the district they seek to represent.  It goes without saying that Cook is an unconventional candidate running for office in a political party that gets mostly overlooked by mainstream media outlets across the state.  If all that is left for him to do in order to call attention to himself is things like bridge blogging and skits, then he seems well-seasoned to endure the ridicule of the conventional "wisdom".

God forbid the corporate media write anything about Green Party candidates or races; the Texas Tribune (yes, corporate media) still hasn't updated their brackets with all of the Greens' statewide candidates.

So anything beyond the historical response -- ignoring alternative parties, races, and candidates, in other words -- probably qualifies as progress.
Posted by PDiddie at Monday, December 30, 2013

I would be in favor of electing part of our representatives off a "national list" similar to what Germany does for the entire Bundestag, so I get where Cook is coming from, and within our own constitution, I accept it.

Thanks for the update.

I'm gonna sorta agree with Gadfly for once. The Constitution does not even require that a state divide itself into districts -- it would be constitutionally acceptable for a state to elect all of its members of the House at-large if the people so desired. Districts, however, are customary -- but since the Founders came from a British tradition where members of the House of Commons were not (and still are not) required to live in their districts, there was never a question of requiring more than residence in the state.

Besides, CD36 currently has a Congressman who does not live within the boundaries of its district.