The Chron catches up with the SD-6 special, just in time for early voting (beginning tomorrow).

With eight candidates in the race in an overwhelmingly Democratic district that includes Houston's East End, the race is likely to come down to a battle between two prominent Democrats, state Rep. Carol Alvarado, whose House district overlaps much of the Senate district, and former Harris County Commissioner Sylvia Garcia.

If a runoff is needed - and with so many candidates, one is likely - it will be held between Feb. 23 and March 9, with Gov. Rick Perry scheduling the exact date.


Apparently Reyes is a Democrat after all, despite keeping that a secret on both his filing application and his website. The Chron's teaser headline on their home page prominently notes Delgado's former occupation. That really is cheesy of the newspaper of record. And judging by the posts from the Khronically Konservative Komment brigade, they took the bait the Chronic was chumming.

Mark Jones at Rice weighed in with his usual nothing.

The race features "a modest activist-versus-establishment dynamic, with activists leaning toward Garcia and the establishment toward Alvarado," said Rice University political scientist Mark Jones. "The pattern is not, however, clear-cut, with many establishment Democrats supporting Garcia and many activists backing Alvarado."


Thanks for clearing that up. The only real news in this entire article is this:

Among the state's 31 senate districts, this predominantly Hispanic district ranks last in the number of registered voters (284,000) and in 2012 voter turnout (138,000). Jones estimates that fewer than 1 in 10 registered voters and 1 in 25 district residents will cast a ballot.


So if Jones is correct, 28,400 +/- votes in total will decide the primary. Garcia, the presumptive front-runner, declared early on her intention to avoid a runoff; she said as much at the bloggers' luncheon she hosted a few weeks ago. So, by extrapolating... she needs 14,201 votes to accomplish that. (See, I can do math.)

She has certainly put a lot of feet in the street since this all started in early December, so that could happen. I just don't think it will. The other four Dems, the Green, and the two Republicans -- one of which got 29% two months ago against Gallegos -- only need to get the same 50% +1 to deny Garcia the outright victory. Twenty-nine percent has been the conservative base vote in the district for the past two cycles in which Gallegos stood for re-election. 2008 and 2012 were both high Democratic turnout years. Again, using Jones' projection... that works out to 8,236 Republican votes.

I'm still betting the runoff is going to be between Garcia and Bray.

Selva, for her part, will make Keystone XL a campaign issue. From yesterday's press release...

The Keystone XL Pipeline public-relations campaign is sheer misinformation. Keystone XL proponents claim it will lower gasoline prices. In fact, its economic model will hike Canadian oil prices at the expense of American gasoline consumers. Anthony Swift, author of the Natural Resources Defense Council report (http://www.nrdc.org/energy/files/kxlsecurity.pdf), states that when TransCanada proposed the Keystone pipeline, they set it up to increase oil prices in the United States, thereby increasing profit for Canadian producers when they send their product to the USA. The pipeline would take Canadian oil normally destined for Midwest refineries—which produce gasoline for US use—and instead send it to Gulf Coast refineries for eventual export since it yields more profits abroad.

I support energy independence for the USA. We will not achieve it by building pipelines that offer us nothing but risk while we route North American oil to overseas markets. There is no employment benefit for Houston in the Keystone pipeline. Supporters refer the the pipeline as a potential ‘job creator.’ The glowing job projections for the pipeline are overblown. The Cornell University Global Labor Institute studied the issue, and they concluded, “…the job estimates put forward by TransCanada are unsubstantiated and the project will not only create fewer jobs than industry states, but that the project could actually kill more jobs than it creates.”


About the same time that was hitting inboxes, the Tar Sands Blockade protest at the Houston offices of TransCanada was under way. 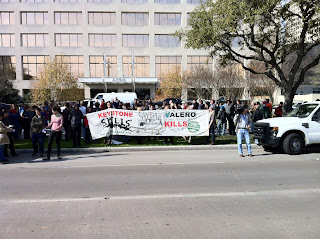 Here's the live blogging from yesterday, including video and pictures from other direct actions around the country.

You probably won't see much corporate media coverage of the protests against KXL. The HouChron can barely be bothered to cover the special election, so don't expect their corporate overlords to do much more than this. This report from the NYT was the welcome and notable exception.

The development of Alberta’s oil sands has increased levels of cancer-causing compounds in surrounding lakes well beyond natural levels, Canadian researchers reported in a study released on Monday. And they said the contamination covered a wider area than had previously been believed.

For the study, financed by the Canadian government, the researchers set out to develop a historical record of the contamination, analyzing sediment dating back about 50 years from six small and shallow lakes north of Fort McMurray, Alberta, the center of the oil sands industry. Layers of the sediment were tested for deposits of polycyclic aromatic hydrocarbons, or PAHs, groups of chemicals associated with oil that in many cases have been found to cause cancer in humans after long-term exposure.


We will just have to wait and see if the issue resonates with the voters in SD-6.

Previous posts on the special election:

No Noriega(s) for SD-6 *with updates

Update (1/13): "While solidarity actions were happening at the offices of TransCanada and its investors and contractors around the country, over a hundred blockaders took over the lobbies of two different TransCanada offices in Houston."