The legal and moral justification for homophobia

As related to us by the Scalias, Antonin and his son Paul. First, the father...

Now that the Supreme Court will be weighing in on the issue of same-sex marriage, the Justices’ biases on the basic principles of sexual orientation are under scrutiny — none perhaps moreso than Justice Antonin Scalia. Recently, he defended his comparison between homosexuality and murder, arguing simply that either can be morally condemned. He obtusely couldn’t understand why the gay Princeton student who asked the question wasn’t convinced by his response.


More on this exchange.

The quotations from Scalia opinions that so dismayed  Princeton freshman Duncan Hosie all referred to homosexual conduct. For example, in a 1996 case the majority of the court held that voters in Colorado had exhibited “animus” toward gays by making it impossible for the state or municipalities to pass laws protecting them from discrimination. Scalia responded: “I had thought that one could consider certain conduct reprehensible — murder, for example, or polygamy, or cruelty to animals — and could exhibit even 'animus' toward such conduct."   In his dissent Scalia did refer to “homosexuals” (he assiduously avoided the word “gay” except in quoted material), but he used that term interchangeably with “those who engage in homosexual conduct.”

And what of the notion of "sexual orientation"? Scalia did acknowledge in his Colorado opinion that such a thing might exist. For example, he wrote that it was permissible for states to criminalize homosexual conduct  (as it was in 1996) "surely it is rational to deny special favor and protection to those with a self avowed tendency or desire to engage in the conduct. In the next sentence he suggests that "'homosexual-orientation' is an acceptable stand-in for homosexual conduct." 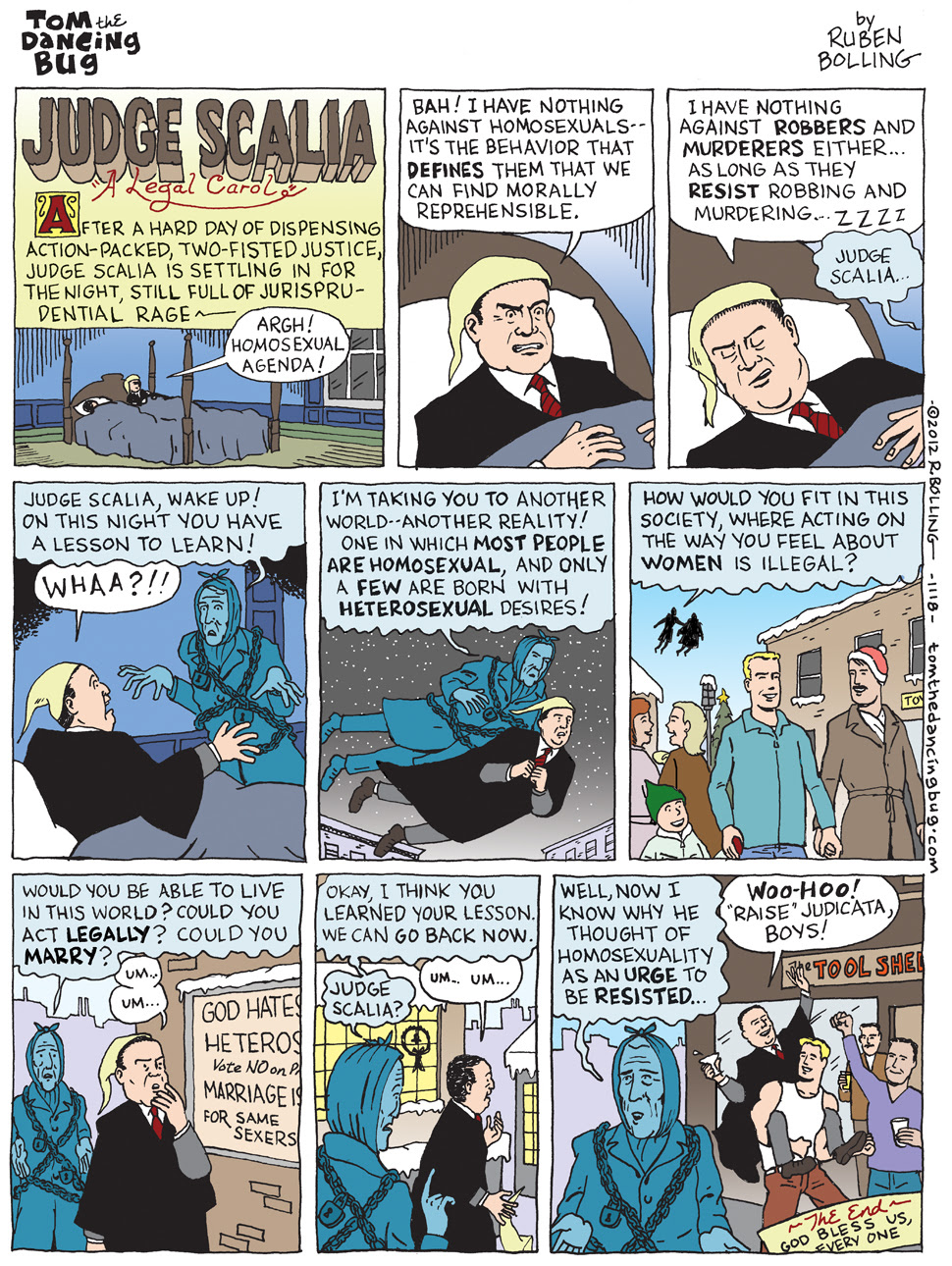 And now the son.

Insights into Scalia’s understanding of homosexuality (or lack thereof) can perhaps be found through his son, Rev. Paul Scalia, a Catholic priest in Arlington, Virginia. The younger Scalia has worked with the Church’s Courage ministry, which promotes “chastity” for gay Catholics using principles from ex-gay therapy. He has also spoken openly on the topic, and though he’s proven quite capable of reiterating the Church’s anti-gay teachings, a 2005 article reveals just how distorted the family’s view on homosexuality may be.


You need to go on over there, or you can click this link. Once you have taken in as much of that as you can stomach, continue here.

Contrast  the Scalias’ approach to this passage in Justice Anthony Kennedy’s majority opinion in the 2003 case of Lawrence vs. Texas, which overturned a Texas law against same-sex sodomy. Kennedy wrote:  “The case does involve two adults who, with full and mutual consent from each other, engaged in sexual practices common to a homosexual lifestyle. The petitioners are entitled to respect for their private lives. The state cannot demean their existence or control their destiny by making their private sexual conduct a crime.” Some gay activists blanched at Kennedy’s use of the term “homosexual lifestyle,” but applauded his larger point: that what was at issue was the lives of gays and lesbians, not isolated sexual acts.

Scalia dissented in that case, too, arguing that Texas’ sodomy law “seeks to further the belief of its citizens that certain forms of sexual behavior are 'immoral and unacceptable' — the same interest furthered by criminal laws against fornication, bigamy, adultery, adult incest, bestiality, and obscenity."

The conventional interpretation of  Scalia’s opinions in gay-rights cases is that he doesn’t like gays; but maybe the more accurate gloss is that he doesn’t believe they exist -- except when they are engaging in (or thinking about) "immoral and unacceptable" sexual acts.


And then finish at the original with this.

For the Scalias, moral condemnation of homosexuality is just assumed, and the consequences of that judgment are par for the course. The consequences of family rejection for LGBT youth have been thoroughly documented, but for these men, rejecting “homosexual inclination” takes priority. Rev. Scalia relies on genetic uncertainty to conclude that homosexuality is not a “fixed, inborn orientation,” even though science does not doubt that is exactly how sexual orientation presents, regardless of its causes. He seeks to reject people for something that is wholly part of who they are and how they will lead their lives, ignoring that such an approach unquestioningly deprives them of life’s most basic sources of happiness and support: a loving partner and the opportunity to raise a family.

The phenomenon of “coming out” only exists because a culture that shuns homosexuality has demanded gay invisibility. The concept of “gay pride” came about not as flamboyant flaunting, but to counter the expectation of “gay shame.” These unique aspects to gay identities reflect the consequences of condemnation, not an impetus for them. Moral condemnation is not inherent; in the court of law, it must be justified beyond tradition and religious belief. Unfortunately, it seems Justice Scalia is not interested in such intellectual justice.


So by my reading, homosexuality -- according to the Scalias -- is an 'urge', i.e. a choice; since it is a sin against God's law it is also a sin against man's; and no serious thinker can disagree with that. (It is worth noting that no less serious a thinker than Gore Vidal advanced a similar premise, albeit without the moral judgment.)

These religious interpretations, followed by constructing premises based upon the foundation of conservative Christian values -- dogma, in other words -- is what leads to less serious thinkers saying things like "Life is God's gift to women, and so by extension is a fertilized egg as byproduct of rape or incest."

When science is dismissed in favor of faith, the rationale for any argument collapses. But the comforting fallback for those less serious thinking folks is always some version of 'what does the Bible say'. This makes as much sense to me as watching one television news network, one which only reinforces your prevailing point of view, never engaging one in critical thinking, never prompting a question as to whether the thoughts involved might be misguided.

The very definition and practice of ignorance (and a few other things).
Posted by PDiddie at Sunday, December 23, 2012

This topic - especially as regards Justice Scalia - burns me up.

The Court's 1996 Colorado decision - which knocked down a voter initiative that treated gay folks differently than everyone else - seems to follow a rational course:

It violates the Equal Protection Clause to treat a group of people differently than everyone else without a good reason. The murderer comparison that Scalia likes so well fails because we give murderers full rights under the law until such time as they have been given Due Process and convicted of a crime.

In a country where the people retain all of the powers not specifically handed to government, what could possibly be the reason for treating a group of people differently here?

To keep those people from sinning?