The best party of the entire convention. 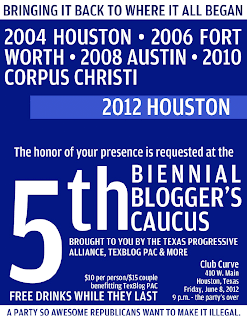 As part of a longer entertainment options post -- probably coming on Thursday morning -- let's begin by saying if you aren't brave enough to be driving around H-Town, then you need to be taking the light rail. You don't want to sit around the Hilton or the GRB all day and all night, trust me. This is the nation's fourth largest city and THE most culturally diverse. It's also still just a great big old Texas town with lots of interesting things to see and do. Get out and get around it, for Pete's sake.

Never mind the previous version of this post, and don't go to W. Main like it says on this flyer; Club Curve is 410 Main Street, directly across from the Preston Street train station (southbound). Here's the map:

From the Hilton Americas and the GRB, walk about six or seven blocks northwest, up Dallas Street, and then turn northeast (right) at Main and ride the train up one stop or just hoof it the remaining seven blocks. Or you can cab it. There might even be a pedi-cab if you're lucky. Parking downtown can be expensive and problematic so I would avoid that, especially if you're an out-of-towner.

Hope to see you there. I'm not a night owl any longer so don't show up at midnight expecting to meet the biggest, baddest asshole in the Texas progressive blogosphere.
Posted by PDiddie at Wednesday, June 06, 2012

"A party so awesome Republicans want to make it illegal."

I wouldn't dream of it. Your "Move to Amend," though, would allow for political parties to be banned.

And that's a bad thing in what way, Matt?

You think government should have the ability to ban political parties?

I just assumed that was an unintended consequence of Move to Amend.

You still haven't answered my question.

But to answer yours: banning only the Republicans would be a grand idea.

Only tyrants (or wannabe tyrants who are impotent at the moment) would try to seize that right from free people.