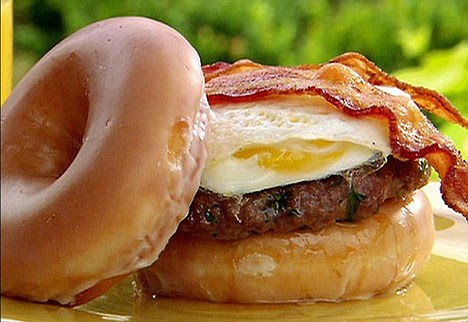 The celebrity chef famous for bacon and egg burgers with donuts as buns, deep fried bacon-wrapped macaroni and cheese balls, and more butter on all of it is a diabetic ... and has been for three years.

After becoming the face of diabetes-inducing cuisine, Food Network personality Paula Deen confirmed on Tuesday's Today show that she has known about having Type 2 diabetes for three years and used the occasion to start pitching diabetes drugs for Novo Nordisk. "I had to figure things out in my own head," Deen told Al Roker, explaining why she only decided to come clean about her metabolic disease now.

That's right; she waited until this week to announce it publicly ... the same time she announced her sponsorship with a Dutch pharmaceutical company ... whose product is one of the leading treatments for diabetes.

What's wrong with this picture?

Ed. note: Here's my full disclosure. I have been diabetic for eight years, have been taking Victoza for the past year, have lost 50 lbs. mostly as a result of the medication, and haven't taken a dime for anything related to my diabetes from Novo Nordisk or anyone else.

Deen made in the neighborhood of $10 million from her TV show, endorsements and sponsorships (brands such as Philadelphia Cream Cheese and Smithfield Ham) in 2010; consequently New York magazine estimates she earned as much as $30 million since diagnosis while she 'figured things out in her own head'.

There is no word on exactly how much Novo Nordisk is paying her to say she takes Victoza, but this source indicates it's seven figures. Deen is preaching a message of moderation now, though...

"People see me cooking all these wonderful, Southern, fattening recipes... it's for entertainment. People have to be responsible."

Ohhh that's what it's been all this time. Entertainment. Some reactions were harsh.

Hours after Deen broke the news, (Travel Channel's Anthony) Bourdain posted this message on Twitter: "Thinking of getting into the leg-breaking business, so I can profitably sell crutches later."

Other reactions were harsher still.

Paolo Lucchesi, the food columnist for Inside Scoop SF was frustrated "that there was not one modicum of regret or culpability for her entire persona and recipe encyclopedia, which is pretty much a butter-lubed bobsled ride to Diabetesville."

Deen has her libertarian 'personal responsibility' defenders, too.

But if Deen’s become rich showing Americans how to consume as much butterfat as possible, is that Deen’s fault? Last time I checked, cooking shows were entertainment -- what social critics call “aspirational” -- not the mandatory curriculum for home ec class. Obesity was a crisis in America long before Deen uttered her first “y’all” before a video camera. How many of Deen’s critics have also spoken out against the cream-enriched legacy of Julia Child, or James Beard -- a man of epic girth who cooked with butter and fistfuls of cheese, and who served as the moon-faced pitchman for Omaha Steaks?

John Birdsall at Chow takes it a step further, too, calling Bourdain's verbal assault not just hypocrisy but class war AND gender war.

Deen, we assume, speaks to a down-market audience who need to be lectured about nutrition and willpower. Bourdain speaks to the well-heeled traveler for whom a foie gras hot dog is an occasional indulgence, not a moral failing. Right? Or is it somehow acceptable for men to engage in extreme eating, while women have an obligation to show restraint?

Is there a moral to this story? Why, yes there is.

"Everything in moderation. Including moderation."
Posted by PDiddie at Thursday, January 19, 2012