Inspired by the Occupy Wall Street movement, and specifically the civil disobedience of Dr. Cornel West, Move To Amend is planning an action event today to mark the second anniversary of the infamous Citizens United v. FEC decision.

Occupy the Courts will be a one-day occupation of Federal courthouses across the country, including the U.S. Supreme Court in Washington D.C., on Friday, January 20, 2012.

Move to Amend volunteers across the USA will lead the charge on the judiciary which created — and continues to expand — corporate personhood rights. 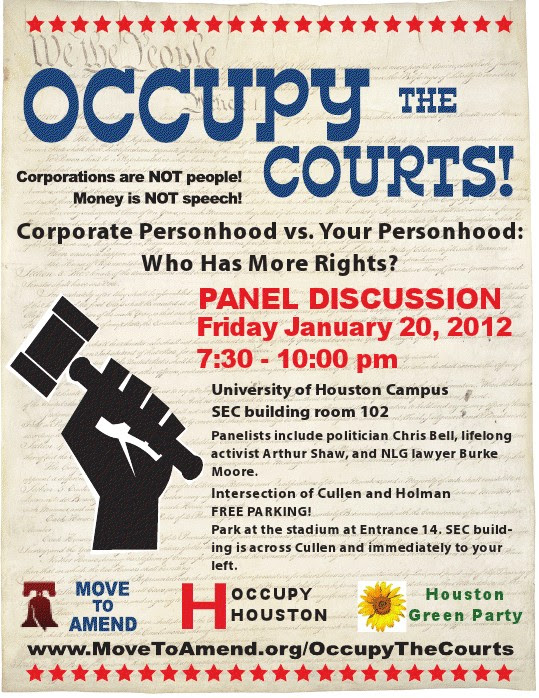 On Friday evening, January 20, join us for “Corporate Personhood vs. Your Personhood: Who Has More Rights?” This panel discussion commemorates the 2nd anniversary of Citizens United v. FEC, the latest in over a century of Supreme Court decisions establishing the doctrines that corporations are people and money is speech. Panelists include former Houston city councilman and former Congressman Chris Bell, activist Arthur Shaw, and NLG attorney Burke Moore.

7:30- 10 p.m., University of Houston main campus, SEC building room 102. Free parking off Cullen in the stadium lot, across from Entrance 14. Walk across the street into Entrance 14 and you’ll see the SEC building immediately to your left.

Does the Green Party have a right to set up events? Is the state prohibited under the constitution from raiding its offices without a warrant?

I think so. They think not, which is weird.