There's a Draft Noriega in here

Another member of Houston's distinguished Noriega family was beseeched today by several of your favorite blogs to take a run at John Cornyn. Since I'm going last, I get to sample everybody else. First, the Fort Bend County Democrats (via Hal):

We, the Fort Bend Democrats, as an organization, do hereby declare our support for State Representative Lt. Col. Rick Noriega to run for the United States Senate from Texas. We pledge our support – with our money, our time, and our manpower – to help Noriega win in November 2008.

I had the opportunity to speak with him at his wife Melissa's victory party Saturday night. I'm confident that with enough grassroots support, and funding, he will answer the call to run for Senate. He will run a great campaign, beat Mikal Watts despite his money and easily replace Box Turtle Cornyn in 2008.

No other announced or exploring candidate in the race has either Rick’s distinguished record of accomplishing things for the people of Texas or the ability to unify the Democratic base to take U.S. Senator John Cornyn on. We urge Rep. Noriega to seriously consider entering the race.

I think we will finally have a confluence of establishment and grassroots support at a statewide level with a Noriega candidacy. I believe people will get fired up about getting Rick Noriega elected. If nothing else, it's refreshing to see someone who isn't a same-old, same-old name as a standard-bearer. It feels like a changing of the guard, one that's long overdue. I think he can be a game-changer, someone who can alter politics in this state in a fundamental way, and in doing so alter Texas' image nationally. I'm told Harvey Kronberg expressed similar sentiments at the town hall meeting Ellen Cohen hosted last week; he apparently said this has been the talk of Austin as well. Who was the last statewide Democrat to generate that kind of buzz? Maybe Henry Cisneros, if you overlook the fact that he never ran a statewide race. It's about damn time.

Rep. Noriega is from Houston, and served recently as deputy garrison commander of the KMTC training facility in Kabul, Afghanistan as part of Operation Enduring Freedom. He also served as the Laredo Border Sector Commander for Operation Jump Start. During the previous legislative session, Rep. Noriega successfully passed an amendment to the state budget to raise teacher pay as much as the rules allowed. (Read more on Rep. Noriega's background here). Overall, we believe his work and his experience make him an interesting candidate, and one who should be in the race to replace John Cornyn.

It's not often I'll jump out for a candidate this far away from the primary. It's also somewhat rare that the Mayor and I will disagree on anything. However, I'm doing something a little unusual because I'm ready to make some waves and I'm ready for a candidate that will

BEAT THE SHIT OUT OF CORNYN.

IMHO, that guy is Rick Noriega. Now, if we can only get him to run...

And Eye on Williamson:

Noriega has literally fought for our freedom and exercised it in the Texas House of Representatives for the benefit of working families. Others have written at length about Noriega’s qualifications. The most important thing you need to know is that Rick Noriega has served this nation and this state with honor. We hope in the days to come you will learn more about him and agree that he has the strength of character and leadership to spark hope in the hearts of long-suffering Texas’ working-class voters.

And the Great Orange Satan:

DraftNoriega.com is alive and kicking, while Richard Morrison gave us all an introduction to Noriega a couple of months ago. If all goes well and this doesn't fizzle like Alabama, we'll be hearing a lot about this race.

But before I wrap up this post, I'll leave you guys with this: 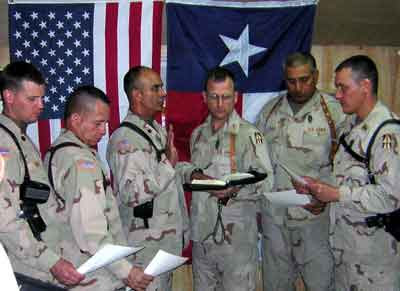 That's Major Rick Noriega with his right hand up. He was getting sworn in for his fourth term in the State House.

While serving in Afghanistan.

What could I possibly add to all that?

(Maybe a nasty post about Mikal Watts, but it can continue sitting in "draft" status for now. And maybe something to say later about the rumor that Chet Edwards is looking at making a run.)

Update (6/19): I should have added South Texas Chisme to the list above:

Rick Noriega stands out as a man ready for the job. He's already been called to public service as a National Guardsman in Afghanistan and a representative in the house. Rick is called again.