To say I have been remiss in reminding my six loyal readers, four of whom live in Houston, to vote for Melissa Noriega for Houston City Council is, as the title implies, an understatement.

So join me and Kuff and Stace at an early polling location today through June 12th to cast your vote for Houston's next exemplary councilwoman. 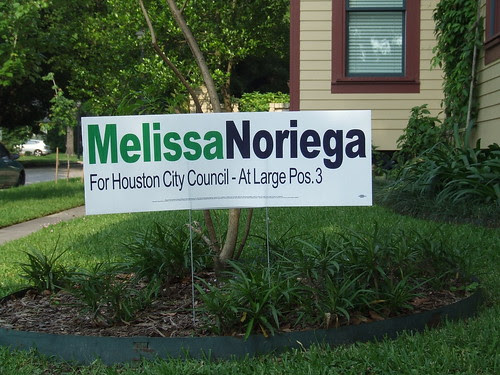 If you'd like to do more than just vote, contact the campaign office for phone lists to call voters. info@melissanoriega.com or 713-MELISSA (635-4772). They are easy calls to make, and they are to Democrats, so the reaction is usually "thanks for the reminder" or "I thought she already won!" They'll send a script along with the names.

Polling locations will be condensed to a greater degree on Election Day, June 16th from what they were on May 12th due to the anticipated low turnout. It's going to be confusing as to where to vote, so get it out of the way early.

Block walking will be conducted this Saturday and next Saturday (election day) from 9 a.m until 1 p.m. It breaks down like so:

Once we complete the process of getting Melissa elected, we can turn our attention to getting her husband to run for the Senate.
Posted by PDiddie at Thursday, June 07, 2007