Moneyshot Quotes of the Week

Reviving this irregular series as a result of the newly target-rich environment:

"Ted and I had a discussion. He said homosexuality is genetic. I said, no it isn't. But I just knew he was covering up. They need to say that."

-- Rev. Louis Sheldon, a Christianist from the Traditional Values Coalition, disclosing that he and 'a lot' of others knew about Haggard's homosexuality 'for awhile ... but weren't sure just how to deal with it'.

Obviously the best way to address the troubling issue of the nation's leading evangelical being gay and a drug abuser was to say and do nothing while continuing to rake in the cash from the gullible fools who buy their lies.

"It cannot be just a matter of friendship. It will have to become almost a confrontational relationship. You've got to confess your sins and you've got to have a group of people around you who will not let you whitewash the issue. From the Christian perspective, we think in terms of prayer, we think in terms of what we call godly counsel, where godly men who are clean themselves insert themselves in the life of the one who is struggling."

-- H.B. London, vice president for church and clergy at Focus on the Family, on the spiritual 'restoration' of Ted Haggard

Did he actually say that a gay evangelical can be cured by other 'clean godly men inserting themselves' into him?

Isn't that how all this trouble began?

"Bob Sherwood's seat (in Pennsylvania) would have been overwhelmingly ours, if his mistress hadn’t whined about being throttled."

-- Grover Norquist, excusing Karl Rove for the GOP's electoral wipeout one Congressional seat at a time

Hear hear, Grover. If those bitches would just keep quiet and take their strangling from their Congressmen, the House of Representatives might've retained another Christian soldier to carry on the fight for God and Dubya.

"Our party does not suffer the affliction of being a boiling mad collection of fringe interests with notions so cockeyed that they ultimately rub each other raw and make average Americans cringe."

'Rub each other raw', Joe? You're really going to miss Mark Foley's Christmas party, aren't you?

"I still consider Santorum and Allen among the best and most appealing conservatives on the scene. I believe Santorum has national appeal, despite his loss in Pennsylvania. And although Allen's campaign was knocked off stride, nobody will care much."

Don't you need to be the guy running the RNC, Mr. Levin? Are you by any chance gay? That would be an advantage...

And finally, an old photo needs a new caption: 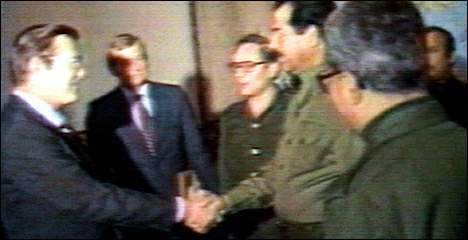