He's Still the One

The WaPo, Firedoglake, and Stephen Colbert have extensively covered John Hall, the first professional rock musician -- "rock" being a loose description, IMHO -- elected to Congress, so go click and read.

He was/is the lead singer for Orleans, which had two megahits in the Seventies, "Still the One" and "Dance With Me". My personal connection is that this music was released in 1976, my senior year in high school. It got plenty of play at our prom, and contained some good makeout tracks from what I can recall; you can listen to a blast from the past here.

That's the album cover of "Waking and Dreaming" on the right (Hall, with more hair, stands in the middle); it's obvious that the radical homosexual agenda was even then seeping into American culture. 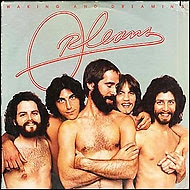 Hall made two appearances on the Colbert Report; the first was in the recurring "Better Know a District" segment in which Colbert sends up an always-hilarious parody of a serious interview. In his bit with the future Congressman, Colbert produced a set of 'smear flash cards'. Hall drew the "My opponent smokes marijuana" one. After he was elected, Hall returned to sing a National Anthem duet with the host (the video snip is linked above).

Congratulations to John Hall, and thank goodness musicians and their fans finally have representation.
Posted by PDiddie at Wednesday, November 29, 2006